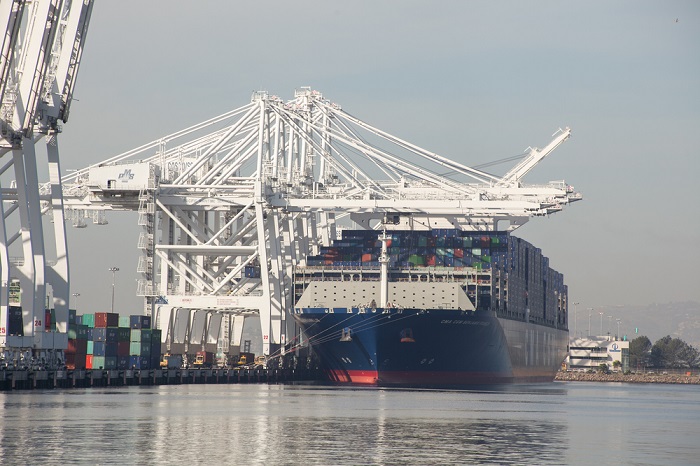 Retailers, manufacturers, and other importers shipped their products early this year, due in large part to the ongoing trade war between the Trump administration and China. (Above: The Port of Los Angeles.) Photo credit: Shutterstock.com.

The peak-shipping season appears to be tapering off — even if there is a last-minute surge ahead of an escalation of tariffs on Chinese goods before the new year — with eastbound Pacific spot rates edging lower from recent highs.

However, spot rates remain well above Week 39 in 2017, 66.7 percent higher than last year’s rate of $1,991 and 64.9 percent higher than $1,414 to the West Coast, according to the Shanghai Containerized Freight Index published in the JOC Shipping & Logistics Pricing Hub.

Retailers, manufacturers, and other importers shipped their products early this year, due in large part to the ongoing trade war between the Trump administration and China. The early surge in imports made July the peak month so far, with US containerized imports 9.1 percent higher than July 2017. Importers fast-forwarded as much of their holiday merchandise as possible to get ahead of the tariffs. Imports in August declined 1.5 percent from the July peak, according to PIERS, a JOC.com sister product.

Declining volumes usually give a boost to marine terminal efficiency. This was the case in Los Angeles-Long Beach, the largest US port complex. Container dwell time declined to 2.7 days in August from 3.1 days in July. The number of containers remaining on the docks more than five days fell to 4.4 percent in August from 6.9 days in July, according to the September dwell time report published by the Pacific Merchant Shipping Association.

Speaking to the Harbor Association of Industry and Commerce Thursday, Mario Cordero, executive director of the Port of Long Beach, and Gene Seroka, executive director of the Port of Los Angeles, agreed that the early building of peak-season inventory this summer will be followed by slower growth in the fourth quarter of the year. This is true not only for retailers who shipped holiday season merchandise early, but also for manufacturers. Seroka noted that about 50 percent of the containerized imports are components for the manufacturing sector.

An indication that the peak had been reached occurred in mid-September when a previously announced general rate increase (GRI) by carriers did not materialize. “Since the beginning of June this year, every trans-Pacific GRI has been implemented, a sign of strong demand [particularly when combined with carriers’ striking service]. That changed this month. The September GRI was canceled, forcing ocean carriers to contemplate a possible early end to peak season,” Zvi Schreiber, CEO of Freightos, said in the company’s weekly newsletter.

Another softening sign: ‘rolling’ of cargo in Asia subsiding

Another indication of slowing growth is that Oct. 1 is the deadline for shipping merchandise from China before factories close for the Golden Week celebration. Normally, vessels overbook and spot rates spike when factories in China close, but the spot rates edged lower this week. That indicates vessel space is not as tight as it was and the “rolling” of cargo to subsequent voyages is subsiding. When cargo is being rolled in Asia, carriers charge premiums to those importers who must book on certain voyages. In the week of June 29, the spot rate to the East Coast jumped to $2,524 per FEU from $2,181 the week before, and the West Coast rate increased to $1,545 per FEU from $1,194 per FEU the previous week. The spot rate increases of more than $300 per FEU reflected hundreds of shipments being rolled at Asian ports.

The volatility in spot rates since summer was a reaction to several developments, including constantly fluctuating capacity. Carriers, fearing in June there was too much capacity in the trans-Pacific, announced they would withdraw three weekly strings of vessels to the West Coast, reducing total capacity about 6 percent, and one string to the East Coast, withdrawing about 1.5 percent of total capacity, in July and August. However, that event was soon overtaken by the tariff announcements and importers shipping earlier than usual. The result was a spike in spot rates. Those rates also included emergency bunker fuel surcharges of $55 to $60 per TEU to recover a sharp increase in oil prices this summer.

When it became apparent that demand had exceeded supply, carriers announced the deployment of “extra-loader” vessels to carry the unexpected spike in peak-season shipments in July and August. Those single-voyage extra loaders brought the trade back into balance, and spot rates continued to increase, but at a slower pace. Carriers have since announced a number of “blank” sailings to take effect in October through December. About a dozen sailings are expected to be canceled over the next three months as carriers and their vessel-sharing alliances prepare for the expected drop in volumes that will occur after the bulk of the holiday merchandise has been shipped.

Moral of the story, supply

Permalink Submitted by ferrullig@minds... on Sep 29, 2018 10:42AM EDT
Moral of the story, supply/demand controls spot market rates and supply/demand is a function of capacity management. At 10% above $3000. to the east coast and 15% above $2000. to the west coast, the fizzle is still there. All of the other analysis is interesting, but suggesting that the fuel surcharges are "to recover a sharp increase in oil this summer" isn't recognizing that bunker fuel prices have been rising for 18 months, not the past three months, and carriers didn't start collecting until this summer - read their financial statements for the first half of 2018. There is a huge difference between the spot market and the Service Contract levels, the carriers have an interesting few months to decide what to do with the Service Contracts for the 2019/2020 TP market.
Maritime News›Trade Lanes›Trans-Pacific
International Logistics
International Logistics›Logistics Providers
Port News
Port News›US Ports›Port of Long Beach
Port News›US Ports›Port of Los Angeles
North America
North America›United States