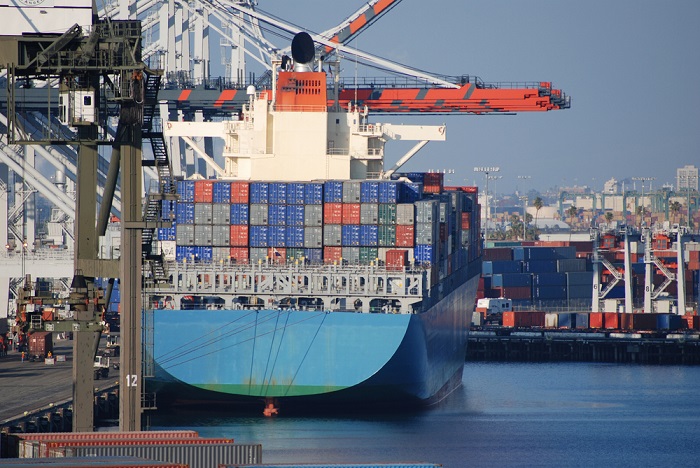 “Clearly, what’s driving the market now are tariffs,” said David Bennett, president of the Americas at Globe Express Services. “The spot rate is extraordinarily high because the market is fearful the 25 percent tariffs will go into effect.” (Above: The Port of Los Angeles.) Photo credit: Shutterstock.com.

Continued strong holiday season imports and front-loading of spring merchandise to get ahead of the 25 percent tariffs on China scheduled to take effect on Jan. 1 indicate that vessel space in the eastbound Pacific will remain tight and spot rates high through the end of the year.

Spot rates in the eastbound Pacific remained at a five-year high of $2,503 per FEU to the West Coast, up 7.3 percent from last week, and $3,304 per FEU to the East Coast, down 0.5 percent, as importers advanced shipments ahead of the pending 25 percent tariff on imports from China.

Indications are that even though the peak-shipping season for holiday merchandise will end in November, this year imports could remain elevated for the remainder of the year if retailers and manufacturers front-load imports before Jan. 1 to get ahead of the tariffs. “We have moved a tremendous amount of volume up this year, and we’ll continue to do so,” due to the tariffs, Alan McTaggart, vice president of global logistics for Techtronic Industries, told the TPM Asia conference last week.

“Clearly, what’s driving the market now are tariffs,” said David Bennett, president of the Americas at Globe Express Services. “The spot rate is extraordinarily high because the market is fearful the 25 percent tariffs will go into effect.”

Zvi Schreiber, CEO of Freightos, said the China-US trade war is sustaining what has been an earlier and longer peak season than in the past. Three rounds of tariff announcements this year “have motivated many importers to advance orders and beat new tariffs,” he said. Conversely, on the Asia-Europe trade lanes, where there is no trade war, spot rates have declined by 32 percent over the past four weeks, Schreiber said.

July has been the peak month of the year so far for US containerized imports, with imports increasing 9.1 percent year over year, according to PIERS, a JOC.com sister product. Although growth slowed to 1.2 percent in August, volumes remained stronger than last year’s record. Los Angeles-Long Beach, which accounts for about 40 percent of US imports, released their import numbers for September, and they show year-over-year growth of 2.2 percent for the port complex.

Although the vast majority of holiday merchandise will have been shipped by early November, retailers and manufacturers in the remaining two months of the year are expected to front-load imports that would have moved in January-early February if there was no fear of a 25 percent tariff hike on Jan. 1. Prebooking of vessels two to three weeks out indicates space will remain tight into November, said Michael Klage, solutions director at TOC Logistics International. Although he anticipates cargo rolling in Asia to taper off once the holiday merchandise has been shipped, space could remain tight due to front-loading of imports to get ahead of the tariffs.

The Global Port Tracker, which is published monthly by the National Retail Federation (NRF) and Hackett Associates, projects year-over-year imports will increase 4.3 percent in October, 2.3 percent in November, and 4 percent in December. The NRF projects retail sales this holiday season will increase 4.3 to 4.8 percent compared with the 2017 Christmas season. It is beginning to appear that the normal restocking of retail inventories that would have begun in January will begin shipping in November-December this year.

However, the extent to which retailers and manufacturers can front-load shipments from early 2019 will be limited by at least two factors. One factor is the ability of manufacturing plants in Asia to ramp up production ahead of schedule, and the other is the trade-off that many companies face between increased inventory carrying costs and the current high spot market rates from shipping early, versus lower carrying costs and spot rates but incurring the 25 percent tariffs by shipping after Jan. 1. “That’s a decision that will be made at the CFO [chief financial officer] level,” Bennett said.

Retailers and manufacturers can’t simply shift sourcing to other countries in Asia because it takes years to develop the manufacturing facilities, logistics capability, and transportation infrastructure needed to support export capacity anywhere near what China already has. “It’s difficult to move away from China in anything approaching the medium term,” McTaggart said.

On the other hand, increased prices on imports will result in reduced sales in the US. If prices on imports increase 10 percent, volumes will drop about 6 percent, said Philip Damas, director, head of supply chain advisors, at Drewry.

Another dark cloud on the horizon is the six-month decline in sales of existing homes, which could accelerate in the months ahead. Mortgage rates, which had remained at historically low levels since the 2008-09 economic recession, hit 5 percent this past week for a 30-year, fixed-rate mortgage, and home prices in many parts of the country are still relatively high, so first-time buyers are being squeezed out of the market. Also, the 2016 tax bill reduces the effectiveness of the mortgage interest deduction. If home sales continue to decline, the home improvement retailers that look to spring and early summer as their peak season could import less than in recent years.

With so much front-loading of shipments taking place in the second half of this year, it appears that spot rates will decline, probably rapidly, after Jan. 1, especially if carriers do not reduce capacity by accelerating the dry-docking of vessels for winter maintenance or simply by canceling sailings, known as “blank” sailings.

February could be a problematic month for carriers next year. Chinese New Year, when many factories in Asia close for a week or two, will be relatively early on Feb. 5. The Global Port Tracker projects that imports will decline 3.5 percent from February 2018. Carriers like to enter the service contract signing period, which begins in March, with leverage from high spot rates during the pre-Chinese New Year rush to move shipments before the factories close. However, if spot rates decline sharply because of the tariffs and the Chinese New Year lull, they may face another disappointing contracting period. Service contract rates in the spring of 2018 declined about $100 per FEU from the previous year to about $1,100 to $1,200 per FEU to the West Coast and $2,100 to $2,200 to the East Coast.