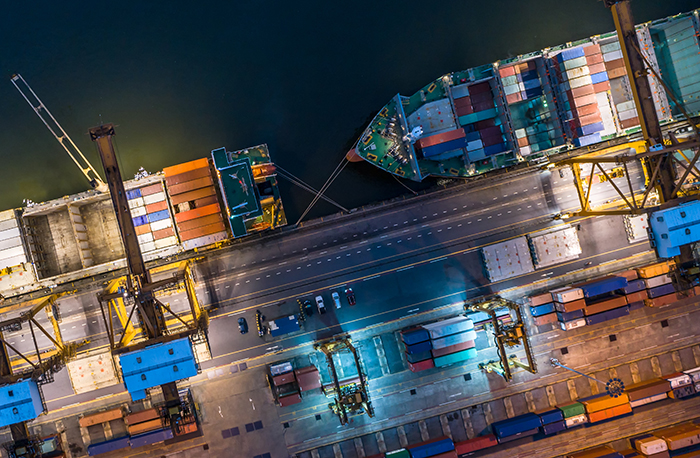 At least one trans-Pacific carrier is pushing a peak season surcharge to take advantage of the surge in demand reflected by higher spot rates. Photo credit: Shutterstock.

Spot rates in the major east-west trades ended 2017 on a high note, posting double-digit increases in spot rates from Asia to the United States and to the Mediterranean. With the Lunar New Year factory shutdowns still more than a month away, further spot rate increases are possible.

The rate for shipping a 40-foot container from Shanghai to the East Coast shot up 22.6 percent from last week to $2,418. The West Coast spot rate increased 29.4 percent week over week, according to the Shanghai Containerized Freight Index published under the Market Data Hub on JOC.com.

US retail sales during the holiday season increased 4.9 percent over Christmas 2016, according to the Mastercard SpendingPulse report released this week. Electronics goods, appliances, and home furnishings, which represent major imports from Asia, were some of the big movers.

Retail sales were generally strong all year, resulting in a robust 6.3 percent increase in imports in 2017, according to Global Port Tracker. Unlike recent years, when retailers entered January with inventory overhangs, retailers in 2018 will have to restock their inventories and prepare for the spring buying season. Also, many factories in Asia will close for a week or two for the Lunar New Year, which falls on Feb. 16, so strong import volumes will fill up ships in the coming weeks and could put further upward pressure on freight fates.

Spot rates in the US trade this holiday season have held up better than in the Asia-Europe trades, where rates had been basically flat since November. Although carrier overcapacity has placed a lid on freight rates in most trades this year, the Asia-Europe trade has been hit especially hard because that is where the largest ships with capacities up to 22,000 TEU first enter service. IHS Markit data project a net increase in vessel capacity in 2018 of 7.1 percent while global container trade will grow 4.9 percent next year to about 144 million TEU.

Freight rates in the east-west trade lanes will probably decline in mid-February and stay low during the slack months in winter and early spring. Continued overcapacity in 2018 is likely to prevent carriers from securing large rate hikes in their annual service contract negotiations with customers in March and April.

As for spot rates, year-over-year comparisons will also be weak through the winter. Hanjin Shipping Co. filed for bankruptcy protection on Aug. 31, 2016. Hanjin had controlled about 7 percent of the capacity in the Pacific, so spot rates spiked in the autumn of 2016 and remained elevated into early 2017. Year-over-year comparisons in the Asia-US trades have therefore been down in recent months. This week, the spot rate from Asia to the East Coast was 22 percent lower than the $3,100 per FEU rate during the final week of 2016. The West Coast rate was down 12.9 percent from $1,923 in late 2016.

Generally, though, freight rates in 2017 have been better than in recent years due to the unusually strong 6.3 percent increase in imports. Economists predict that in 2018 imports will continue to grow, but at a lower rate than this year. Slower import growth, plus continued overcapacity in the new year due to new vessel deliveries, indicate that 2018 will be a year of modest rate gains for carriers.