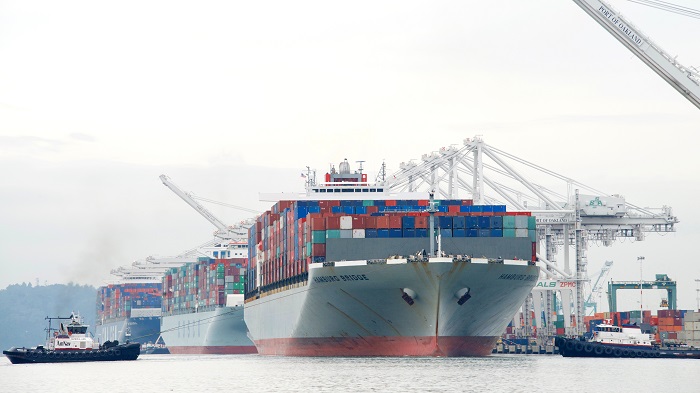 Emboldened by further consolidation in their industry and prospects for moderate growth in imports, carriers in the eastbound Pacific appear poised to achieve “rate restoration” in 2018 in their service contracts, former shipping executive David Arsenault said Wednesday.

“The rate pendulum is slowly shifting,” he told the Propeller Club of Los Angeles-Long Beach. Arsenault, former president of the Americas at Hyundai Merchant Marine, will join intermodal equipment provider Direct ChassisLink, Inc. next week as chief strategy officer. That pendulum swing is visible in terms of US imports from Asia, where growth has accelerated steadily from 2.2 percent in 2015 to 5.5 percent in 2017, according to data from PIERS, a sister product of JOC.com. US imports from Asia hit 15.7 million TEU last year.

Arsenault described a three-year cycle in which spot rates and service contract rates hit bottom in 2016. Last year marked a turn-around, due in part to the Aug. 31, 2016, bankruptcy of Hanjin Shipping Co. and the ability of carriers to carry rate hikes into 2017. Last year also marked the first profitable year for the industry, to show a profit since 2010, an estimated $1.5 billion operating profit in their global operations, according to Drewry Shipping Consultants.

Carriers enter 2018 anticipating the merger this spring of three Japanese shipping lines — NYK Line, MOL, and “K” Line — into a single carrier to be called ONE. Also, completion of the Cosco and OOCL merger will take place this year. These mergers could for the moment mark a break in the consolidation the past two years that will have cut the number of global carriers in half to 10.

Furthermore, the carriers on April 1, 2017, launched a shotgun start of mega-alliances in which four vessel-sharing alliances were reduced to three. Arsenault noted that ports, terminal operators, equipment providers, and others in the supply chain adjusted to the new mega-alliances without any major problems.

The Achilles heel of the liner industry for years has been overcapacity, but the carrier mergers and fewer but stronger alliances have set the stage for pricing discipline because there are fewer carriers and alliances competing for cargo. Previewing the 2018 to 2019 service contracting season, Philip Damas, operational head of Drewry Supply Chain Advisors, warned beneficial cargo owners (BCOs) in a Drewry webinar in September that basing contracting strategy on the expectation of overcapacity and multiple carrier competition “simply won’t work next time around.”

Increased profitability in 2018 will be enhanced further by deployment of larger vessels, with their reduced per-unit costs, the use of technology to streamline operations and an overall focus by carriers on their core services, Arsenault said.

Historically, $2,000 per FEU to the West Coast and $3,000 to the East Coast were the accepted benchmarks before carriers’ per-unit costs dropped with the big ships of 14,000 TEU capacity that can lower slot costs by about $600. However, the equation is also changed when fuel costs increase, as they have recently, and carriers are unable to impose bunker fuel surcharges because of overcapacity in the trade. In any case, carriers normally try to bridge the gap between service contract rates and profitability through general rate increases when market conditions enable spot rate hikes.

Spot rate levels this week, of $1,342 per FEU to the West Coast and $2,319 per FEU to the East Coast, according to the Freightos index, are at a reasonable level by historical standards, before the unusually large overcapacity issues of mid-decade and the Hanjin bankruptcy on Aug. 31, 2016, changed the rules of the game. Spot rates are down 24 percent to the East Coast and 33 percent to the West Coast compared with January 2017. Last year’s rates were still elevated in January as the trade adjusted to the loss of Hanjin Shipping’s capacity and unexpectedly strong cargo volumes. Spot rates are published under the Market Data Hub on JOC.com.

Freightos CEO Zvi Schreiber advised BCOs with imports to ship before factories in Asia close for a couple of weeks beginning Feb. 16 for the Chinese New Year celebrations to book now because “prices will rise soon.”

Carriers could sense that freight volumes this year are running ahead of last year because so far they have announced vessel capacity reductions for the post-Chinese New Year slack period that are running behind blank sailings of recent years. In order to equal last year’s capacity reductions, carriers would have to eliminate an additional 10 sailings to the West Coast and three to the East Coast, according to SeaIntelligence Consulting.

Although carriers continue to seek cost reductions in their operations, the key to rate restoration in 2018 will be pricing discipline, Arsenault said. This could be problematic with carriers scheduled to take deployment of 108 mega-ships of 10,000 TEU or greater. Carriers may be able to exert such discipline because of a stated desire for a greater “profit and loss focus,” he said.