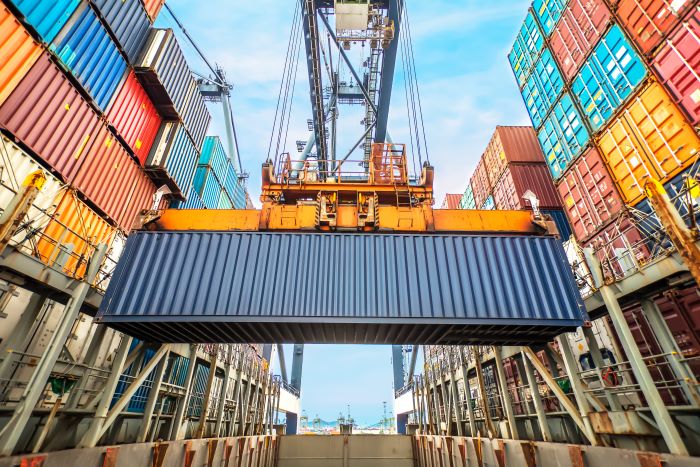 Imports from Asia in the first 10 months of 2019 increased just 0.2 percent amid the US-China trade war. Photo credit: Shutterstock.com.

United States imports from China this year are down 6.9 percent through October, accelerating a downward trend in eastbound trans-Pacific container volumes that is expected to last through the end of the year and possibly into the pre-Lunar New Year month of January.

Imports from Asia in the first 10 months of 2019 were essentially unchanged — up just 0.2 percent, according to PIERS, a JOC.com sister company within IHS Markit. Imports from Asia, not including China, were up 15.8 percent, but with China accounting for 64.1 percent of total Asian imports during the period, growing imports from Southeast Asia were unable to offset the drop in imports from China amid the ongoing US-China trade war.

Imports from China are expected to show even more significant declines year over year in November and December, which last year were unusually strong months in the eastbound Pacific because of heavy front-loading of merchandise ahead of Trump administration tariffs that were expected to take effect on Jan. 1, 2019, but subsequently postponed twice. Imports last December surged 17.5 percent over December 2017 due to the extensive front-loading of merchandise.

With trade analysts projecting dismal year-over-year comparisons in November and December, Alphaliner forecasts that calendar year 2019 import volumes in the eastbound trans-Pacific will decline 2 percent from 2018. “The eastbound trans-Pacific trade will register its first negative year in a decade,” Alphaliner stated in its newsletter this week.

Global Port Tracker had predicted an 8.8 percent increase in November imports over November 2018 as retailers attempt to stay ahead of 25 percent tariffs on $300 billion worth of imports from China due to take effect Dec. 15. But there is now some question if this month’s imports will be that robust.

“The thought was some cargo would move early ahead of Dec. 15, but I don’t see that,” Sur said.

Any front-loading of merchandise in November may have already occurred, as evidenced by recent movement in spot rates from Shanghai to the US West and East coasts. The West Coast spot rate on Nov. 1 increased to $1,588 per FEU from $1,361 the week before, but last week moved lower to $1,532. The East Coast spot rate increased to $2,604 per FEU on Nov. 1 from $2,411 the week before, only to slip back to $2,572 last week, according to the Shanghai Containerized Freight Index (SCFI) published on the JOC Shipping & Logistics Pricing Hub.

A shipping executive told JOC.com this week that after a slight increase earlier this month, advance bookings for the coming weeks were slipping.

However, another shipping executive said while imports in November and December may look weak compared with the exceptional fourth quarter of 2018, eastbound volumes should not be that far off from normal import volumes this time of year.

“Advance bookings are not too bad. I don’t see any disaster ahead,” said Howard Finkel, senior vice president of trade at Cosco Container Lines. The panic over pending tariffs that resulted in front-loading of shipments in the fourth quarter of 2018 is not present this year, he said.

Port and carrier executives are seeing signs that the softening imports will continue through January, which should be a good month as retailers restock their inventories ahead of factory closures in Asia that begin with the Lunar New Year celebration on Jan. 25.

With inventories remaining higher than they normally would be leading up to the holiday shopping period, Gene Seroka, executive director of the Port of Los Angeles, told a press conference in Washington Tuesday that conversations port managers have had with Chinese factory managers this past month produced little hope for a pre-Lunar New Year surge in cargo.

“We are not seeing any type of advancing of cargo like we saw last year in the third and fourth quarters because inventories haven’t been worked down fast enough,” Seroka said.

Others are withholding predictions until they get a better read on store and online sales this holiday season. “It’s hard to say what will happen with holiday sales,” Sur said.