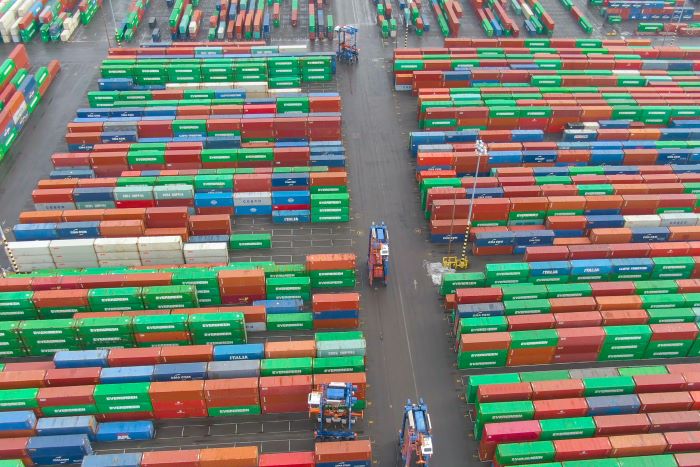 Four Mediterranean Shipping Co. container ships up to 23,000 TEU will be calling at the Port of Los Angeles to reposition a massive horde of empties back to Asia. Photo credit: Shutterstock.com.

A seesaw effect of cargo and empty container movement between Asia and North America is beginning to take shape as the extended China manufacturing shutdown wanes just as suddenly recessionary conditions take hold in North America and Europe.

The combination of Chinese New Year and the coronavirus disease 2019 (COVID-19) crisis that began in Wuhan late last year effectively prolonged China’s annual factory shutdown by several weeks. That delayed both the outbound flow of containerized trade and the repositioning of empty containers back to China.

Now the pendulum has been set in motion. Empty containers that had built up in the United States as a result of the extended China shutdown, to the point where shippers saw difficulties returning them at several LA-Long Beach terminals, are now being repositioned thanks in part to extra loaders. Container availability is drying up for exporters on all coasts and at inland locations. “Our problem is we can’t get enough equipment. It’s pretty bad right now. The (trans-Pacific) westbound is where the problems really are at the moment,” said Trond Prestroenning, CEO for the Americas at forwarder Fr. Meyer's Sohn, which specializes in serving paper/commodity exporters.

Gene Seroka, executive director of the Port of Los Angeles, said a total of four Mediterranean Shipping Co. container ships up to 23,000 TEU will be calling at the APM Terminals and TTI facilities in the coming weeks to reposition a massive horde of empties back to Asia. “We have to reposition these empties so these guys in Asia can be ready to load the first wave of exports,” Seroka said.

In the next swing of the pendulum, despite the suddenly diminished US growth prospects, there remains a large backlog of delayed orders that are set to hit the water in the coming weeks. Analysts and port officials anticipate this will create a non-seasonal surge at US import gateways reminiscent of the highly unusual late-year, pre-China tariff surge in 2018.

“We’re expecting to see a surge similar to what we experienced in the run-up to the tariffs in the fourth quarter of 2018,” said Port of Long Beach executive director Mario Cordero. “We are working to prepare with our [marine terminal operators] to make certain we have fluid operations when that happens.”

Some are downplaying the intensity of the surge, saying that due to rapidly slowing economy any spike could be limited.

"We expect an uptick, but the duration and magnitude of it is unclear at this point as markets are changing rapidly," Rolf Habben Jansen, CEO of Hapag Lloyd, told JOC.com.

Seroka says the Port of Los Angeles Port Optimizer, designed with GE Transportation to anticipate volumes such that the port can be prepared, is signaling a surge seen in customs filings, one of the data sets within the port data portal. “The Port Optimizer says we will see an uptick in mid-late April, and more of an uptick in May. We’re not going to jump from six to 12 ships (daily), but I see a pretty decent uptick in the volume,” Seroka told JOC.com.

This raises a question: Given the US is entering at least a partial lockdown phase, how much imports can domestic supply chains absorb? In other words, what percentage of capacity will be offline as transportation workers follow self-isolation directives from political leaders?

“The volumes outbound from Asia are back and we might have a challenge when they arrive at destination and the receiver warehouse is closed,” said Thorsten Meincke, a member of the Board of Management for Air/Ocean Freight at Schenker AG. As of March 18, California warehousing and other port-supporting operations were continuing, but truckers fear delivery windows at facilities will tighten as more businesses scale back or even suspend operations.

All this begs another question: If the surge coming next month was based on pre-recessionary conditions, what does the rest of the year look like? Will a peak of any kind materialize this year?

In a single month, from February to March, the IHS Markit forecast for 2020 global GDP growth was downgraded from 2.6 percent to 0.9 percent, US growth from 2.1 percent expansion to a 0.2 percent retraction, and the Eurozone from 0.9 percent increase to negative 1.3 percent. Suddenly from the second quarter, both the US and Europe are most likely in recession. IHS Markit is the parent company of JOC.com.

“We assume that the massive shutdowns in Europe and the Americas will lead to cancellations and shortly lower bookings,” Meincke said, noting that “while all key industries decrease, healthcare, health electronics, etc. are massively growing.”

IHS Markit chief economist Nariman Behravesh told JOC.comt that if global growth is downgraded further, which is a distinct possibility, a 1.7 percent contraction in 2020 global GDP growth, for example, could lead to a 5 percent contraction in global trade this year. By comparison, in 2009, when global GDP slid 1.7 percent, trade fell 15 percent, according to Behravesh.

In the near term, one possibility given the already diminished US demand is that volumes arriving in April and May will create an inventory buildup. “The question is, are those imports going to satisfy demand, or as I fear, a lot of it will go into inventory,” he said. “Since those orders, demand has fallen off dramatically.”

The State of Intermodal
END_OF_DOCUMENT_TOKEN_TO_BE_REPLACED