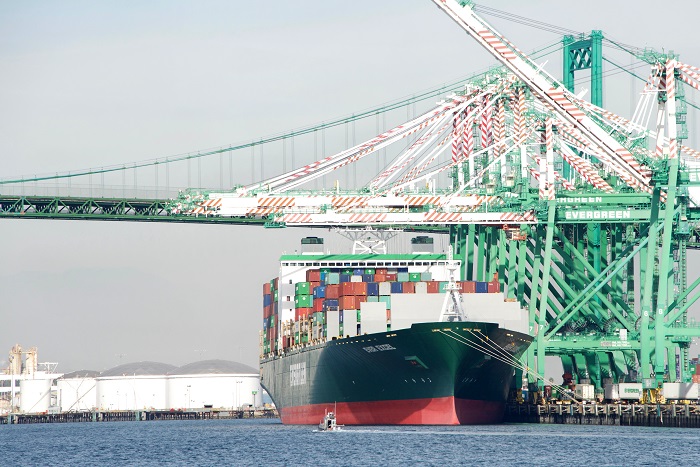 The ongoing uptrend is noteworthy because, historically, the largest increases in spot rates often occur in August, usually the busiest month of the peak shipping season, and October, the last month of the holiday shipping period. (Above: The Port of Los Angeles.) Photo credit: Shutterstock.com.

Emboldened by signs of import strength, and with spot rates higher than usual ahead of the peak season, carriers are pushing for hefty spot rate increases of $600 to as much as $1,000 per FEU in August and September, especially to the East Coast.

“Significant $600-800/40-foot GRIs [general rate increases] are anticipated for early August, which would represent nearly a 25 percent increase in China-East Coast shipments. These are driven by stable shipments, cancelled services and a typhoon that hit Chinese coastal cities early this week,” Zvi Schreiber, CEO of Feightos, stated in the Freightos Baltic Index Update.

The rate hikes are expected to continue in September. Hapag-Lloyd stated in a customer advisory that it will seek a $700 per FEU increase from East Asia to the United States effective Sept. 1, and Evergreen Marine Corp. announced a Sept. 1 increase of $1,000 per FEU from Asia and the Indian subcontinent to both coasts.

Spot rates from China to the East Coast this week increased 7.4 percent over last week to $2,846 per FEU, and 16.2 percent to the West Coast to $1,877 per FEU, according to the Shanghai Containerized Freight Index published under the JOC Shipping & Logistics Pricing Hub. Those late-July price hikes stand out because the largest increases in spot rates often occur in August, usually the busiest month of the peak shipping season, and October, the last month of the holiday shipping period.

While it is not possible to quantify how much of July’s increase in cargo volume was a move by beneficial cargo owners (BCOs) to get ahead of the Trump administration’s import tariffs on some imports of Chinese merchandise, terminal operators say their July was a busy month. “Our volumes were very strong,” Ed DeNike, CEO of SSA Containers, which operates terminals in Seattle, Oakland, and Long Beach, said Friday. However, DeNike said carriers indicate peak season volume increases this year will be “no more than normal.”

Some GRI increases the past month reflected emergency fuel surcharges, as carriers reacted to a 53 percent increase in bunker fuel prices since last summer. However, the surcharges have been applied unevenly. “We pay no emergency bunker fuel surcharges,” said the vice president of transportation at an importer of home improvement products who ships only under contract and avoids the spot market. “Some carriers are pushing for the emergency surcharges, some are not,” said a coffee importer in reference to spot market shipments.

BCOs could also be looking ahead to August and September when carrier alliances will eliminate three weekly services to the West Coast and one to the East Coast, which will reduce capacity more than 6 percent to the West Coast and 1.3 percent to the East Coast, according to Alphaliner. When capacity is reduced between port pairs, vessels in Asia fill up and cargo is “rolled” to the next voyage. BCOs normally get anxious when their cargo is rolled, which makes them more receptive to spot rate increases. “Some carriers are saying, ‘We’ll take your booking, but it will be subject to a roll,’” said the importer of home improvement products.

With vessel utilization rates in July about 92 to 93 percent to the West Coast and 95 to 97 percent to the East Coast, the suspension of services could be enough to generate cargo rolls in Asia next month if space tightens further. However, since excess capacity in the eastbound Pacific this year has been running about 6 percent to the West Coast and somewhat less to the East Coast, the capacity cuts may simple equalize supply and demand. An importer said he suspects that carriers are attempting to “rightsize” their capacity this peak season rather than manipulate rates.

Tight truck capacity nationwide following enforcement of the federal electronic logging device requirement beginning April 1 has resulted in an increase in trucking rates, although so far the capacity has been available for BCOs who accept the higher prices that truckers are quoting. “They realize now that trucking companies are not a commodity,” said Scott Weiss, vice president of development at Port Logistics Group in Southern California.

Another reason why drayage capacity is adequate so far in Los Angeles-Long Beach is that the terminals for the most part are operating efficiently, Weiss said. In past years, terminal congestion resulted in long waits at the gates, which reduced effective trucking capacity in the harbor. “A lot of times we’ve been critical of the ports. They deserve a pat on the back for making the necessary changes,” he said.

Carriers are likely to push any advantages they have in getting higher spot rates this peak season because the service contracts they signed in the spring with their largest customers were a disappointment. Carriers entered the contracting season with hopes for meaningful price increases, but instead they ended up signing contracts in the range of $1,100 to $1,200 per FEU to the West Coast and $2,100 to $2,200 per FEU to the East Coast, which is actually about $100 lower than last year’s service contract rates to both coasts.