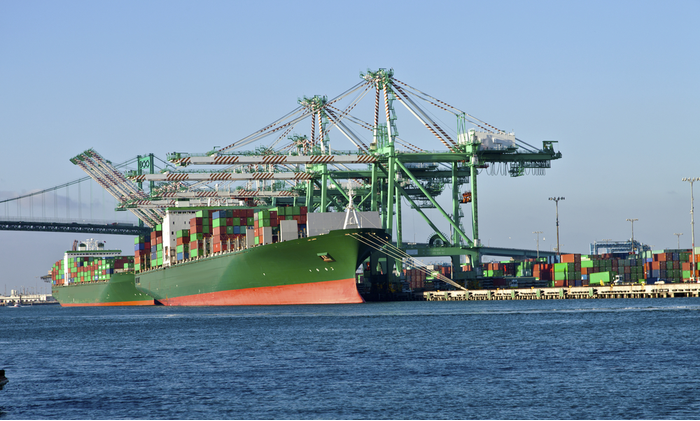 A 4.2 percent increase in the West Coast spot rate and 1.7 percent hike in the East Coast rate does not appear to portend a late surge in US imports from Asia this month. Photo credit: Shutterstock.com.

Spot rates increased slightly in the eastbound trans-Pacific after five consecutive weekly declines, as the effects of Golden Week factory closures in China in early October were reflected in tightening space on vessels that reached United States ports this week.

However, the 4.2 percent increase in the West Coast spot rate and 1.7 percent increase in the East Coast rate may not followed by further increases in the coming weeks. Carriers do not anticipate a late surge in US imports from Asia, as evidenced by their announcement of 29 blank sailings for October and eight in November. Carriers cancel sailings to balance capacity with what they anticipate will be weak bookings in subsequent weeks.

A carrier executive told JOC.com its vessels leaving Asia were booked at “101 percent of capacity,” which is the reason for the slight increase in spot rates. However, in past years shipments were often rolled at Asian ports in the final month of the peak season, which resulted in steeper and more sustained increases in spot rates in October.

The West Coast rate of $1,368 per FEU is down 47.1 year over year, according to the Shanghai Containerized Freight Index (SCFI), published under the JOC.com Shipping & Logistics Pricing Hub. The East Coast spot rate of $2,374 per FEU is 28.1 percent lower than Week 42 last year.

Containerized imports from China fell 9.3 percent in September from the year-ago month, while imports from Asia overall increased just 0.6 percent during what is usually one of the busiest months of the year in the eastbound trans-Pacific. US imports from China in January through September were down 5 percent from the same period last year, according to PIERS, a JOC.com sister company within IHS Markit.

Rather than increasing steadily from week to week as normally occurs during the August-October peak shipping season, spot rates declined steadily from their recent peaks of $2,691 per FEU to the East Coast and $1,615 to the West Coast on Aug. 30.

Trump administration tariffs on imports of consumer merchandise and manufacturing inputs in the year-long trade war with China continue to depress import volumes in the eastbound trans-Pacific. Imports from China declined in seven of the first nine months of 2019 compared with the same months last year, according to PIERS.

Merchandise imports from Asia for the holiday shopping season must arrive at US ports by the end of October in order to be transported to store shelves for the Black Friday sales on the day after Thanksgiving. With only two weeks left in the peak shipping season, and the two to three weeks of transit times it takes for vessels leaving Asia to berth at US ports, most of the peak season shipments have arrived or are on the water.

Retail sales in September were down 0.1 percent from August, but up 4.5 percent from September 2018, according to a statement Wednesday from the National Retail Federation (NRF). “The pullback in September compared with August is possibly a reaction to increased fears over US-China tensions,” said Jack Kleinhenz, NRF’s chief economist.

However, the NRF projects US imports in November will increase 8.8 percent year over year as retailers bring merchandise into the country before the next round of tariffs on Dec. 15. Those duties on $300 billion of merchandise that has yet to be placed under tariff were not addressed in the phase one agreement reached a week ago by US and Chinese negotiators.