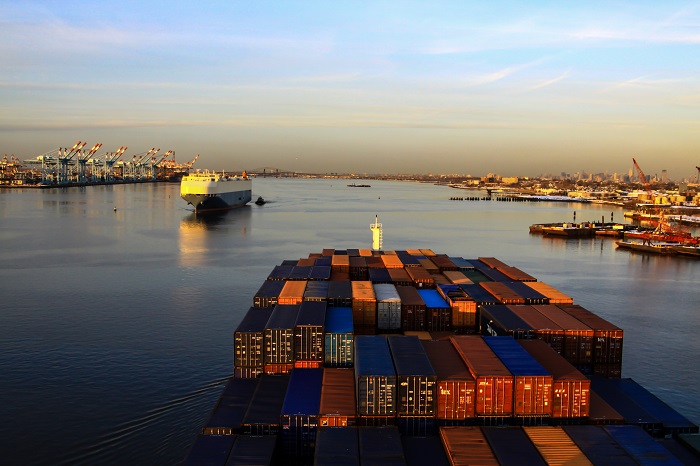 Although trade tensions between the United States and the European Union and their impact have been muted so far in 2018, trade stakeholders know that could change dramatically and quickly. (Above: A container ship approaches the Port of New York and New Jersey as another ship leaves.) Photo credit: Shutterstock.com.

Ocean carriers are cutting services as US trans-Atlantic containerized trade growth with the European Union slowed in the first five months of the year, weighed down by a 0.6 percent decline in exports to 683,881 TEU.

To cope with the slowdown in volume and maintain profitability, trans-Atlantic ocean carriers have optimized their networks. Hyundai Merchant Marine and Evergreen Line in May announced plans to end two trans-Atlantic services, while OOCL announced shortly thereafter that it would withdraw two sailings on its Atlantic Mediterranean Express Service in mid-August and early September. In addition, the Ocean Alliance of Cosco Shipping, CMA CGM, Evergreen, and OOCL canceled its TAT4/TAX loop just two months after its launch. The 2M Alliance of Maersk Line and Mediterranean Shipping Company is restructuring its network to improve schedule reliability.

The slowdown appears to be unrelated to increasing international trade tensions, given the timeline of events and the relatively small amount of volume at stake. Although the Trump administration unveiled tariffs on steel and aluminum imports in March, they did not apply to the European Union until the start of June. The European Union, which announced retaliatory tariffs in May, instituted tariffs in late June on what amounted to 39,145 TEU, or 2.4 percent, of US exports to the European Union in 2017, suggesting that whatever impact the tariffs have on the container trade will be minimal.

Although tensions with China mount, as President Donald Trump recently threatened to implement tariffs on every import from the country, the dispute with Europe is more narrow, focusing on steel and aluminum and a smattering of other commodities chosen for their political symbolism, including jeans and whiskey.

US, EU — despite trade tension, little impact so far

Still, although trade tensions between the United States and the European Union and their impact are muted so far, that could change dramatically if the United States imposes tariffs on auto parts and automobiles, which make up 7.7 percent, or 360,055 TEU, of the total US-EU trade. Auto parts and automobiles made up 7.5 percent, or 227,610 TEU, of the US trans-Atlantic import trade in 2017, and 8.2 percent, or 132,445 TEU, percent of the export trade.

Auto-related goods were the largest segment of import commodities from the European Union in the first five months of the year, and held the No. 1 and No. 3 spots among export commodities to the European Union. The top import commodity, auto parts and accessories, rose 1.6 percent through May, to 84,265 TEU. The top export commodity of cars and vehicles was the second-fastest growing segment over this period, with traffic up 36.3 percent, to 31,290 TEU, while exports of the third-largest segment, auto parts and accessories, fell 1.6 percent, to 26,390 TEU.

Growth in total US-EU containerized automobile and auto parts trade accelerated to 5.7 percent, or 179,132 TEU, through May, as export growth more than doubled to 16.7 percent, or 64,044 TEU, and import growth resumed with a 3.2 percent expansion to 99,950 TEU, according to PIERS.

The fastest-growing Top 10 US import commodity from the European Union through May was unsweetened waters, which rose 23.9 percent to 25,566 TEU, followed by sweetened waters, up 19.2 percent to 14,530 TEU, and furniture and parts, up 11 percent to 62,040 TEU. The fastest-growing Top 10 US export commodity was machines with individual functions not elsewhere specified or indicated, up 48.7 percent to 11,814 TEU, followed by cars and vehicles for transporting people, and articles of plastic, which rose 23.7 percent to 12,875 TEU.

Commentary: Tariffs — How'd we get here, and what do we do now?