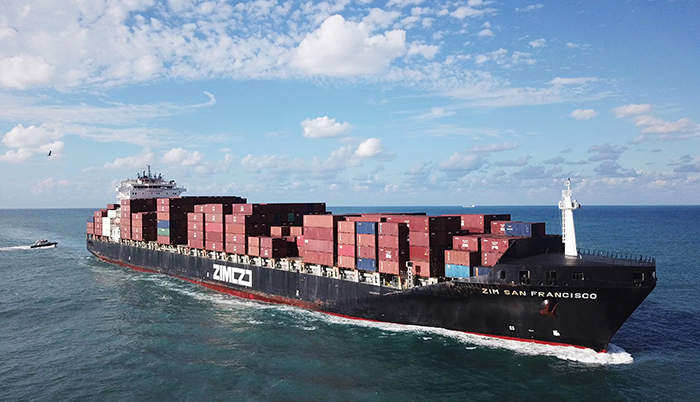 Niche carriers are being squeezed by their larger intercontinental counterparts. Photo credit: Shutterstock.

Container shipping is a giant inverted pyramid with the leading carriers controlling an increasingly greater share of the market.

Once OOCL becomes part of Cosco Shipping and the three Japanese lines operate their container divisions together under Ocean Network Express from April, the top seven carriers will have a market share of 80 percent, according to Drewry.

Data from the analyst show that as of Oct. 1 there were 379 different vessel operators, but apart from 31 carriers at the top of this upside down pyramid, none of the rest have more than 0.1 percent market share.

The analyst said with so many operators on the water, there was clearly a lot of potential for more mergers and acquisitions (M&A), but in reality the major carriers were unlikely to be interested in the smaller ones. More likely, the leading carriers would look to lines in the next tier down that have a little more substance.

“The industry is heading towards a scenario whereby a small handful of dominant carriers dictate matters, but there is still healthy competition in most trades for now,” Drewry said in its Container Insight Weekly.

The 15 carriers grew their operated capacity from 16.27 million TEU in 2017 to 18.32 million TEU on Jan. 1 2018, based on Alphaliner records. This figure includes capacity operated by companies that were acquired during the period. Global liner capacity in 2017 increased by 3.9 percent from 20.69 million TEU to 21.51 million TEU.

The main gainer last year was the Maersk Group, whose operated capacity grew by 26.8 percent to reach 1.8 million TEU on Jan. 1 2018, up from 1.62 million TEU twelve months earlier with its takeover of German carrier Hamburg Süd responsible for much of the capacity increase. Without the purchase however, Maersk would still have grown organically by some 10, Alphaliner said.

But the healthy competition that still exists in the market was giving smaller carriers a run for their money. Shipping analyst SeaIntel said niche carriers were being affected by the consolidation and capacity injection by the alliances and were rapidly losing ground. The analyst found that the niche carriers were coming under increased competitive pressure as they were marginalized.

The analyst said at the same time, the niche carriers themselves were reducing in terms of vessels operated as they increase their vessel sizes in pursuit of scale advantages. This, however, was reducing their ability to field a detailed granular network, further exposing them to competitive pressure from the larger carriers, SeaIntel found.

The larger carriers are all heading for profitability when their 2017 financial results are released over the next few weeks, despite being unable to rid themselves of some self-sabotaging traits, Drewry said.

Despite a strong increase in container volume through the peak season period, freight rates went in the opposite direction. From a June 30 high of $1,015 per TEU, the spot rate declined steadily to reach a 12-month low of $681 per TEU by Oct. 21, according to the Shanghai Containerized Freight Index weekly data on east-west trade lanes tracked at JOC.com’s Market Data Hub. Analysts believe carriers putting in extra loaders contributed to the surplus capacity on the route and kept downward pressure on rates.

Drewry remains positive that the carriers are indeed heading for their brighter future although the analyst acknowledged that there were several temporary factors that have created bumps in the road to recovery.

One area the analyst felt could have provided a more immediate benefit was the significant consolidation occurring in the market, but after reflection said the fact that M&A have not so far materially changed anything was not that surprising.

“The latest consolidation wave has barely become operational, with most transactions either just concluded or still pending. Moreover, even after all of the latest deals are finalised, they alone do not have sufficient weight to move the industry all the way to being a non-collusive oligopoly, which we previously outlined as being necessary to herald a new era of liner paradise,” Drewry noted.

“If anything, we perhaps overlooked the risk that the merger activity would make some predators more aggressive with their pricing, to minimise customer attrition.”

This price cutting may be playing out on the Asia-Europe trade when many shippers and forwarders have finalised their annual service contracts on the trade. Shippers tell JOC.com that the 12-month contracts they have fixed with carriers are at roughly the same levels as those secured in 2017, while forwarders say their contracts for 2018 are below last year’s levels by 5 to 7 percent.

The logistics manager of a major Europe-based shipper said he went into the first round of tendering with the carriers fully expecting his contract rates to be at least 10 percent higher than those of 2017, which was where the carriers began their tenders. But by the time the negotiations were finalised there was virtually no difference in the rate compared with the previous year.

Asked if he was concerned that spot rates would fall well below the contract levels this year, the shipper said he typically kept 20 to 30 percent of his cargo for the spot market. “I know that rates will go down and this give me room to manoeuvre,” he said.

Besides, this, look at vessel

Parcel vs. LTL: Managing Big and Bulky Shipments Without Breaking the Bank
Global Shipping Outlook: What Will 2022 Hold?
Port Performance North America: When Will the Bottlenecks Ease?
END_OF_DOCUMENT_TOKEN_TO_BE_REPLACED