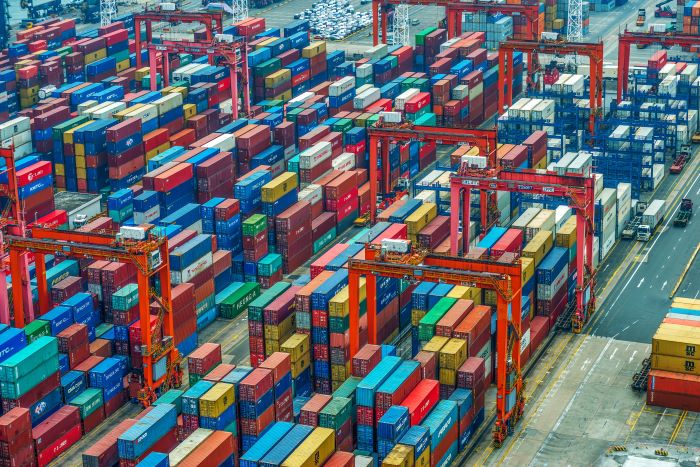 The World Bank has forecast Asian exports could fall between 13.5 percent and 36.2 percent this year. Photo credit: Shutterstock.com.

Intra-Asia container volumes are set to post monthly year-on-year declines for the rest of this year as carriers struggle with the fall in both regional trade and export volumes to key markets in Europe and North America amid the demand-killing COVID-19 pandemic.

At the same time, the mounting international war of words over China’s initial handling of the coronavirus outbreak and the potential exodus of multinational manufacturing from China could see a shift in trading patterns, supporting other regional economies and bolstering intra-Asian volumes, shipping executives said.

In a commentary on May 26, Sand said the "intra-Asian trade, a precursor for what will be exported from the region in coming months, was down by 13.1 percent” in the first quarter.

He did not give any forecasts for intra-Asia volumes for the rest of this year. “There are still plenty of virus containment measures in place,” Sand said. “Manufacturing may be ready, but new export orders are [at a] record low. Inventories are full and demand to clear them [is] not within clear sight.”

A spokesperson for Sealand Asia, Maersk’s intra-Asia subsidiary, told JOC.com the market outlook for intra-Asia is “too uncertain” to provide any specific guidance on market trends and expectations for this year.

These estimates were echoed by Dutch bank ABN AMRO in a market report that forecast Asia's emerging economies would see GDP growth of 1.7 percent this year compared with 5.2 percent GDP growth in 2019, although growth next year in countries such as Thailand, Malaysia, and the Philippines would see 5 to 6 percent growth.

Still, Andrew Jillings, Hong Kong-based chief executive of freight forwarder Tigers, echoed the uncertainty over the current outlook. “Frankly, I’m not confident we will see a strong market recovery this year,” he told JOC.com. “With job losses increasing and uncertainty around COVID-19 infection rates and the possibility of further lockdowns should there be a second wave in the winter, I expect the traditional Christmas peak to be unusually soft.”

But Richards cautioned, “I would expect volumes into Thailand, owing to the negative impact on the tourism sector, and the Philippines and Indonesia, both due to lockdowns, will be under pressure for the foreseeable future. Also, Japan’s economy remains weak.”

While container volumes are deteriorating, Richards said regional operators have less opportunity to blank sailings compared with the top 10 carriers, although generally higher freight rates have been supportive.

“For a smaller independent player that has built up a niche and customer base over time, the decision to cancel sailings and disrupt customers’ supply chains becomes tougher,” he said.

China’s exports up in April

Siong Seng Teo, executive chairman and managing director of Singapore’s Pacific International Lines, said China is already starting to bounce back from the collapse in manufacturing that resulted in the extended Lunar New Year holiday as China tried to contain the virus. China’s exports grew by a better-than-expected 3.5 percent in April, while analysts were forecasting an 11 percent contraction.

SITC Line, the Hong Kong-headquartered, Chinese-owned regional carrier, said average rates per TEU rose to $570 in the first quarter of this year compared with $551.50 per TEU between January-March 2019.  Tim Huxley, chief executive of Hong Kong’s Mandarin Shipping, said the sector is “suffering most” due to the lockdown in India, which has taken away a lot of intra-Asian trade. “Once we get a gradual opening up of that market, regional trade should get back on its feet, but we really need to see a significant return of the main export markets — Europe and the US — to stimulate demand,” he said.

Maersk is raising rates with a peak season surcharge from South Asia to Asia until May 31.

“Rates are expected to remain competitive post-COVID, given the number of existing intra-Asia players that are likely to be able to adjust their capacity and vessel deployments to meet the change of market demand,” PIL’s Teo said.

BIMCO's Sand said spot rates are “artificially high” due to the scores of blank sailings. “But it kind of disguises the losses underneath as volumes have evaporated,” he said.

Despite the trade woes, operators are continuing to launch new services.

SITC, with about 80 ships totaling 116,958 TEU, according to Alphaliner, took delivery of two 2,400 TEU container ships in March while also launching an express reefer service between Qingdao in northern China and Vietnam earlier this month.

Tigers said it is launching an LCL reefer service between Fremantle, Australia, and Singapore in conjunction with Seafrigo Singapore that is specifically targeting cargoes of fruit, vegetables, meat, seafood, wine, and beer.

“The intra-Asia trade is highly dynamic and there are new services starting every month and services withdrawn as well so it is better to look at overall volumes rather than number of services,” Alphaliner executive consultant Tan Hua Joo told JOC.com. “At this point, total trade is down but not as badly as other long-haul trades.”

“We are seeing that the intra-Asia trade is OK. It hasn’t been as badly hit as the long-haul trades,” Danny Hoffmann, managing director of Hong Kong-headquartered Gold Star Line, told JOC.com. “There is quite a lot of cargo movement between China and southeast Asian countries, with a lot of movement of reefer cargo for seasonal fruit and vegetables.

“Some companies I’ve spoken to are planning to diversify production, moving a percentage back to their home market and some to other countries to reduce their high exposure to China and still control costs,” Hoffmann added.

Japan has already announced it will allocate the equivalent of $2.2 billion to lure Japanese manufacturers out of China, with $2 billion earmarked for firms to shift back to Japan and $200 million to move to other countries. The US and British governments are also looking at ways to move production of some products from China amid claims of a coverup during Beijing’s initial handling of the virus outbreak.

Hoffmann pointed out that three countries — Vietnam, Thailand, and India — are favored to be among the biggest winners.

“Vietnam is a strong contender to get a massive inflow of investment as industry shifts from China, with banks supporting the growth of new industries,” he said. “Thailand is offering tax holidays of up to three years for new industries establishing manufacturing facilities involving pharmaceuticals and chemicals etc., while India is creating a strong land bank of 2,500 square kilometers (965 square miles) which it will offer to new investors willing to set up manufacturing plants.”

Nelson Sequeira, Singapore-based senior director at regional container line X-Press Feeders, said there has been talk of shifting manufacturing to avoid the existing over-reliance on China. “Vietnam, Thailand, Indonesia, and India may benefit from this, but it may not be immediate because China has established infrastructure and inherent strengths which other countries, perhaps with the exception of Vietnam, may take time to replicate,” he said.

Casper Ellerbaek, senior vice president of seafreight at Kuehne + Nagel (Asia Pacific) Management in Singapore, said companies had been diversifying their supply chains even before the COVID-19 pandemic. “Additional cross-border sourcing of raw materials and components will potentially create a surge in intra-Asia volume,” he said. “Efforts to reduce geopolitical and other risks by individual companies act as a multiplier of this trend, which, in return, implies a greater need for logistics support.”