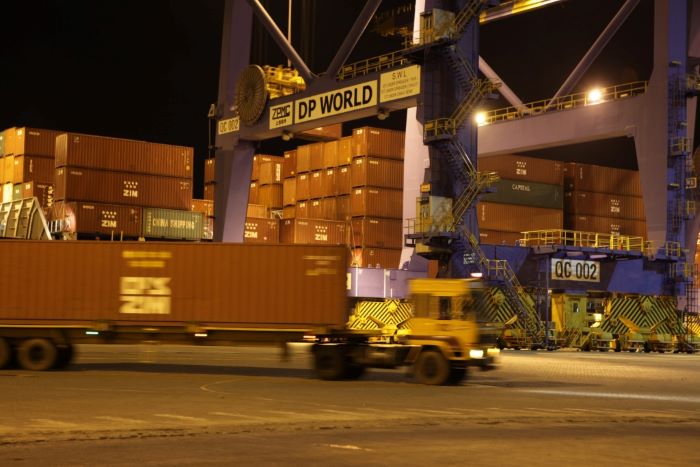 DP World is pinning high hopes on its Vallarpadam Terminal at Cochin, India

A good portion of Indian east coast containers currently transshipped over foreign hub ports will likely find their way from origin to destination without short-haul relays, with a new mainline direct South India-to-North Europe shipping link due to open in late October.

Hapag-Lloyd will lead a vessel-sharing agreement — branded as the South-East India – Europe Express (IEX) Service — in conjunction with Ocean Network Express (ONE), Yang Ming, and Cosco/OOCL.

A total of nine vessels with a capacity of 6,500 TEU each will be deployed on the weekly loop, with Hapag-Lloyd contributing four ships. The IEX will have five port calls on India’s east coast — Visakhapatnam, Krishnapatnam, Chennai, Tuticorin, and Cochin — extensive coverage that can provide shippers with faster transit times than they have ever had, either through existing direct connections or the traditional transshipment mode.

“Our customers have been talking to us about their growing needs in the Indian and Bangladeshi markets, and we have been listening. The introduction of the IEX is a game changer, as it will be the first dedicated direct service from Southeast India to Europe, offering connectivity to the global network of Hapag-Lloyd,” Maximilian Rothkopf, the carrier’s chief operating officer, said in a statement.

Foreign transshipping has been more pronounced in India’s east coast region, where most major ports lack the necessary water depth and other infrastructure capabilities, as well as sufficient gateway traffic, to woo large-size mainline calls.

Amid those concerns, the new service, designed with portwide coverage, will be a boon for the export-import community in and around the southern region. Industry data shows out of a total estimated 4.5 million TEU shipped in and out of the country’s southeastern markets, as much as 2 million TEU are generally transshipped over foreign hubs, with Colombo commanding the largest amount.

The new call addition is particularly seen as a watershed development for Cochin, given that the harbor hosts India’s first full-fledged container transshipment terminal, operated by DP World. The $600-million Vallarpadam Terminal began operations in 2011 but has thus far struggled to make any significant mark on its efforts to recapture Indian cargo transshipped through Colombo due to limited mainline connectivity — a shortcoming the Dubai-based company largely attributes to excessively high vessel-related charges applied by the landlord port. While industry groups are becoming increasingly vocal about the need to scale down port charges to encourage direct calls, any immediate positive outcome might, however, prove elusive with tariff regulations in place.

Officials at DP World Subcontinent were not immediately available for comment on the impending call addition at Vallarpadam (Cochin).

A May 2018 cabotage law modification, which opened intra-country transportation of laden export-import containers for transshipment and empty containers for re-positioning between Indian ports to foreign fleets, appears to have somewhat slowed the pace of foreign transshipment, with cargo aggregation gaining ground on the back of improved coastal networks. New port data collected by JOC.com for Chennai, Visakhapatnam, and Cochin signals that trend. For example, out of a total 595,000 TEU in fiscal year 2018-2019, Cochin’s direct destination moves hit about 60,250 TEU, against 556,000 TEU and 19,850 TEU, respectively, in the prior year.

Indian ports handled a combined 16.5 million TEU in fiscal 2018-2019, with foreign transshipment accounting for about 3 million TEU. That compares with 3.2 million TEU transshipped out of a total 15.3 million TEU the previous year.

The Indian government maintains that cabotage reform is still in its early stages and that its full benefit will be visible over a longer period.

Mainline direct calls covering Indian trades have thus far been essentially concentrated on the country's west coast, with Jawaharlal Nehru Port Trust (JNPT) and Mundra being the focal points because of infrastructure and gateway cargo considerations.

With leading mainline carriers slowly showing greater interest in expanding their Indian port calls beyond their hotly sought-after trade corridor, it is expected that the emerging container market in the country will see further growth.