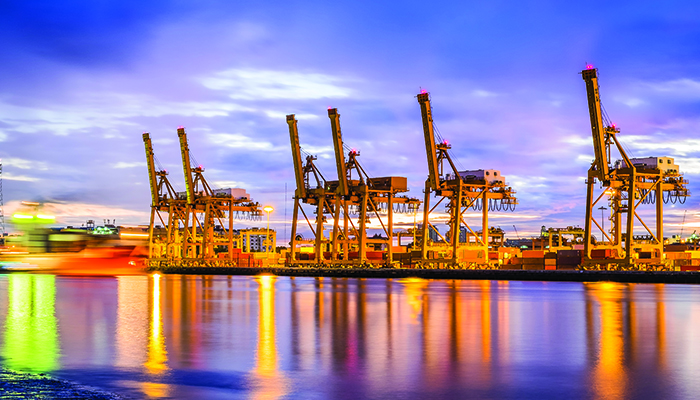 Fierce competition, weak freight rates, and infrastructure shortcomings at many ports across Asia are making life difficult for ocean liners in the world’s largest container trade.

One in four containers that moves around the world is carried in the intra-Asia trade, which has more than 70 shipping lines and 10,000 port pairs. And there are tons of submarkets within the trade, according to Tim Wickmann, CEO of MCC Transport.

Intra-Asia is expected to grow just about 3 percent in 2016 and slightly better in 2017, but it comes from a very large base. What you won’t see in that 3 percent is that trade growth was very uneven in 2016, with Wickmann calling it “the most awkward growth scenario” he’s seen.

“All the growth is coming from China. There is no growth from any of the other countries in the intra-Asia market,” he said. “Taiwan and Japan have dropped by double digits on the intra-Asia trade, but China is such a dominant market that when China grows, the whole trade grows.”

Yet even with the growth, intra-Asia profitability is following the same path as other east-west trades and is unlikely to improve in 2017. The fragmented nature of the trade and the cutthroat competition places relentless downward pressure on rates, dragging prices to levels that make it impossible to improve yields.

“MCC is blessed with the ability to break down every cost component of moving a container, so when we give a rate to our customers, we know exactly how much money it provides,” Wickmann said. “On many trade lanes on intra-Asia, the freight rate only barely covers the variable costs of moving a container on and off a ship. It means we are sailing the ships for free in many corridors. It is pure charity, because there is no money left after paying for the costs to pay for the ship."

“And the scary part is that our cost structure is lower than it has ever been,” he said. “There is not much more we can do to sail our ships cheaper than we are already doing. What will happen when the oil price increases?”

There are 97 weekly services and 29 carriers involved on the route from Northeast Asia (Korea, North China, and East China) to Cambodia and Thailand, Wickmann said. The competitive scenario is different from the long-haul trades because instead of alliances, there are a host of vessel-sharing agreements and slot-sharing with most carriers also using competitors’ services.

Edoardo Podesta, managing director for Asia air and sea logistics at Dachser Far East Asia, said the Germany-based company is growing fastest in intra-Asia compared with other trades. “But intra-Asia is less subject to the typical peaks in the West,” he said. “It has a more stable flow of cargo, and the transit times are reduced to maybe four days, so the planning needs are less than on the Europe and US trades.”

Hyundai Merchant Marine, which is bidding for the intra-Asia network of collapsed South Korean counterpart Hanjin Shipping, has said it will focus on the trade as it tries to return to profitability, and Thailand’s Regional Container Lines believes growth in Association of Southeast Asian Nations member states will start to bring supply and demand in the region into balance.

In an earlier interview, Robert Sallons, managing director of CMA CGM’s intra-Asia specialist Cheng Lie Navigation Line, said intra-Asia consisted of hundreds of corridors where one or two carriers might have a big market share on some trades, and on other corridors many lines may only have a small market share.

But an area that has long been a concern in the regional Asian trade is infrastructure. Although trade is growing and the smaller ports are expanding berths and adding equipment, the infrastructure behind the ports is unable to handle the rising container volumes.

The disastrous port congestion that occurred in Manila in 2014 wasn’t because of underperforming terminals, Wickmann said, “but because the infrastructure did not work. Myanmar had an 11-day holiday this year, but the cargo still poured in. The ports are in the middle of the city and there is no decent infrastructure, so the ports were quickly full, and we had to wait two weeks to get a berth.”

But Bangladesh, Wickmann said, is currently the worst port to call in Asia. “The ports are swimming in containers, and the cargo is still flowing in, so it is impossible to get a berth,” he said. “All this is not helping the intra-Asia carriers when freight rates are as low they are.”

Increasing vessel frequency has become a way for MCC to mitigate the port delays. “When a ship is delayed and has to omit a port, there is another ship coming just a couple of days later,” Wickmann explained. “With Bangladesh, the ships are waiting three to six days. You can add a ship to your service, but that doesn’t increase your capacity because it is just sitting there, waiting. It has only one effect for a shipping line, and that is additional cost.

“The other alternative that we are doing in Bangladesh is to increase our frequency. We now have four and sometimes five vessels, so even though one ship is waiting, there is another on the way,” he said. “That adds capacity.”

Freight Data Insights Report: A Look Back To Look Ahead
Download