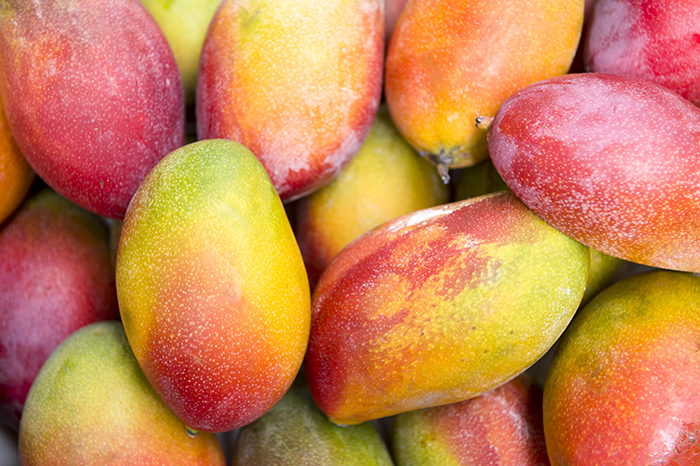 Exports of mangoes and apples have been key contributors to growth in the Brazil-Europe trade. Photo credit: Shutterstock

East coast of South America (ECSA)-Europe freight rates of between $1,300 and $1,500 per TEU are expected to maintain those levels or increase in the coming weeks as strong demand for fruit exports keeps ships full.

Brazilian exports of fresh fruit rose 8.5 percent in the first half, to around 44,600 TEU, led by a 60 percent surge in apples to 6,790 TEU, and a 32 percent jump in mangoes to 6,500 TEU, according to Abrafrutas, a Brazilian association of fruit producers and exporters. In value terms, fruit exports rose 18 percent to $274 million.

“We have seen freight rates remain fairly steady over the past year, which also helps our members,” said a spokesperson for Abrafrutas, which represents 39 different fruit producers responsible for more than 85 percent of all Brazilian fruit exports.

The outlook for the northbound leg from the ECSA to Europe is “much brighter” as the northbound trade has “started to turn the corner” and the southbound trade “continues to strengthen” as the country emerges from recession, according to industry analyst Drewry Maritime Research, which believes there is the potential for both legs to be balanced by year’s end.

In terms of northbound trade, Brazil is three months into its north and northeast fruit export season, and the addition of extra loaders seems not to have had any impact on freight rates.

“Fruit is a market that Brazil is keen on expanding, and the extra loaders will help that during the peak export season [August to the end of February],” said Simon Heaney, the senior manager for container research at Drewry.

Freight rates have risen $150 between August and October to $1,450 despite the extra loaders, according to Drewry. Maersk Line has added tonnage to its Pecem Express service while CMA CGM has introduced a North Brazil Express extra loop with vessels of 1,750 TEU and 500 TEU of refrigerated plugs.

Freight forwarders in Rio de Janeiro and São Paulo have reported spot rates of $1,300 to $1,500 per FEU from Santos to Rotterdam for dry boxes.

Contract rates have remained steady at about $1,000, according to data from Drewry and rate management platform Xeneta, which has recorded long-term contract rates of between $850 and $1,000 per FEU for the last 12 months.

“Long-terms rates seem to be holding up nicely with fairly stable rates on that [ECSA to Europe] corridor, especially for dry boxes,” said Patrik Berglund, CEO of Xeneta.

The extra loaders and extra port calls by carriers have been a boon for fruit exporters, according to Abrafrutas.

Maersk’s extra services out of Pecem have proven particularly attractive to shippers, according to Ivanildo Barbosa, a commercial manager for Special Fruit, which exports about 10,000 tons of mangoes and 5,000 tons of grapes each year, mostly to the United Kingdom, Belgium, Germany, Holland, and Spain.

"At Special Fruit we try to avoid ships that make too many calls,” said Barbosa. “And in Pecem, we are able to embark the cargo on a line that goes straight to Rotterdam. This is very important for exporters such as us, who carry perishable products such as fruit.”

Out of the 600 40-foot containers Special Fruit exports each year, 50 percent now move via Pecem, he said.

Rates have been steady despite the extra capacity because of high levels of utilization, which hit 80 percent in August and were forecast to come in at around 73 percent in September, according to Drewry.

The strong performance on the export trade to Europe extends to imports from the region, with that trade recording 13 straight year-over-year monthly gains, with seven of those months coming in above 10 percent, according to Brazilian data company Datamar. Growth in August and September was above 10 percent.

Drewry forecasts that exports to Europe and the Mediterranean will grow by 20,000 TEU in the fourth quarter as imports expand by 30,000 TEU.

On a rolling 12-month basis to the end of September, overall export volume to Europe came to 743,000 TEU and import volume was 787,500 TEU, according to Drewry.

Brazil’s recession and the depreciation of the local currency, the real, from 2.2 per US dollar in 2013 to 4.2 per dollar in January 2016 led to a steep drop in Brazilian imports from Europe, but as the currency and economy have recovered, so have Brazil’s imports from Europe. The real now sits at 3.3 per $1.

As a result, southbound volumes have risen 12 percent year over year in the first nine months of the year, and 2017 will be the first year the trade will record annual growth since 2013, according to Drewry. Exports from North Europe to the ECSA rose 10 percent in the first three quarters to 442,000 TEU, and those from the Mediterranean increased 17 percent to 181,000 TEU.

The northbound trade has not fared as well but has grown 1.8 percent in the first three quarters after a rough start to the year due to severe weather in the south of Brazil, which closed Itajai, the chicken export capital of the world, for nearly three weeks. A poor coffee harvest also weighed on export growth.