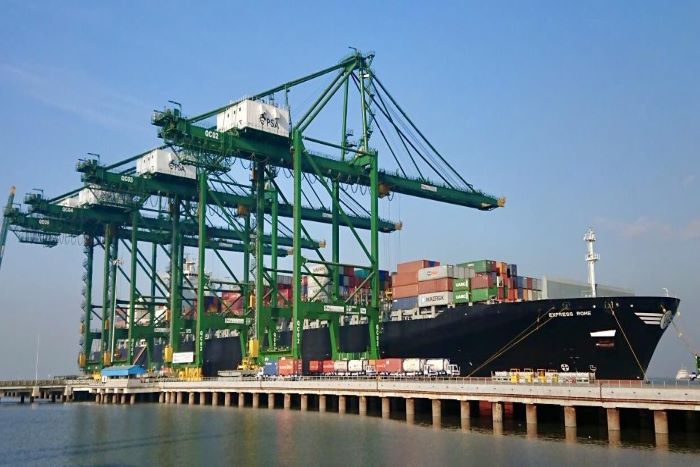 Average westbound spot rates for cargo shipped from the Indian ports of Jawaharlal Nehru Port Trust and Mundra to Felixstowe in the UK have jumped over 20 percent in March. Photo credit: PSA India.

Ocean freight rates on all key trade lanes to and from India have seen double-digit upward movement in early March, reflecting the effects of large-scale vessel capacity reductions and equipment shortages due to disruptions related to the coronavirus disease 2019 (COVID-19).

Average westbound spot rates for cargo shipped from the ports of Jawaharlal Nehru Port Trust (JNPT) and Mundra to Felixstowe in the United Kingdom have risen over 20 percent to $1,100 per TEU and $1,500 per FEU, as carriers imposed fresh general rate increases (GRIs), according to JOC market research.

Leading the rate push, French liner CMA CGM revised its freight all kinds (FAK) rates for trade from India’s northwestern region to Northern Europe and the Western Mediterranean at $1,250 per TEU and $1,500 per FEU, effective March 1.

General carrier tariff rates from JNPT/Mundra to the US East Coast (New York) have continued their northward trajectory seen over the past month, fueled in large part to an uptick in demand.  Average rate levels on that trade lane are hovering at about $2,000 per TEU and $2,400 per FEU, up 25 percent from the end of February.

A March 2 GRI announcement by Hapag-Lloyd that will come into force April 1 in line with the US Federal Maritime Commission’s 30-day advance notice requirement suggests carriers are looking to take advantage of a more favorable spot market. The German container line plans to hike rates on India-US trades by $500 per TEU and $600 per FEU for all types of cargo. “In light of current market conditions, we will apply a new general rate Increase from [the] Indian Subcontinent [India, Bangladesh, Pakistan, and Sri Lanka] and Middle East to [the] USA and Canada,” Hapag-Lloyd said.

However, average spot rates on the US East Coast-West India leg continue to remain more or less at the same levels they were last month.

At the same time, the coronavirus has had a major impact on the usually lowest-priced intra-Asia trade lanes, which typically meet much of the equipment repositioning for the region. From JNPT/Mundra to Shanghai, average spot rates have increased to $150 per TEU and $200 per FEU from $100 and $150, respectively, around mid-February. Rate levels have also surged on the return, to about $650 per TEU and $850 per FEU from $400 and $500 two weeks ago.

Anand Babu, co-founder of digital marketplace specialist FreightBro, told JOC.com the coronavirus outbreak has severely disrupted supply chains, especially for importers who are overly dependent on Chinese manufacturing. “In simple terms, the first quarter of 2020, in terms of results, is and will be negative to all stakeholders in shipping and logistics or the [entire] supply chain segment,” he said.

According to Chennai-based FreightBro, when freight demand rebounds, capacity will likely become extremely tight, which could, in turn, have an inevitable knock-on effect on freight rates.

“With the headhaul being impacted from China, we can estimate a dearth of empty equipment availability across the world,” Babu said. “This shortage of equipment will have an impact on exports owing to the huge imbalance that is anticipated, and ... equipment leasing companies cannot fill in for this large-scale demand.”

According to provisional port data collected by JOC.com, in the wake of several blank sailings on India-Far East trades, JNPT had lower inbound volume in February — at 213,000 TEU out of a total of 416,500 TEU, or 51 percent. That compares with 225,100 TEU out of 426,100 TEU in January, or 53 percent. Import figures for Mundra were not immediately available.

“With vessels being blanked and widening headhaul-backhaul cargo imbalances that necessitate empty repositioning from costlier alternative locations, we could see further traction in rates until the coronavirus threat is contained,” an industry observer told JOC.com.