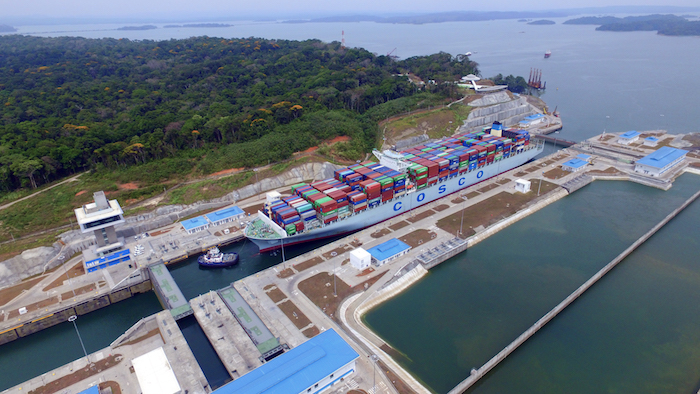 A Cosco Shipping vessel is towed through the new locks of the Panama Canal.

By tweaking its toll structure, the canal authority hopes to attract more two-way traffic by container lines as they continue to revise service networks after a global restructuring of operating alliances and a flurry of industry consolidation.

The proposed toll changes would be the first since the canal opened new locks last June that allowed transits of ships with capacities as high as about 13,000 TEU, compared with the 4,500 to 5,000 TEU of the canal’s older locks.

Canal officials have sought to maximize toll revenue while keeping the waterway competitive with alternate routes including the Suez Canal and intermodal container gateways at US West Coast ports. A loyalty program providing discounts for high-volume container lines remains in place.

Panama Canal tolls vary according to a ship’s type, size, and cargo load. The new container ship formula would reduce backhaul tolls for New Panamax ships that were at least 70 percent full on their headhaul voyage through the canal.

To qualify for the discount, ships would have to return through the canal within 25 days., excluding time at anchorage or in Panamanian ports.

The increase for LPG and LNG vessels was attributed to the popularity of the larger locks for those vessels, and to the operational restrictions posed by those ships’ cargoes.

“The proposed changes reflect the changing nature of the demand in the main routes, utilization levels, and productivity of the New Panamax locks,” the canal authority said. “This adjustment leads to the assessment of a fair price while maintaining the competitiveness of the route.”

The canal authority will accept comments until July 3 and will hold a public hearing in Panama City on July 5 on the changes, which were proposed after meetings with canal customers and industry representatives in Europe, Asia, and North America.

Canal administrator Jorge Quijano said the meetings were “extremely valuable in providing us with a deeper understanding of the industry today, the challenges faced by individual market segments, and the projected demand for the New Panamax lock.”

“The proposed modifications safeguard the competitiveness of the waterway, the value of the route, and facilitates the canal's goal of providing an efficient and reliable service to the global shipping community," Quijano said.

How to Improve OTIF: 15 Tips for On Time and In Full Delivery
END_OF_DOCUMENT_TOKEN_TO_BE_REPLACED