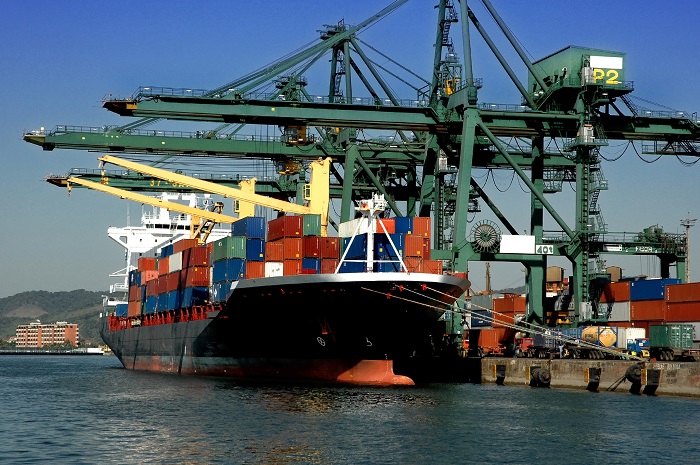 Although volumes and rates on the Asia to east coast South America trade are rising, capacity is not keeping pace, and one substantive business model reason may be at the heart of why ocean carriers are reluctant to ramp up service. (Above: The Port of Santos.) Photo credit: Shutterstock.com.

Furthermore, at least some maritime contracts being signed in the United States over the next month will affect the Brazil rates — the reason shippers in Brazil monitor them.

As Drewry noted, the 40 percent capacity cut on the southbound route, from seven services to just three, over two years has led to “the trade existing for the past two years with only three weekly services, on which a remarkable 11 different operators share space with one another.”

One small, extra service, a fortnightly from Pacific International Lines (PIL), joined the trade in April. Beyond that, gradual capacity increases from deploying larger vessels has increased capacity by 4 percent in the 12 months through March 1, according to Drewry. However, Drewry noted that despite the increase, southbound utilization has “been at or above 100 percent since last summer.”

Moreover, because demand has exceeded supply, ocean carriers have been able to maintain high rates since the start of 2018, with Drewry’s Container Freight Rate Insight reporting average Shanghai-to-Santos spot rates of $2,990 per FEU in February, up 25 percent from February 2017.

However, freight rates from China to Santos, Brazil’s leading port (with 3.85 million TEU handled in 2017), are slightly below last year’s rate: $2,118 per FEU this year versus $2,200 per FEU, according to the SCFI. A dip is, of course, rarely appreciated by ocean carriers, but this is still a very good rate compared with where the free-falling, loss-making rates were just over 20 months ago. The current rate has also jumped 32 percent since May 4.

What’s more, carriers don’t need long memories to recall the SCFI reporting some rates at less than $100 per FEU — back in January/February 2016 — a memory that has likely played a role in current capacity discipline.

“Short-term rates have been trending upwards since the beginning of the year and if you look at the contracts negotiated during April they are, on average, about $400 per FEU higher, so projecting forward [to July] they should be at around $2,590 per FEU,” Berglund told JOC.com. “With the long-term contracting we are seeing them at a substantially higher level than the previous averages, so we expect them to trend upwards.”

“This trade lane is still volatile, moving up and down all the time, but in general the market is at a very healthy level,” he added.

One Santos-based executive for an Asian carrier said he has been scratching his head over the past month trying to work out why freight rates are not even higher from China to Santos, given current, tight capacity. “Vessels are coming into Santos close to full capacity and sometimes containers are rolled over because of the lack of space, so it is surprising to me that the rates haven’t been even higher over the first months of this year,” said the experienced manager. “Also, exports out of Brazil have also been picking up throughout this year and we expect them to do even better now that the real is devaluing again against the US dollar.”

According to SeaIntel, Hamburg Süd is trying this week to implement a general rate increase of $700 per container from ECSA to Asia, and Hapag Lloyd is seeking a $500 per box increase as well. There are also reports ocean carriers are trying to push them through on selected southbound voyages.

The Santos executive added that it was also “very surprising that no one has added more capacity to take advantage of that,” adding that there were rumors PIL might soon add additional tonnage.

Another carrier representative, a São Paulo-based shipping agent and expert on the Far East-to-Brazil market, added that he, like Drewry’s report, found it “very strange” that no one was prepared to add services, given there are so many players, 11, in just three services.

One reason for the lack of service additions could be that there is not sufficient dry cargo on the return back-haul leg. Much of the back-haul trade is reefer cargo, chicken, beef, and pork shipments to various Asian destinations, so there is demand for empties on the return leg. However, part of the snag of not wanting to take a risk on a stand-alone service is the lack of substitute ports and trades.

Or as Alan Murphy, CEO of SeaIntel Maritime Analysis, explained, “Carriers have been very sensible keeping capacity low in this trade lane,” he told JOC.com, “and there seems to be limited substitution options and that is why, I think, there are still only three services — plus PIL’s small add on — and that is why they have been able to keep rates high.”

Murphy said that for a carrier to go alone, or with just one partner, they need a guarantee of regular demand and sometimes that can be met by adding a “substitute trade.” One example is some carriers on the backhaul unload selected dry containers in South Africa, but South Africa is not interested in the main offerings from ECSA — reefer cargo and fruit — as it has its own produce. “But Asia to Europe, for instance, can call on the Indian subcontinent, as a substitute, on the backhaul. South Africa does not offer such an alternative for Asia to ECSA, so it all depends on supply and demand, and, of course, the price of oil. With so few services, a small increase in sailings or one more service can have a dramatic effect on pricing, and that is why this trade is so volatile.”

A survey of 10 freight forwarders and non-vessel operating common carriers confirmed that spot rates from China to Santos for an FEU stuffed with furniture would cost $2,250 to $2,500 to ship, if the loading was within the next month. All surveyed said they expected freight rates to be higher in two months and beyond, and four of them said they were also “very surprised” there were not more services on this trade lane.

Rod Riseborough, CEO at Container Trade Statistics (CTS), also confirmed that rates have been increasing on the Asia-to-ECSA trade lane since the start of the year. The CTS index shows rates up 3 percent from February 2017 to February 2018 and up 1.5 percent from March 2017. Since then they have dropped back slightly. “The big issue on this trade lane is there is a major concentration of carriers into three services and with volumes going up carriers are putting in extra loaders. Cosco certainly did this and others are following suit from time to time. It will be interesting to see what happens next, if more capacity or a new service is added,” Riseborough said.