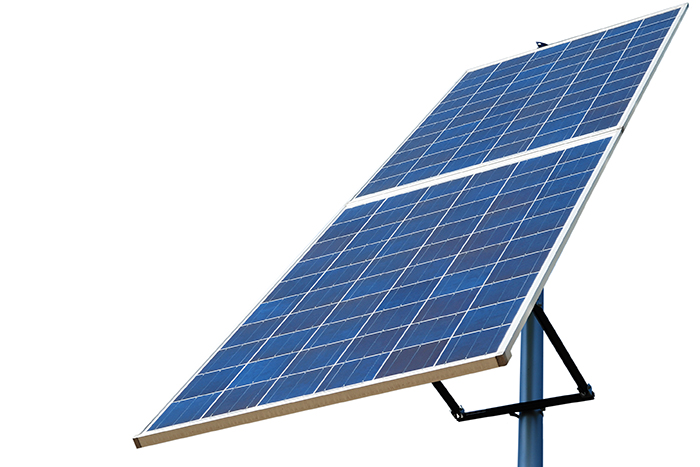 US imports of solar photovoltaic cells (PV) soared in 2019 as project developers rushed to beat a year-end “safe harbor” tax credit deadline. Inbound volume surged 129 percent to 165,366 TEU for the year, up from 72,296 TEU in 2018, according to data from PIERS, a sister product of JOC.com within IHS Markit.

“Safe harbor is an incentive that drives companies to load up their supply chains,” Ralph Stierli, vice president of sales and operations for Solaris Global, told JOC.com. Solaris, a subsidiary of global forwarder Fracht, has 5 gigawatts (GW) of solar energy components stored in its 3 million square feet of indoor and outdoor storage space, Stierli said in early May.

Safe harbor is a provision of the investment tax credit (ITC) law that allows developers to continue qualifying for the current-year ITC in two ways: They can begin significant physical work on a solar project, or they can spend 5 percent of the project’s total cost on significant materials. These actions must happen before the year ends, however. In 2019, the credit was 30 percent. As of Jan. 1, it was reduced to 26 percent.

Without the safe harbor ITC, there would be no incentive for solar developers to import their materials so early in the construction cycle, because prices tend to fall over time, Thomas Ruch, a solar consultant and advisor who is working with Solaris, told JOC.com.

“The classic plan for project construction is develop, purchase, construct, deploy,” Ruch said. “With safe harbor, this sequence is changed. You buy the materials as your first project activity. The process is distorted.” But the upside of that change — the 30 percent tax incentive in 2019 — reduces project costs by an amount that is three times greater than the cost of storing those materials, he said.

Stierli estimates a solar power plant costs approximately $1 million per megawatt (MW) to build, from procurement to the point of grid connection and energy distribution. One megawatt, he says, generally calls for four to five FEU of solar modules, two to three truckloads of racking (construction) materials, and another one or two truckloads of inverters, transformers, and cables — a total of seven to 10 containers per MW. A utility-scale PV project of between five and 20 MW is considered small, according to IHS Markit, while large-scale projects range upward from 20 MW.

At the same time, the safe harbor credit complicates materials handling because much of the imported PV won’t be needed at job sites for weeks, months, or even longer, particularly if COVID-19-related restrictions on labor, social interaction, and movement affect installations.

Developers need materials to arrive in the United States early to take advantage of the tax break, but the construction side needs project materials to arrive in order at the job site only as they are needed, said Helge Biernath, CEO of Sunstall. Sunstall works with Solaris to install utility-scale solar farms for engineering, procurement, and construction companies (EPCs) and their developer clients. A 100-MW project would stretch approximately four miles by two miles, Biernath said, depending on the terrain. That means receiving materials as they are needed and staging them properly, avoiding unnecessary movement, is crucial to efficient construction, particularly on large sites.

“My dream is to apply the methodology of manufacturing on the job site,” Biernath told JOC.com. “You need the parts in order, in the right quantity, and on the right date.” Of course, this becomes more difficult when the procurement cycle is accelerated by an outside force such as the safe harbor tax credit.

As of early May, IHS Markit is tracking a pipeline of more than 167 GW of solar energy in development in the US. Of this, about 10 GW are under construction, according to Cormac Gilligan, an associate director with IHS Markit who focuses on solar and energy storage research. Before the COVID-19 crisis sent the global economy reeling, the US was expected to install more than 20 GW of solar energy in 2020. That forecast has been decreased by about 20 percent, to 16 GW, said Gilligan, and it could be reassessed again as the pandemic plays out. Of the present growth forecast, 13.5 GW should be utility-scale projects of 5 MW and up, he said. These projects are the primary drivers of the “safe harbor” cargo bump.

In the larger global context, US solar development is an outlier in that it is still forecast to grow despite the pandemic, Gilligan said. While solar components cost more in the US than they do in the rest of the world due to import tariffs, demand is strong due to state-level regulatory support and growing competitiveness with other types of energy production, according to IHS Markit.

The Trump administration’s import tariffs on solar cells and manufacturing components were intended to encourage US production of components. Instead, the effect has been a shifting of sourcing away from lower-cost China and toward markets such as Vietnam and Malaysia, further increasing costs for US installations. Section 201 tariffs specifically target PV, while Section 232 measures increase the price of imported steel and aluminum, used in construction, and Section 301 duties on a wide range of Chinese-made goods make semiconductors used in inverters and modules more expensive, according to industry publication Solar Power World.

Five US ports accounted for 73 percent of imports of solar PV to the country during 2019. The ports of Los Angeles and Long Beach led the pack with a combined 57,607 TEU in 2019, a 97 percent increase from 2018; New York–New Jersey was second with 18,540 TEU, a 34 percent increase. Savannah, Houston, and Jacksonville, the remaining three of the top five, all saw huge percentage jumps from low bases in 2019, likely due to safe harboring. Savannah saw its solar PV import volume skyrocket 464 percent to 18,199 TEU for the year, Houston’s imports jumped 591 percent to 13,279 TEU, and Jacksonville boosted its volume 139 percent to 12,679 TEU.