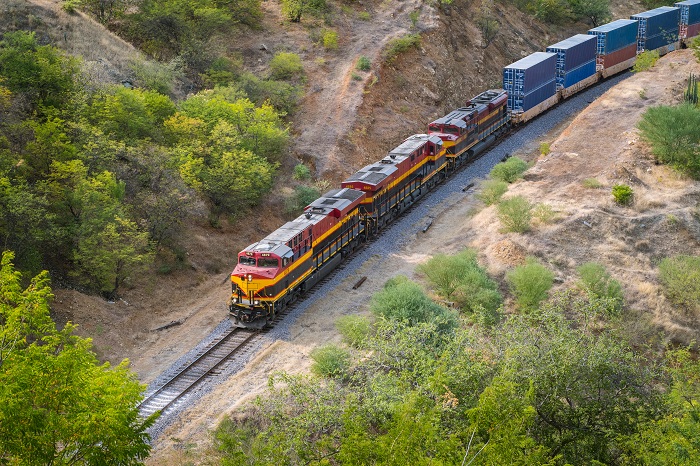 Like other emerging markets, it is a “bad news, good news,” circumstance for Mexico. The bad: surface transportation and logistics operations are straining to meet shipper demands. The good: Mexico appears to have arrived on the global trade stage, with all key metrics advancing. (Above: A freight train travels in Mexico.) Photo credit: Shutterstock.com.

MEXICO CITY — With China imports up by 11 percent in the first half and expectation of a strong peak season for Asia imports, shippers are questioning whether Mexican ports and inland networks are ready for the pre-winter holiday shipping season and the broader, long-term rise of containerized volume.

Transportation providers and shippers at the JOC Mexico Trade Forum on Aug. 1 warned that in addition to rising cargo thefts, truck capacity to move goods from the interior to port, and vice versa, is tightening and is set to accelerate when new trucking regulation takes effect at the end of this month.

Loaded TEU handled by Mexico increased by 7.1 percent in the first five months of 2018, SCT figures show, and Sealand estimates that imports from Asia are up 11 percent this year, on last.

“We have seen in the last few years that the waterside part in Mexico has actually improved a lot,” said Reto Malfatti, managing director for Kuehne + Nagel SA de CV, Mexico, adding that past experiences of lengthy delays for ships waiting to get into Mexico’s West Coast ports have diminished.

“The challenges and the bottlenecks are on the inland,” he said. “And that is an inherited situation for many, many years of not enough capacity available in trucking, with also railroad capacity being at the limit, at least when it comes to and from the ports. … There is a shortage of transport capacity in Mexico.”

Mexican trucks, in large part small operators, carry 80 to 85 percent of the cargo going through the country, and trucking companies have struggled to find drivers, similar to the difficulties in the United States but with a less severe impact.

The pressure on Mexico’s trucking capacity ticked up in June when a new federal government rule took effect that required that double-tractor trailers — known as “fulles” in Mexico — go through a certification process that some trucking groups said would be expensive and onerous, and would result in some companies taking trailers off the road, at least in the short term.

Under the trucking rules that took effect in June, truck owners must submit paperwork to the government that demonstrates tractor trailers used in a double-trailer formation are fitted with certain features, including anti-lock brakes, a global positioning satellite system, a regulator that restricts the vehicles to 80 kilometers an hour (about 50 mph) and low emission levels.

A second test of the industry comes at the end of this month when a new regulation restricting driver hours kicks in. Truck drivers are required to take a 30-minute break every five hours, and the law limits them to driving no more than 14 hours, after which they must take an eight-hour break. Drivers also must keep a logbook documenting their driving hours.

The requirement — unlike a US rule introduced in December — does not require truckers to document their driving time with an electronic logbook, and so gives Mexican drivers some wiggle room. The US law has triggered double-digit year-on-year increases in spot and contract trucking rates, and widespread concern about a chronic driver shortage, with trucking companies refusing work because they have plenty already. The inclement trucking terrain is expected to last for another 18 months, without a dramatic fall in demand.

Yet the Mexican law has nevertheless raised concerns that it will limit driver hours, and further crimp the sector’s capacity available to shippers seeking to move cargo. So far, it is not clear how vigorously the law will be enforced. Other concerns about the law include where the drivers will rest — some in the industry say the country has far too few rest areas — and whether the stationary cargo will be more vulnerable to theft and attacks while the driver is stopped.

Mauricio Rojas, vice president for international trade compliance at Grupo Prodensa, said the driver limitations would mean that long trips that extend beyond the 14 hours a driver can do in one day would translate into diminished trucking capacity.

He cited the example of a truck move from the Port of Lazaro Cardenas to Laredo, a destination 24 driving hours away.

“So that's going to create a constraint on truck drivers who will either take more time to get to the border and you will need more truck drivers,” he said. “And eventually that's going to rise up the cost of transportation and companies are going to start looking into the railroad.” Another challenge that the cargo transportation industry faces is a lack of sufficient intermodal infrastructure, which would allow the easy transfer of containers from road to rail, he said.

The railroad companies say they have plenty of available capacity to handle additional capacity. Ferromex, a subsidiary of Grupo México Transportes, said it operates at 60 percent capacity, even after rail has increased its share from 5 percent of cargo movements in the country to the current figure around 20 percent.

Continuing that growth, however, will require Ferromex in part to overcome shipper doubts about the safety of moving cargo by rail, said Luis Olivera, executive vice president of sales for Ferromex. Although rail has in the past been considered safer than sending goods by truck, it has in recent years suffered a rising level of attacks and theft.

"The challenge is to convince the market that they will be safe, and it’s something we can do with a lower cost,” Olivera said.

Mexico is undergoing a $5 billion upgrade of its port system, with 25 projects, the most prominent of which is a major upgrade of the Port of Veracruz on the Gulf Coast, which is scheduled to open next year. Other projects that have improved efficiency at the ports, some largely funded with private investment, include a new container terminal in Tuxpan, the semi-automated APM terminal in Lazaro Cardenas, and the new rail tunnel in and out of the Port of Manzanillo.

Craig Mygatt, CEO of SeaLand, a Maersk Line affiliate that serves mainly the United States and Latin America, said the company is already struggling with an equipment imbalance due to an 11 percent increase in imports from Asia, and a decline of 8 percent in exports to the same region, in large part due to China’s refusal this year to accept imported foreign waste.

“That creates a bit of a flow problem for containerization,” he said, because it results in too few containers in Asia for future shipments.

Tariffs just the precursor regarding US ag exporters' pain