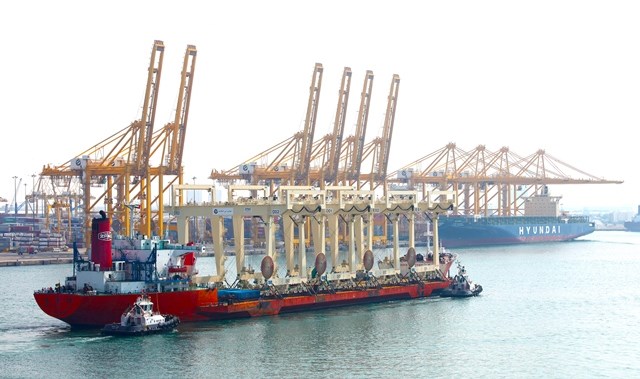 HONG KONG — Container shipping lines are enjoying strong westbound traffic growth to South Asia and the Middle East, giving carriers a ray of hope at a time when the shared trunk services from Asia to Europe are struggling, Drewry reported.

In its Container Insight Weekly, the analyst noted that box traffic from Asia to the Middle East and Indian Subcontinent started 2015 with year-over-year growth of 8.7 percent, according to data from Container Trades Statistics (CTS). This followed a very similar growth rate for the whole of last year.

Drewry said first-quarter growth for the trade from Asia to the Middle East increased by 1 percent, overshadowed by a rise of 17.9 percent from Asia to South Asia (India, Pakistan, Bangladesh and Sri Lanka). However, anecdotal feedback from carriers suggested that volumes to the Middle East were much stronger than those reported by CTS, even as close as indicated for South Asia, which if proved correct would necessitate a statistical revision, the analyst cautioned.

According to one major carrier that Drewry spoke to, consumer spending in the Middle East was on the rise and many construction projects were being built in readiness for the 2020 World Expo in Dubai. The pre-Ramadan cargo spike, which falls this year on June 18, has begun and westbound load factors are said to be in the 90 percent range.

Based on the possibly underestimated CTS numbers, Drewry believed the longer-term trend remains healthy with the rolling 12-month average of westbound volumes to the Middle East currently at 5.6 percent. For South Asia the rolling average was up to 13.3 percent

Westbound Asia-Middle East Ship utilisation was estimated to have fallen to below 70 percent in March, although Drewry said that figure was likely to be upgraded at a later stage and better things were expected in the coming months. It felt this view was supported by the rise in spot rates for April with Drewry’s Container Freight Rate Insight reporting that Shanghai to Jebel Ali rates increased by 15 percent in April to $1,420 per 40-foot container.

Ships were equally full on the Asia-South Asia trade with the recent trend improving from a low base, Dreary said. Container Freight Rate Insight found Shanghai to Nhava Sheva rates shed $40 in April to $1,170 per FEU, suggesting a reversal of the supply-demand balance trend.