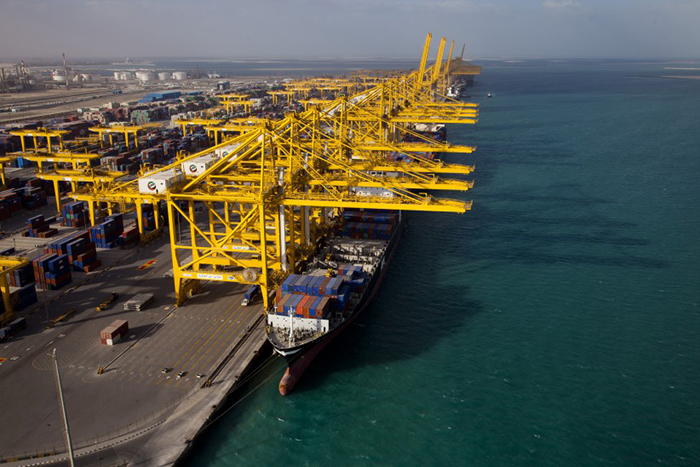 Jebel Ali is benefiting from rapidly growing transshipment from India.

Short-sea ship operator Qatar Navigation Lines is ramping up its feeder coverage between India and the Middle East to tap into growing transshipment volumes on the route.

The company has introduced a new feeder service connecting the port of Kandla, a major gateway on India’s west coast, directly to Jebel Ali, United Arab Emirates, as well as Dammam and Jubail, Saudi Arabia.

The fixed-day weekly service, deploying two vessels, will begin with the M.V. Oshairij arriving at the Kandla International Container Terminal on Feb. 4, according to a company announcement.

“The service, named KDX [Kandla Dammam Express], will provide rice exporters in North India with a cost-effective solution for their supply chain as KICT will provide a direct train link between Northern India’s inland container depots and the container terminal,” QNL said.

KDX is also positioned to capitalize on rising shipments from Gujarat to Dammam and Jubail, the announcement said.

QNL said the new loop is part of its growth plans following its entry into the Indian market in 2015 with a direct feeder link between Jawaharlal Nehru Port Trust and Doha.

“This will certainly bolster trade ties between the Gulf region as a whole and India, as well as further broaden our feeder network within the Indian Subcontinent and the Gulf," the feeder line said.

Notably, the expansion comes as Indian demand for transshipment at Jebel Ali is picking up pace. An analysis of statistics collected by JOC.com showed fiscal year 2015 to 2016 volume of transshipped containers via Jebel Ali for India’s major, or public, ports jumped 50 percent year-over-year to 91,000 twenty-foot-equivalent units from 56,000 TEUs.

QNL is part of Doha-based Milaha Group, with a diversified portfolio of maritime activities that include ship agency and port-based logistics services.

The new feeder operation is a major gain for the publicly owned Kandla port, which has long struggled to make an impact on the container front because of previous terminal concession issues between domestic infrastructure company ABG Infralogistics and Singapore’s PSA International. That dispute culminated with the port trust scrapping the concession awarded to the ABG-PSA consortium in 2006 and signing a new contract with Mumbai-based J.M. Baxi Group following competitive bidding procedures.

J.M. Baxi in February last year set up KICT as a special-purpose company to upgrade, maintain and operate Kandla’s container-handling facility, which includes a 545-meter (1,788 feet) quay, a 13-meter draft, and an annual capacity of 600,000 TEUs.