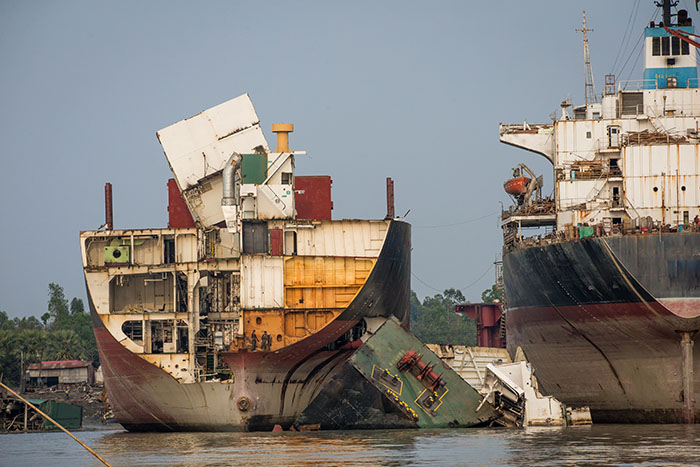 Scrapping has been a big factor in the decline of the idle container ship fleet.

The idle container ship fleet has dipped slightly as leading carriers added extra services in the run-up to the Chinese New Year vacation, but is set to rise again in the coming weeks, according to Alphaliner.

The level of that increase in the idle fleet and its impact on spot rates will serve as a useful barometer for shippers looking to measure the capacity discipline of container lines.

There were 336 unemployed ships with an aggregate capacity of 1.3 million 20-foot-equivalent units, equivalent to 6.4 percent of the global fleet, as of Jan. 23, down from 351 vessels of 1.41 million TEUs two weeks earlier, the industry analyst said. A good portion of of that idle tonnage consists of ships formerly owned or operated by Hanjin Shipping. Two-thirds of Hanjin’s former fleet remains unemployed.

The drop in unemployment has also been driven by the high scrapping rate that saw 24 ships of 79,000 TEUs — including 11 classic Panamax vessels of 4,000 to 5,100 TEUs — arriving at the breakers’ yards.

“The welcome fall in idle figures could be short-lived, as the idle fleet is expected to rise again in February, with most of the main carriers canceling sailings during the post-Chinese New Year period.”

Overcapacity in the chronically oversupplied classic Panamax sector continues to decline, with 56 vessels currently seeking work — down from 62 two weeks ago and 90 at the jobless peak in October following the enlargement of the Panama Canal that allowed the transit of ships up to 14,000 TEUs.

Thirty three of the currently jobless Panamax ships are laid-up and can sail once they are reactivated, which can taken several weeks for those in need of dry-docking — but demolition seems the most likely outcome for many of these jobless vessels.

Panamax charter rates have stalled at rock-bottom levels with Israeli carrier Zim Integrated Shipping Services extending the charter of a 4,330-TEU ship for two to 12 months at a daily rate of $4,350 and France’s CMA CGM hiring a 4,252-TEU vessel for two to seven months at $4,250 a day.

The Panamax fleet has fallen to 563 ships from 643 two years ago, but a further 100 will need to be scrapped before the segment can regain its footing, according to Alphaliner.