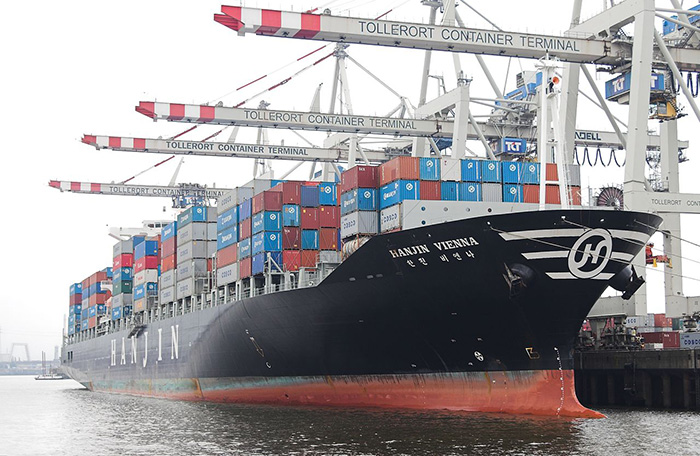 The Hanjin Vienna, pictured, is one of two ships that have languished in Canadian waters after offloading cargo at their Canadian port call for the last two weeks.

Canadian importers and exporters’ frustration is mounting after two Hanjin vessels — one set to sail to Tokyo and another to Seattle — have been stranded in Canadian waters for more than two weeks.

Although the Hanjin Scarlet with a capacity of 4,600 twenty-foot-equivalent units was unloaded at the Port of Prince Rupert Sept. 8 after a deal was worked out with DP World, the operator of the Fairview Container Terminal, the ship is still off Prescott Island. The Hanjin Vienna left GCT Deltaport at the Port of Vancouver in the early morning of Sept. 2 and has been stranded off nearby Victoria since the the tug Saam Smit arrested it in Constance Bay. The 5,744-TEU ship was set to call the port of Seattle, but authorities haven’t received any updates on when or even whether this will happen.

“Everyone is waiting now until the receivers figure out where this and other vessels can dock safely,” said Ruth Snowden, executive director of the Canadian International Freight Association. “It will be weeks and months before those goods can reach their customers, if they ever do.”

It is not just Hanjin that has been impacted by the arrests, but also its former CKYHE Alliance partners Cosco Container Lines, “K” Line, Yang Ming Line, and Evergreen Line, along with other ocean carriers that have looser slot-sharing agreements with the liner.

The Busan Port Authority at the outset of the crisis estimated that as many as 540,000 containers were caught up in the Hanjin network. The company has made progress in unloading containers still at sea, but as of Satruday 34 ships remain stranded worldwide, according to statistics provided by Hanjin to the Ministry of Oceans and Fisheries.

Outside South Korea and the United States, courts in Japan, Singapore, and the United Kingdom have extended Hanjin bankruptcy protection. In the coming weeks the company’s petitions for similar protections will be heard in Australia, Bangladesh, Belgium, Canada, Chile, India, Italy, Mexico, the Netherlands, Spain, the United Arab Emirates, and Vietnam.