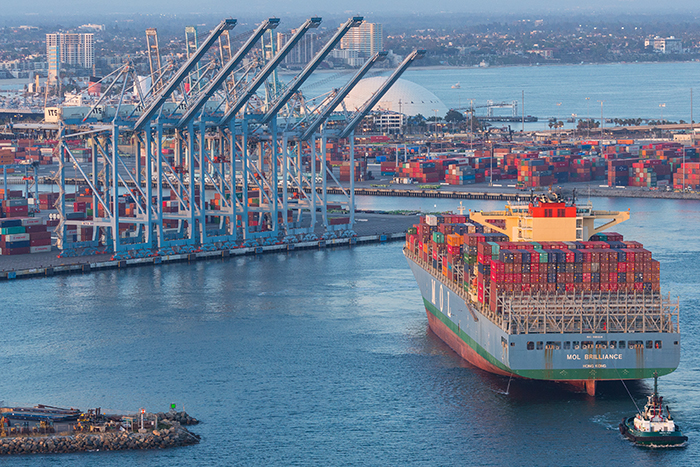 The share of non-alliance services operating between Asia and the US West Coast is now 29 percent, up from 19 percent prior to the pandemic. Photo credit: Port of Long Beach.

We are at a point where the coming peak season dynamics are very unpredictable.

On one hand, the Shanghai reopening in combination with an early peak season could lead to a worsening of the bottlenecks. And even worse if US West Coast ports experience a slowdown or a strike linked to the ongoing longshore contract negotiations. In that case, we would see a repeat of the 2021 supply chain problems and record-high spike in spot rates.

On the other hand, skyrocketing energy prices and inflation combined with a reversal of consumer spending patterns to once again favor services rather than physical goods could lead to an inventory overshoot and a drastic drop in demand, and hence freight rates.

While everyone would like clarity on which of these two scenarios we will end up seeing, the reality is that the market is basically teetering on an edge between the two and it will be a little while before it becomes clear which one it is.

However, irrespective of which scenario comes to pass, there will eventually come a time where the market settles down and we begin a reversal back to normality. Presently, more than 10 percent of the global vessel capacity is unavailable due to delays and congestion, but a reversal to normality will mean a re-release of this capacity back into the market. It is inevitable that this will lead to sharp downward pressure on freight rates as they begin a slide back toward what can at best be described as a “new normal.” For the head-haul trades, this new normal will be far lower than the present rates, but also markedly higher than the pre-pandemic normal.

But the transition back down will lead to some interesting market dynamics irrespective of whether this process starts now or only after the end of peak season 2022.

In early 2020, the carriers showed how well they were able to manage capacity in the face of a sharp decline in demand. In essence, they were able to prevent a rate collapse despite deep declines in volumes — very much unlike the situation that unfolded more than a decade earlier during the financial crisis. It should be noted that the subsequent rate increases were caused by the emergence of bottleneck constraints in the supply chain and not materially by blank sailings.

What should we expect of the rate decline back to normal that is ahead of us?

Just before the pandemic in Q4 2019, 19 percent of the regular Asia-US West Coast services were operated outside the scope of the alliances. In Q2 2020 at the worst of the pandemic impact, this declined to just 12 percent as non-alliance services were removed. In May 2022, the share of non-alliance services is now 29 percent. For Asia-US East Coast services, that has increased from 0 to 15 percent.

The dynamics from Asia to Europe are quite different. Prior to the pandemic, none of the regular service capacity was outside the scope of the alliances; in May 2022, it had only increased marginally to 3 percent.

This, in turn, means that the ability for the alliances to effectively manage the capacity in the face of a sudden demand decline has diminished somewhat over the past three years on the Pacific, especially to the US West Coast, but not markedly so to Europe.

We should therefore also expect two different dynamics to unfold as the market starts its descent toward more normal conditions — the precise timing of which depends on the two aforementioned scenarios. If we get a strong peak in 2022, the move to normality will unfold during 2023. But in the case of a stop in consumer spending, the process could in essence begin over the next few months, but could take some 12 to 18 months to complete.

On the Pacific, especially to the US West Coast, we should expect a faster decline in freight rates than on Asia-Europe simply because there are more non-alliance services for which the carriers in question would be highly motivated to keep the vessel full. This is particularly true of the many newly started carriers reliant on very expensive charter vessels. It is likely that the path toward normalization could involve a brief “undershoot” of the rate level as the eventual outcome would be a range of smaller carriers being pushed back out of the market.

It would be a different dominant dynamic on Asia-Europe. In this trade, the alliances still operate most of the capacity and blank sailings can work to slow, but not prevent, the decline in rate levels — but only if the alliance members are aligned in their approach towards capacity management in the face of demand shortfall. And while this was the case in early 2020, it is far from clear that this is the current situation. The carriers have chosen strategies that point in different directions, and when the Asia-Europe trade comes under pressure during the normalization period, it could well be the trigger point for a reshaping of the alliances.

How to Improve OTIF: 15 Tips for On Time and In Full Delivery
END_OF_DOCUMENT_TOKEN_TO_BE_REPLACED