NYSHEX’s ability to scale up hinges on industry evolution

NYSHEX’s ability to scale up hinges on industry evolution 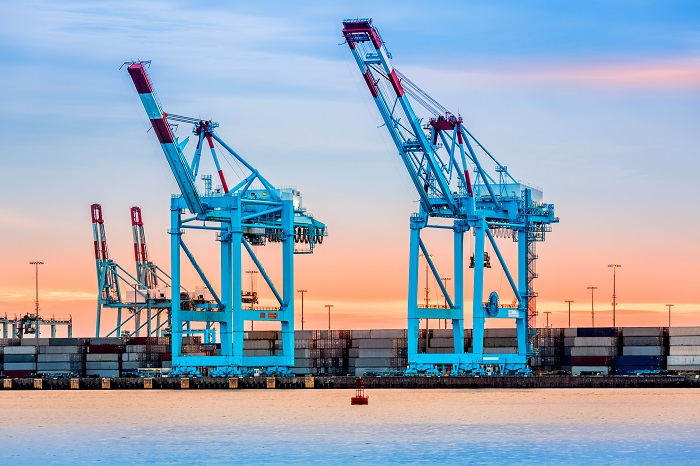 What’s still uncertain about NYSEHX is whether it will continue to provide virtually 100 percent contract reliability to a small segment of the market or be able to reach its goal of eventually serving 15 to 20 percent of the market. (Above: the Port of New York and New Jersey.) Photo credit: Shutterstock.com.

Since its July launch, the New York Shipping Exchange (NYSHEX) has shown that its tech-supported model is capable of fostering contract reliability between carriers and shippers; now comes the harder part. The platform’s ability to scale its modest volume hinges on the industry evolving so its allure expands to a broader base of beneficial cargo owners (BCOs).

NYSHEX has secured $16 million in funding from GE Ventures, Goldman Sachs, and others, and says it has attracted as regular users five carriers — CMA CGM, Hapag-Lloyd, Maersk Line, MOL, and OOCL —  and roughly 100 shippers. The exchange has won accolades for reducing no-shows, when a carrier fails to take booked cargo, or when a shipper does not deliver the freight, via contracts and penalties for when parties do not fulfill their commitments has won accolades from carriers and shippers alike. The exchange’s pilot launched in June 2016 and completed its first contract in August.

What is still uncertain is whether it will continue to provide virtually 100 percent contract reliability to a small segment of the market or be able to reach its goal of eventually serving 15 to 20 percent of the market. Volume booked via NYSHEX is building, according to the company, albeit at a growth rate paralleling the incline in demand of most new exchanges, particularly those trying to change a well-established way of working, CEO Gordon Downes told JOC.com. For example, the Intercontinental Exchange (ICE), like NYSHEX, attracted some of the largest players, though oil producers rather than carriers, but it took time to take off after its 2000 launch, he said. ICE had $5.8 billion in revenue last year.

In NYSHEX’s case of moving the industry, it is about encouraging carriers and shippers to move past a system driven by uncertainty: BCOs face no penalty for booking a certain volume of cargo on a ship, and then failing to send it; and carriers face few consequences for leaving containers on the dock that they have committed to move for a designated sailing. Container lines have attempted and failed to levy penalty fees from shippers that failed to deliver cargo as booked.

Last August, Hong Kong-based 300Cubits unveiled a different plan to induce carriers to avoid overbooking and shippers from no-showing. The company, started by former Maersk veteran and industry analyst Johnson Leung, released a cryptocurrency designed to underpin container bookings. The concept was simple: both the carrier and party booking a container slot commit a token to the transaction, and if either party fails to hold up their end, the other party gets both tokens. If the transaction occurs as planned, both parties keep their tokens.

NYSHEX is “trying to change an industry that has been doing contracting the same way since 1998 in the United States,” Downes said. “We know this and are prepared for a long runway [roughly two years] with the capital we have raised.”

Volume booked and delivered on the exchange was on average about 660 TEU per month in NYSHEX’s first five months, according to NYSHEX. The exchange handled 2,658 TEU in April, up from 644 TEU in March, Downes said. NYSHEX isn’t making its volume goals public, saying only that volumes are growing, and the key metric is that its “fulfillment rate is north of 99.8 percent.”

Such a guarantee, however, isn’t enough to spur them to book on the exchange, a half-dozen shippers told JOC.com. Their reasons vary, from balking at having to pay a penalty if they don’t deliver goods to finding the prices offered higher than what they can contract directly via a carrier. Two shippers said the requirement of having to pay in advance doesn’t work with their accounting arms while one major retailer told JOC.com that the insurance protection provided by the exchange falls short of their company’s requirements.

There is also reluctance among some big shippers because their volume already gives the leverage they need from the ocean carriers to get cargo loaded on ships as desired, while some have well developed partnerships that involve regular shipment forecasts. Also, some shippers want to use positive reinforcement with carriers rather than the negative approach of applying penalties.

At TPM 2018 in March, Mike Burns, vice president of global transportation and omnichannel logistics at Big Lots, likened it to his ability to get his flight changed last-minute because of his frequent flyer status with an airline. “I think NYSHEX has an interesting model for a certain part of the marketplace, for larger shippers with complex supply chains I’m not sure it’s the right model,” Burns said.

Downes said he’s aware of the various reasons for shippers’ reluctance to book with NYSHEX on the trans-Pacific, on which the exchange solely operates, but noted that trying to make the exchange work for everyone would undermine the model. He said the value of shipments transacted via NYSHEX will increase as the industry transforms to better address volatility and uncertainty, hurtful to both carriers and shippers; embraces digitalization; and the exchange’s technology and processes evolve.

Downes likened NYSHEX’s path to that of the adoption of cameras within smartphones. When first introduced, many questioned why they would need it because the pixilation didn’t compare well with point-and-shoot cameras. But as technology improved not just in the camera smartphones but the ecosystem where digital photos could be used – such as blogs, social media, etc. — the draw of cameras in smartphones increased, and is now commonplace.

NYSHEX is not just waiting for the industry to evolve. In contrast with the “sticks,” in the form of a penalty fee for a carriers and shippers if they don’t hold up their end of the contract, NYSHEX is exploring “carrots,” or positive incentives, such as reducing or eliminating the penalties for BCOs that demonstrate reliability . “Our business model and technology is constantly improving and evolving. We’re confident that soon NYSHEX will become relevant to a many more shippers,” Downes said.