No plans by cash-strapped carriers to ease zero-carbon goals

No plans by cash-strapped carriers to ease zero-carbon goals 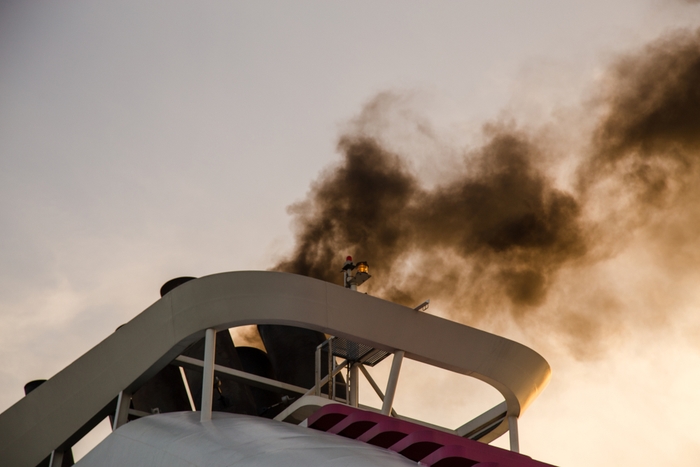 Faced with growing financial pressure, carriers are desperate to ease operating costs, and with bunker fuel prices falling rapidly over the past month, the longer southern route around the southern tip of Africa is once again an option. Photo credit: Shutterstock.com.

Two of the world’s top container carriers are rejecting suggestions that industry commitments to decarbonize shipping may lose priority in the struggle to rebuild balance sheets devastated by the demand-crushing global measures to combat the coronavirus disease 2019 (COVID-19).

“The global COVID-19 situation will not change our overall commitments in reducing CO2 [carbon dioxide] levels materially by 2030 and becoming carbon neutral by 2050,” was the brief response from a spokesperson for Maersk Line. The Danish carrier in February secured a $5 billion revolving credit facility linked to sustainability projects to help achieve the zero-carbon goal.

CMA CGM was equally firm about meeting its emissions reduction targets. “The CMA CGM Group remains strongly committed to environmental protection and to the energy transition of the shipping industry,” a spokesperson told JOC.com. He pointed to the initiatives being taken by the carrier in developing liquefied natural gas as a marine fuel, the trial of marine biofuel, and the testing of hydrogen. “The CMA CGM Group is well on track to achieve the 30 percent CO2 emissions reduction goal it has set itself by 2025,” the spokesperson said.

Hapag-Lloyd CEO Rolf Habben Jansen said in the carrier’s recently released sustainability report that in 2019 the shipping line had reduced CO2 emissions and strengthened its social commitment. “This year, as well – despite the adverse effects of the COVID-19 crisis – we will continue to focus on additional improvements, including technological and digital innovations as well as further reductions in the emissions of our fleet," he said.

But the commercial realities of operating large vessel fleets in the current low-demand environment appear to already be testing the environmental resolve of carriers, considering the renewed interest in using the longer — and with the current low price of fuel oil, cheaper — route around southern Africa.

Demand has all but been erased by the closure of all non-essential businesses and manufacturing across the United States and Europe, creating a cash flow crisis that has the carriers losing $600-$800 million a week, according to Sea-Intelligence Maritime Consulting.

In response, the container shipping alliances are making extensive capacity withdrawals that will last through June, removing up to 20 percent of capacity from the trans-Pacific, and 30 percent from Asia-Europe trades. In its latest Sunday Spotlight, Sea-Intelligence said 435 sailings have now been canceled on the deep-sea trades, which indicates a demand decline of 7 million TEU in 2020.

Faced with growing financial pressure, carriers are desperate to ease the operating costs of the vessels that are required to sail, and with bunker fuel prices falling rapidly over the past month, carriers are again looking at the longer southern route around the southern tip of Africa for ships on the backhaul return from Northern Europe to Asia.

The typical Suez Canal baseline toll for a laden 20,000 TEU container ship, excluding actual and potential rebates, was about $700,000, currently worth the equivalent of some 3,500 tons of high-sulfur fuel oil, Alphaliner noted in a recent newsletter.

Because the route around the Cape of Good Hope will add more than 3,000 nautical miles to the journey, ships will burn fuel for longer, and to slot in with weekly schedules, the vessels will also need to increase speed, further adding to emissions. Alphaliner said for a modern mega-ship, five extra days of steaming and an increase in speed from 15 to 17 knots would add up to less than 1,000 tons of additional bunker fuel that at current price level would be approximately a third of the Suez Canal fee.

“Provided that shipping lines can ‘get away’ with the extended transit time, the savings make a clear case for the detour,” Alphaliner wrote.

So far, only CMA CGM has taken this option, said Alan Murphy, CEO of Sea-Intelligence. Murphy said the CMA CGM Alexander von Humboldt was re-routed on the FAL-1 backhaul around Africa, but the carrier was planning to divert three headhaul vessels via Africa on the FAL-3 Asia-Europe service.

Maersk and MSC have so far not announced plans to bypass the Suez Canal, but the carriers have said they will extend sailing time on some Asia-North Europe services by seven days.

Murphy said the extended backhaul sailing time gives the carriers the option of sailing around Africa without impacting schedules, allows them to use up surplus capacity, and cuts costs.

“If bypassing Suez can reduce the cash flow hemorrhage, this would be of highest priority to safeguard financial survival,” Murphy said. “A clear side effect is an increase in not just transit times, but also emissions. Whilst the environment has moved very high up the agenda for the carriers in recent years, this is another example that for the time being, the choice between short-term financial survival and a long-term reduction of emissions is not really a choice at all.”

The argument could also be made that any sailings via Africa will be a short-term measure that will end as soon as the bunker price starts to increase, and with so many blank sailings resulting in far fewer ships currently on the water, when measured against total annual emissions, the longer sailings of a few vessels would be of no real consequence.

But it does underscore a larger concern that financial pressures on carriers could outweigh environmental considerations and slow a commitment from the shipping industry towards meeting its greenhouse gas (GHG) emissions reduction goals.

That point was made by a group of non-governmental organizations (NGOs) — the Clean Shipping Coalition, Greenpeace International, Pacific Environment, and the World Wildlife Fund. In a letter sent in early April to the International Maritime Organization (IMO), the NGOs said the IMO decision to postpone its Marine Environment Protection Committee (MEPC) meeting in March because of the coronavirus should not delay the phasing out of GHG emissions from international shipping.

Maritime transport emits about 940 million tons of CO2 annually and is responsible for about 2.5 percent of GHG emissions. In 2018, the IMO adopted a resolution that set two goals for GHG reductions from shipping. The first is a 40 percent increase in overall fleet efficiency by 2030, and the second goal is a 50 percent reduction in absolute emissions by 2050 using a 2008 baseline, with emissions to be reduced to zero or near zero as soon as possible after 2050. This for the first time brought the shipping industry broadly into line with the goals of the UN’s Paris Agreement to combat climate change.

With shipping one of the world’s leading polluters, the NGOs stated in their letter that the IMO goal of achieving substantial CO2 reduction by international shipping even before 2023 should remain unchanged.

“Tackling shipping’s impact on the climate is the biggest challenge facing the sector today,” the letter noted. “In these uncertain times, we expect the IMO will continue to act on its responsibility to lead the industry in terms of climate ambition and accountability.”

The NGOs called for the IMO to quickly set up an online working group, and to consider holding an online MEPC meeting to avoid pushing back its decarbonization timeline.

An IMO spokesperson told JOC.com that it had received the letter and the IMO secretariat was looking into ways to conduct the MEPC meeting virtually.

“An extraordinary session of the council (comprising 40 member states) has just been held by correspondence and we will be looking into how and when meetings can be held, as the situation develops,” the spokesperson said.

One region that has clearly stated there will be no relaxing of emissions targets is Europe. Instead, as part of its “Green Deal” environmental strategy that was approved in January and became part of a wider European Climate Law in March, the European Commission on March 31 launched a 12-week public consultation on plans to increase the GHG targets. The plans will propose to increase the EU’s current 2030 target of at least 40 percent GHG emission reductions compared with 1990 emission levels to at least 50 percent, with a 55 percent reduction the goal.

The new climate policy to make the EU a net-zero carbon economy by 2050 includes a proposal to bring shipping into the emissions trading system (ETS), a move strongly opposed by the shipping industry.