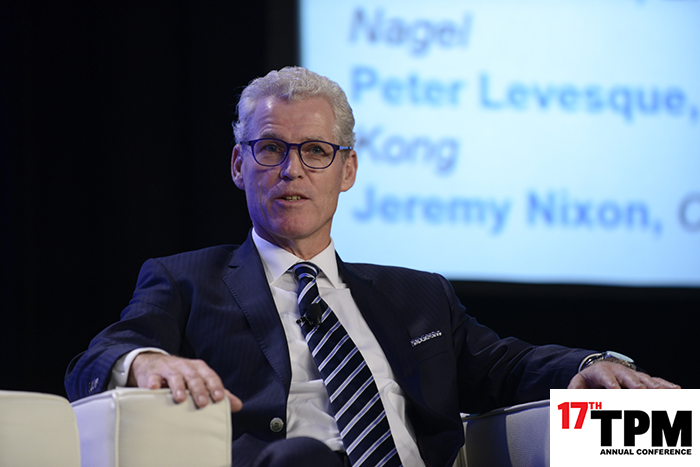 Jeremy Nixon is the head of ONE.

Jeremy Nixon, the head of container shipping at Nippon Yusen Kabushiki Kaisha, has been appointed CEO of Ocean Network Express (ONE), the joint venture company that brings together the liner shipping divisions of NYK, Kawasaki Kisen Kaisha ("K"Line), and Mitsui O.S.K. Lines.

Nixon quit his NYK position to take up the new post that is effective from immediately and he will be based in ONE’s operational headquarters in Singapore.

The decision to appoint Nixon as CEO was expected as NYK is the senior partner in the new line, at least from a shareholding perspective, with a 38 percent stake in the joint venture company. MOL and "K" Line will have 31 percent each.

Nixon has also been maintaining a high international profile. At the JOC’s TPM conference in Long Beach in March, Nixon explained how the new carrier would begin its operations. “Around February 2018, we will start moving across to the new system, begin taking bookings, and start loading on to the new ships. The whole idea is to do it in a smooth and disciplined way to avoid any disruptions to our customers,” he said.

The three Japanese carriers officially established the world’s sixth-largest liner shipping company on July 7 in a joint venture that will start operating in April 2018. ONE has the world’s sixth-largest fleet, with 250 ships and a capacity of 1.38 million TEU, and the joint venture integrates the three companies' container shipping businesses, including their terminal operations outside Japan.

The carriers had planned to set up the joint venture by July 1, but were delayed by regulatory setbacks. However, on July 3 the lines said in a statement that they had received all the approvals necessary to comply with local competition laws in regions where compliance was required. The only country to reject the liner shipping merger proposal was South Africa, but the carriers plan to appeal the ruling.

The US Federal Maritime Commission voted down the carriers’ proposed “tripartite agreement,” saying the Shipping Act of 1984 did not provide them authority to review and approve mergers, but the ONE carriers expect to secure permission to operate in the United States by the time the new company starts operations in April next year.

ONE will have a strong balance sheet, starting off with $3 billion in assets – $1.5 billion in cash and $1.5 billion in ships and terminals. “We will start off from a very clean point with the focus on customer delivery,” Nixon said at the TPM conference. “We will also have quite a few terminals in our network with nine in North America that will be built into an integral part of the service product so we can control the end-to-end service.”

Merging their container shipping divisions will generate the scale and cost benefits that are essential to be competitive against the industry giants such as Maersk, MSC, CMA CGM, and a new Cosco-Orient Overseas Container Line (OOCL) carrier. In October 2016, when the merger was first announced, "K" Line said: “Since last year in the liner container ship industry, the movement to increase competitiveness by expanding operational scale through merger and acquisition has been actualised, and the business model itself has been drastically changed.

“Now, the three Japanese shipping companies have come to share the same thought, recognising that in order for us to keep up and compete with these overseas carriers, which will be developing larger-scale operations from now on, what we need is not only to properly grasp market needs and then offer high-quality services, but also to enlarge the business scale.”

An improving container shipping market is lifting the profitability of carriers as rates and volume increase. Cosco Shipping has just announced that it expects to make a first-half profit of $272 million and the ONE lines have forecast a profitable turnaround in their 2017/18 financial year that ends just as their April joint venture begins.

“We expect the Asia-North America cargo volumes to continue to be firm on the back of the strong US economy. On Asia-Europe routes, we also expect cargo volumes from Asia to be firm as well based on current demand levels,” MOL said in its outlook.