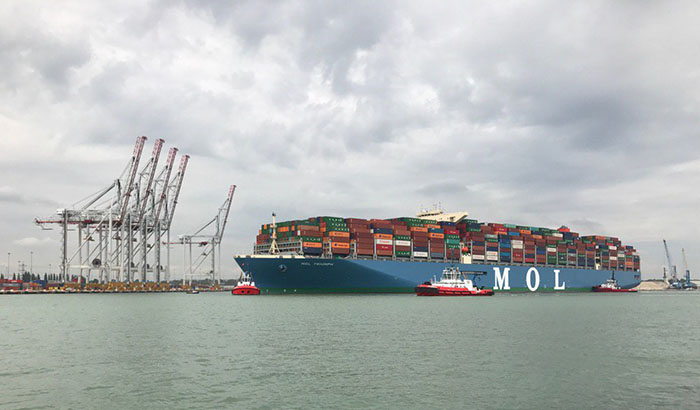 The container divisions of Japan's three liner shipping companies will be known as Ocean Network Express.

Ocean Network Express (ONE) will be the name of the new liner shipping company that is a merger of the container shipping divisions of the three major Japanese carriers, and its regional headquarters will be set up in Singapore.

“K” Line, MOL, and NYK Line announced the name of their new joint venture Wednesday and said it remains on schedule to begin operations in April 2018. The joint venture company was expected to be formed on July 1, but the carriers said the establishment of the new entity would only be announced once all antitrust reviews had been completed.

This process may take longer than expected. On May 2 the US Federal Maritime Commission (FMC) voted down the carriers’ proposed “tripartite agreement”, saying the Shipping Act of 1984 did not provide them authority to review and approve mergers.

In Wednesday’s joint statement, the carriers said ONE would better meet customers’ needs “by providing high-quality, competitive services through the consolidation and enhancement of the three companies’ global network and service structures.”

The carriers will set up a holding company in Japan, and an operating company and regional headquarters in Singapore.

Despite the FMC’s rejection on jurisdictional limitations, the merger is not expected to be blocked on market concentration grounds as the combined carrier will control just 7.2 percent of global capacity, which is lower than that currently held by each of the top five lines. The three carriers in total handled nearly one-fifth of US imports in 2016, but that total share fell to 13 percent in the first quarter, according to PIERS, a sister product of JOC.com.

Container shipping analyst Alphaliner said the FMC decision should require a change of plan by ONE, as they would not be allowed to operate as a merged entity during the nine-month interim period prior to the actual merger of the business. US laws forbid the sharing of competitively sensitive information or the premature combining of parties prior to an actual merger.

In view of this, the analyst said the Japanese carriers may now need to push forward the commencement date of their merged business to coincide with the formation of the new joint venture on July 1.

Data from PIERS shows that in the first quarter of 2017, the combined US imports carried by the three lines reached 666,043 TEU, which represented a 12.79 share of the market. Mediterranean Shipping Co. (MSC) was the top carrier serving the US trades, with a share of 12.48 percent, followed by Maersk Line with a 9.68 percent share.

The three Japanese lines transported 85,000 TEU more than they carried in the first quarter of 2016, but it was not only the Japanese carriers that were buoyed by rising demand for US containerized imports. Thirteen of the top 14 container lines recorded a first-quarter increase in TEU numbers over the same period in 2016, with only CMA CGM down slightly, according to PIERS data.

Total US containerized imports in 2016 hit 21.5 million TEU, and a closer look at the data reveals a similar picture as the first quarter, with J3 leading the market. The carriers’ combined volume was almost 2.6 million TEU, or 20.95 percent of the market. MSC was again first with 19.96 percent, followed by Maersk at 15.74 percent.