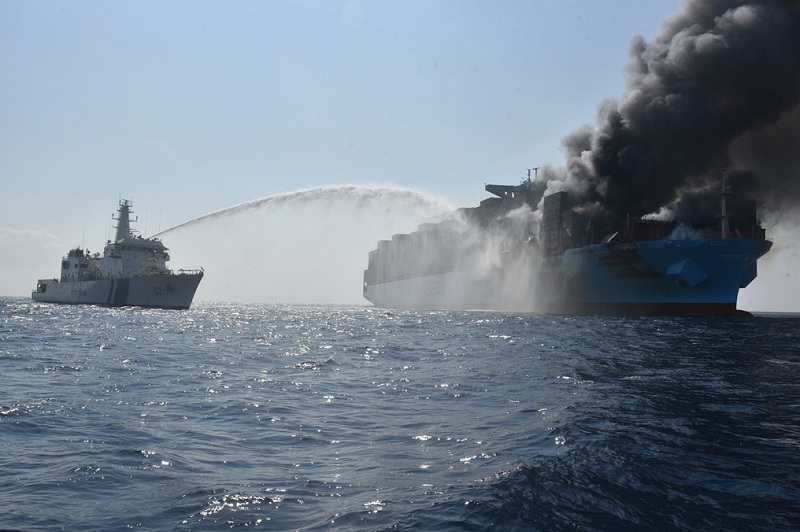 Maersk Line is making alternative vessels available for European exporters scheduled to load containers on the Maersk Honam, which caught fire off the port of Salalah in the Arabian Sea on March 6.

The fire continues to blaze a week after it began in one of the cargo holds and quickly escalated, forcing the crew to abandon the vessel. The remains of three crew have been found and one man is still missing. One of the evacuated crew died soon after being rescued.

A Maersk spokesperson said Maersk Honam was scheduled to arrive in Europe one or two weeks after the fire and the carrier had time to put a contingency plan in place to mitigate further disruption.

“For customers who intended to load cargo on Maersk Honam in Europe to be exported to Asia, Maersk Line will be considering an alternative vessel to take over Maersk Honam’s rotation or make other allowances on other Maersk Line vessels sailing to Asia,” the spokesperson said.

Several Maersk Line vessels assisted in the search and rescue for the missing crew members, but the carrier did not expect schedule disruption as a result. “To mitigate further impact to schedules of the vessels assisting with the search and rescue, Maersk Line vessels traversing the region are rotated periodically, so that one vessel is not excessively delayed,” the spokesperson said.

The Maersk spokesperson declined to speculate on the cause of the fire, but a carrier executive told JOC.com at TPM 2018 in Long Beach that with the mis-declaration of dangerous goods being such an enormous industry problem — on ocean as well as air — that would be an obvious place for investigators to start.

“What we can say is this is a very serious fire,” Maersk said. “A full investigation will be conducted to determine the cause of the fire and the impact to the vessel and cargo.” The India Marine Police is conducting a routine investigation of the incident and will be interviewing all crew members.

Specialized firefighting vessels are still on the scene and salvage operations are being led by Smit Salvage and Ardent. Maersk Line is cooperating with the salvors and has two marine engineers on site.