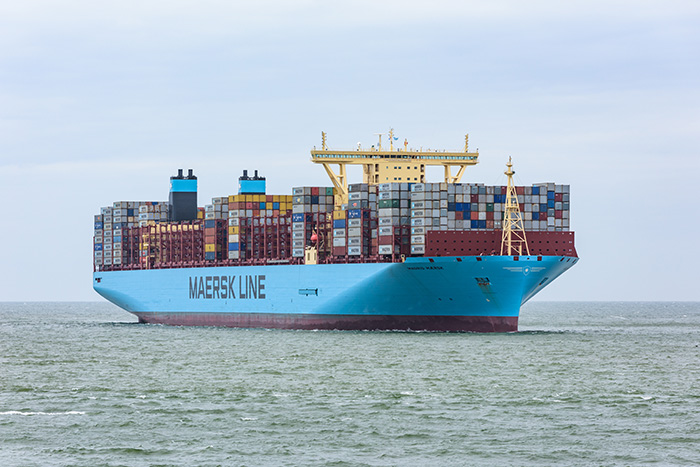 Maersk Line delivered a profit of $338 million for the second quarter.

Maersk Line has warned that the financial impact of the late-June cyber attack on Maersk Line could reach $300 million, but such is the strength of the market that the carrier has maintained its expectations of a $1 billion improvement in full-year profit over the loss recorded in 2016.

The carrier has left the expectation unchanged because of improvements in freight rates and increasing volumes, with global demand for seaborne container transportation expected to increase by close to 4 percent in 2017. A 4 percent growth in demand in the second quarter drove Maersk Line to a profit of $339 million as nominal supply grew just 1.4 percent. The container shipping industry as a whole is likely to turn a profit of $5 billion this year as a result of higher rates and volume, which is growing at the fastest rate in six years, according to maritime analyst Drewry.

Maersk was forced to defensively shut down all its IT and communications following the June 27 NotPetya malware attack, impacting container-related businesses Maersk Line, APM Terminals, and Damco. Joint Maersk Group and Maersk Line CEO Soren Skou estimated that the attack had lost the company 70,000 FEU over two weeks in July as the carrier struggled to operate with no communications. He said the financial impact would be between $200 million and $300 million, but this would be felt mainly in the third quarter, stemming from lost volumes during the incident as well as extraordinary costs in IT and operations.

A look at the freight rate per 40-foot container tells the story of Maersk Line’s improving financials. The average rate rose 21 percent between April and June to $2,086 per FEU, and while total volume during those three months was only up by 1.6 percent, 2.7 million containers benefited from the higher rate levels. However, total unit cost were negatively impacted by a 61 percent increase in the bunker price.

Skou said all trades were profitable in the second quarter and although volume grew at below 2 percent, the focus of the carrier was on improving profitability rather than growing market share that dominated previous quarters.

He added that when Hamburg Sud is added to the group in the fourth quarter as planned, it will see the carrier come out of 2017 with a significant increase in market share. So far 12 jurisdictions have given regulatory approval for the takeover, although China's approval is still outstanding.

Maersk Line took delivery of two out of 11 second generation Triple-E’s ordered in 2015 and recycled four vessels. By the end of June, Maersk Line had 25 vessels in its order book totalling 347,000 TEU for delivery in 2017 and 2018 consisting of nine 20,600 TEU second generation Triple-E, nine 15,200 TEU vessels and seven 3,600 TEU ice-class vessels for the intra-European market.

The carrier’s total order book corresponds to 9.9 percent of current fleet compared with an industry order book of around 13.1 percent, according to Alphaliner.

Skou said the global container fleet capacity stood at 20.6 million TEU at the end of the second quarter, an increase of 1.4 percent compared with the same quarter last year. However, adjusting for the decline in the idle fleet from 4.6 percent to 2.6 percent of global nominal capacity, the offered capacity grew in line with container demand growth at around 4 percent.

Container demand continued to outgrow the global container fleet in the second quarter, contributing to the improved market as freight rates out of China increased by 31 percent compared with the second quarter of 2016, according to the China Composite Freight Index (CCFI).

A total of 332,000 TEU (40 vessels) were delivered and 86,000 TEU (36 vessels) were scrapped between April and June. The modest number of scrapped vessels followed high scrapping rates in the preceding quarters. No new vessels above 10,000 TEU were ordered.

Maersk Group reported a loss of $264 million as it was negatively impacted by post-tax impairments of $732 million primarily relating to lower asset valuations in Maersk Tankers and a few commercially challenged terminals in APM Terminals. Group revenue increased by $743 million to $9.6 billion with liner revenue up $1 billion, an increase of 21 percent.