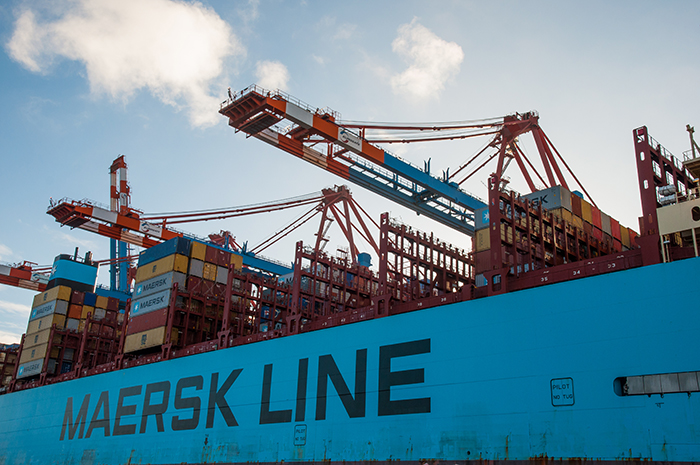 Maersk Line made a $541 million profit in 2017. Photo credit: Shutterstock.

Higher rates and rising container volumes lifted Maersk Line to a $541 million profit in 2017, but the impact of a mid-year cyber attack, rising fuel prices, and industry overcapacity saw the carrier falling short of its $1 billion profit improvement target.

The container shipping unit of Maersk Group reported an 11.7 percent year-on-year increase in the average freight rate, and a 3 percent rise in volume to 10.7 million TEU drove revenue up by 15 percent to $23.8 billion. However, the cyber attack cost the carrier $250 to $300 million in the third quarter and rates fell through the second half while bunker fuel prices rose.

“We were not able to deliver on the guidance of a $1 billion improvement in our 2016 profits, mainly because of the cyber attack,” Maersk Group CEO Søren Skou said. “There were strong underlying market conditions through most of the year, but the result was negatively affected by the cyber attack, weaker rates, and increasing bunker costs, especially in the fourth quarter.”

Volume on Maersk Line’s east–west services grew by 2.4 percent to 3.77 million FEU, on north–south by 2.2 percent (5.21 million TEU), and by 7.3 percent on the carrier’s intra-regional operations (1.73 million TEU), reflecting strong demand with an estimated market growth of about 5 percent compared with 2016.

Vincent Clerc, chief commercial officer of Maersk Line, said the volume recovery was encouraging and suggested there was no long-term affect of the cyber attack.

The increase in freight rates was a result of record lows in 2016, and the rates peaked in the second quarter of 2017 before beginning a fall that lasted until the end of the year. While Maersk Line reported average freight rates of $2,005 per FEU across its global operations that were almost 12 percent higher than those achieved in 2016, the average unit cost of transporting each container also rose, coming in at $2,079, or 5 percent above that of 2016. Rates for 2017 were well below the average per-40-foot container achieved in 2013 and 2014 when it surged past $2,600 per FEU.

The latest reading of the Shanghai Shipping Exchange’s Shanghai Containerized Freight Index shows that Asia–Europe spot market rates remained flat this week, rising by just $2 to $914 per TEU and falling slightly on Asia–Mediterranean routes to $791 per TEU. Trans-Pacific rates declined this week, with Asia–US West Coast falling by $66 to $1,486 per FEU and Asia–US East Coast sliding by $68 to $2,775 per FEU. The weekly rate movements are tracked at JOC.com’s Market Data Hub.

Maersk Group as a whole reported an underlying profit of $356 million on revenue of $30.9 billion derived mainly from its transport and logistics operations. The group is divesting itself of its energy-related businesses, but if the financial performance of these discontinued operations is included, the group made a loss of $1.16 billion in 2017.

The acquisition of Hamburg Süd and divestment of Mercosul Line were completed in December 2017, with the German carrier contributing $458 million in revenue in the last month of the year at an underlying loss of $8 million. Together, the two carriers have about 19 percent global capacity market share and more than 4 million TEU in container capacity. Hamburg Süd will remain an independent brand, with only operational aspects merging with Maersk Line.

Cost synergies from the merger are expected to be between $350 and $400 million by 2019, primarily from integrating and optimising the networks, as well as standardized procurement. “After a successful acquisition of Hamburg Süd, the integration is off to a good start, with both carriers growing volumes during the first months. A smooth integration of Hamburg Süd remains a top priority for 2018,” Skou said.

Maersk Line said in its earnings statement that, supported by strong demand growth, earnings in the container liner industry strengthened in 2017 compared with a weak 2016. However, the carrier highlighted the surplus capacity that is in the market that was challenging the fundamentals.

“The current wave of mergers in the industry, which started with the merger of Hapag-Lloyd and CSAV in 2014, has increased the top five market share in the industry from 45 percent in 2014 to 64 percent, once the Cosco-OOCL deal and Japanese joint venture [Ocean Network Express] have been implemented in [first quarter] 2018,” the carrier said.