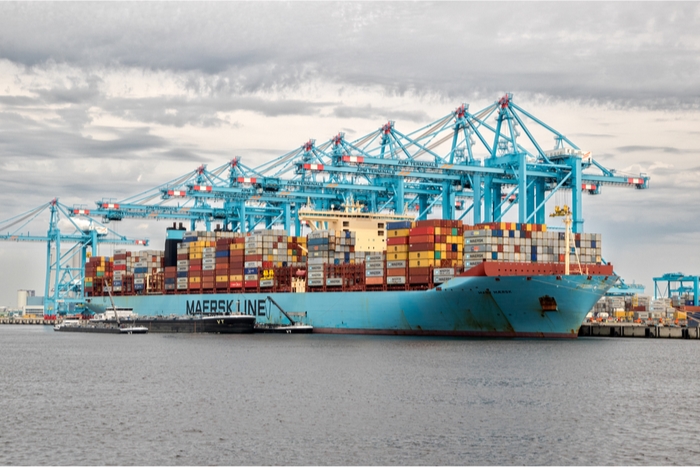 It will be a difficult second quarter for the world's largest container shipping company, with volume in April down sharply. Photo credit: Shutterstock.com.

Maersk Line will cancel up to 140 sailings in the second quarter on the east-west trades as the carrier attempts to match its capacity with a predicted 20 to 25 percent decline in volume.

It was a strategy that was successfully deployed in the first three months of the year as the coronavirus disease 2019 (COVID-19) began to crush demand. The 90 sailings that were blanked as demand fell and the higher freight rates compensated for an increase in the price of low-sulfur fuel and allowed the carrier to report a profitable start to the year.

But A.P. Møller-Maersk CEO Søren Skou warned during the carrier’s first quarter results announcement Wednesday that the second quarter would be heavily affected. Although visibility through the remainder of the second quarter and beyond remained “extraordinarily low” as a result of the COVID-19 pandemic, he said the carrier could already see volume has fallen by 20 percent in April and into the first two weeks of May.

“As global demand continues to be significantly affected, we expect volumes in Q2 to decrease across all businesses, and it is our aim to pair the drop in demand one-to-one with reduced capacity in our network,” he told analysts on an earnings call Wednesday.

The bleak second quarter outlook by the world’s largest container carrier was in stark contrast to a first quarter performance that saw A.P. Møller-Maersk improving profitability, growing earnings before interest, taxes, and depreciation (EBITDA) by 23 percent to $1.5 billion. That allowed the group to post a net profit of $197 million compared with a $69 million loss in the first quarter of 2019. This was achieved despite a marginal 0.3 percent increase in group revenue to $9.6bn in the first quarter.

“The strong results were made during a quarter with sharp fuel costs increases derived from the industry’s switch to low-sulfur fuel and on the backdrop of a contraction in global trade due to lockdowns in most regions,” Skou said.

The ocean segment led the improvement in profitability with Maersk Line first quarter revenue increasing 3.1 percent year over year to $7.2 billion, even with a 3.2 percent decline in volume to 3 million TEU. Freight rate increases offset increasing fuel prices, and the average rate across all trades increased by 5.7 percent to $1,999 per FEU, with rates on the east-west routes up 7.5 percent, and on the north-south trades by 7.8 percent year over year.

Data from Sea-Intelligence Maritime Consulting shows the incredible number of blank sailings that have been made across the three container shipping alliances.

The 2M Alliance of Maersk Line and Mediterranean Shipping Co. has blanked 27 sailings on Asia-North Europe, withdrawing 511,940 TEU, while cutting 233,479 TEU from Asia-Med in 16 blank sailings. On Asia-US trades, 45 sailings have been blanked, withdrawing 369,432 TEU.

Maersk’s total bunker costs increased 22 percent in the first quarter as the switch to IMO 2020-compliant low-sulfur fuel pushed average bunker prices up 32 percent. But the costs were offset by bunker consumption declining 7.5 percent as a result of the extensive blank sailings and unit costs per container falling 2.3 percent.

“Maersk’s ocean business therefore appears to have successfully weathered the storms of Q1 and [is well positioned] for the hurricane the industry is currently in the midst of,” Jensen said in a LinkedIn post. “The severity of this can be seen in Maersk's expectation of a 20 to 25 percent volume decline in Q2.”

Jensen also pointed out that first quarter volume was mainly impacted by the coronavirus outbreak in China, while the effects of the global pandemic will be seen in the second quarter.

But Skou said the uncertain outlook extends past the second quarter. “The visibility is very low and one of the reasons we are not offering guidance for the full year is that it is unclear to us, and our customers, how their inventories will develop,” he said. “A lot of the goods that have been shipped and not sold in the spring will not be able to be sold in the summer.”

Revenue from the group’s terminal operations in the first quarter declined 11.5 percent to $740 million as volume fell 1.6 percent to 2.8 million TEU. Maersk said operational plans were being revisited to enable cost reductions during the second and third quarters when volume is expected to be “significantly lower” than in the first three months.

The logistics and services segment saw revenue decline by 5.1 percent to $1.4 billion, mainly due to lower revenue in intermodal and sea freight forwarding, although gross profit increased by 8.9 percent supported by intermodal, and warehousing and distribution business.

To mitigate the impact of falling demand on the carrier’s cash flow, Maersk is limiting group capital expenditure through 2020 but has maintained its Capex guidance for 2020 and 2021 at $3 billion to $4 billion. Most of the Capex will be transferred to 2021.