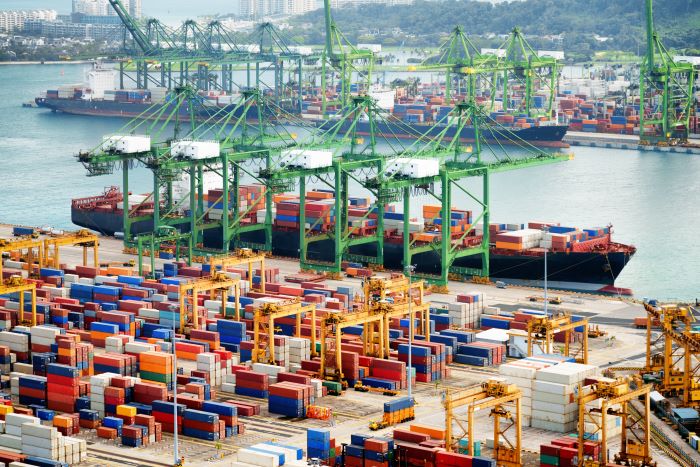 The price of very low-sulfur fuel oil has fallen by $170 per metric ton (23 percent) in just the past three weeks at the bunkering hub of Singapore (above). Photo credit: Shutterstock.com.

The market for very low-sulfur fuel oil (VLSFO) is in the midst of a sharp correction driven largely by the easing of logistical woes that marked the days leading up to the IMO 2020 mandate and its immediate aftermath, analysts say.

While the chaos that could have erupted on Jan. 1 didn’t materialize, VLSFO prices jumped sharply in the first week of IMO 2020, only to collapse over the past three weeks. The Oil Price Information Service (OPIS), a sister company of JOC.com within IHS Markit, assessed the price of VLSFO in Singapore on Jan. 8 at $740 per metric ton. On Thursday, OPIS assessed that market at $570/mt, a 23 percent drop in just 16 trading days.

“This was a truly transitional issue related to logistics more than anything else,” Hédi Grati, director of refining and marketing at IHS Markit, told JOC.com. “What we have seen recently is a correction to VLSFO values — relative to crude oil and relative to diesel — that are more in line where we expected them in the first place.”

Under new regulations from the International Maritime Organization, ships must burn fuel with a sulfur content of not more than 0.5 percent, down from the prior cap of 3.5 percent. Vessels can still burn high-sulfur fuel oil (HSFO) if they install costly emissions-cleaning scrubbers.

Adrian Tolson, a bunker market veteran and director at consultancy BLUE Insight, agreed the early run-up in VLSFO prices was linked to a supply chain finding its way amid a significant shift in market dynamics.

“You can say a lot of it was driven by ... logistics issues. Everyone was shifting barges, tanks,” Tolson told JOC.com. “Everybody kind of left ordering VLSFO until the last minute, and that just put a lot of pressure on the supply chain, on the suppliers.”

The dramatic decline in prices since then comes as buyers are tapping into the initial supply of global VLSFO, which Tolson said appears sufficient, for now. “Generally speaking, there seems to be a pretty good supply of low-sulfur [fuel] around, and that’s reflected in the prices,” he said.

The plummeting VLSFO values have resulted in an equally impressive narrowing of the closely watched spread between low-sulfur and high-sulfur fuels. Since earlier this month, the spread has narrowed by approximately 34 percent at major bunkering hubs — from $359/mt to $235/mt in Singapore, from $273/mt to $184/mt in Rotterdam, and from $280/mt to $185/mt in New York, according to OPIS data.

However, shipowner association BIMCO was quick to point out that the drop in price is hardly a reprieve for the industry from the higher operating costs associated with the IMO 2020 mandate.

“Even given the recent narrowing of the spread, shipping companies are still faced with a massive uptick in fuel oil costs, which is set to affect operating margins in the upcoming quarters, as many companies have little leeway to pass on the additional costs to their customers,” BIMCO said in a statement Jan. 23. “Despite the lower spread, the investment payback period for a scrubber is between half a year to one-and-a-half years, depending on the cost of the scrubber and daily consumption, which allows for substantial fuel oil cost savings for scrubber-fitted ships.”

Despite the seemingly rapid peak and quick retreat in VLSFO prices, neither Grati nor Tolson believe the pre-Jan.1 concerns over IMO 2020 were overblown.

“There have been a significant number of quality incidents, but only few shipping companies dare to admit it,” Grati said. “Whether or not this is changing minds about how desirable VLSFO is remains a question mark until we see actual statistics.”

Tolson said IMO 2020 has “fundamentally changed the oil market, what refineries process, what crude is in demand,” but noted that the market hasn’t seen the “disastrous or catastrophic events that people said could happen. Someone at IMO would [knock on wood] and say it was a success.”

Will China flood the market?

The VLSFO market has room to fall further in the short term due to what Grati referred to as the “giant wildcard” of recent tax liberalization in China. The Chinese government earlier this month approved a tax waiver for exports of VLSFO, according to Reuters, a move that will encourage domestic refiners to increase production of the fuel.

Chinese fuel exporters have been shackled by onerous tax policies, allowing bunkering hubs in Singapore and South Korea to effectively corner the market on regional sales. Grati said there’s been some talk the tax relief will result in as much as 24 million tonnes of VLSFO flooding the market.

“Some price discovery agencies have hinted that this piece of news has contributed to VLSFO prices cooling down, but I do not have the evidence to confirm this,” he said. “Our view on this is that Chinese VLSFO will enter the market, but not by that amount, more towards levels of being self-sufficient, [approximately] 10 million tonnes.”

Although the VLSFO market is softening now, another test will come in the spring when the ample supplies of the fuel that had been built up ahead of IMO 2020 begin to diminish.

“Current market stability is covered under a carpet of storage that was accumulated back in 2019, and that will likely be depleted in early spring,” Grati said. “It remains to be seen how the market will react to this, and how supply-demand balances will be perceived by then.”

Tolson said the VLSFO supply chain, while stable, “hasn’t resolved itself perfectly.” “As you move beyond the initial supply of VLSFO, you might see some tightness in inventory,” he said.