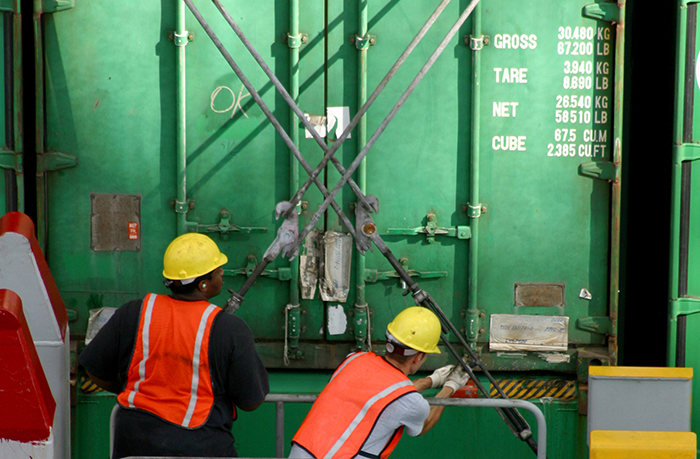 A guarantee of labor peace on the US West Coast could reverse declines in US import market share at ports there.

A summer vote by the membership of the International Longshore and Warehouse Union (ILWU) to extend the current waterfront contract would signal to beneficial cargo owners (BCOs) that they could plan their supply chains without US West Coast disruption for at least the next five years, the president of the Pacific Maritime Association (PMA) said Monday.

“This sends a positive message for stability on the West Coast,” said PMA president James McKenna. He said the PMA has already been receiving positive feedback from BCOs since the ILWU announced on Friday that its caucus in San Francisco voted to forward the details of the PMA’s formal proposal for a contract extension to the rank and file for their approval. The current West Coast contract is set to expire on July 1, 2019.

A positive vote by the ILWU to extend the contract to July 1, 2022 would also pressure the International Longshoremen’s Association (ILA) and the United States Maritime Alliance (USMX) on the East and Gulf coasts to take action on extending their current contract or negotiating a new one in order to prevent a possible loss of cargo, and worker man-hours, to West Coast ports. The current ILA contract expires Sept. 30, 2018.

Port competitiveness is becoming an increasingly important focus not only for BCOs, but also for the two longshore unions that represent dockworkers on either coast. West Coast ports are experiencing a steady loss of market share of US imports from Asia. West Coast ports in 2016 held a 67 percent share, which was down from 78.3 percent in 2005. The East Coast’s share increased to 30 percent from 20.5 percent in 2005, and the Gulf Coast’s share increased to 2.85 percent from 0.63 percent in 2005, according to statistics developed by PIERS, a sister product of JOC.com within IHS Markit.

The West Coast loss of market share was due in part to damaging labor disruptions associated with the 2002 and 2014 to 2015 contract negotiations. The ILA did not hesitate to use those developments as a marketing tool in 2015 at the JOC’s annual TPM conference when the president of the ILA local in Savannah told BCOs in attendance at the conference, “We want your business.”

If the ILA decides to work with East Coast employers on a contract extension, however, ILA president Harold Daggett has said he wants to first wrap up some local contracts before moving into negotiations to extend the master contract. Bargaining on local agreements has begun in several East and Gulf coast ports.

The ILWU’s voting procedures could take two to three months, based on the process that took place to ratify the current contract. ILWU and PMA negotiators reached a tentative agreement on Feb. 20, 2015, triggering a process of information sessions at all of the locals on the coast, ratification votes in each local, and then tabulation of the results and an announcement on May 22, 2015 that the contract was approved.

The key to this proposal, from the perspective of employers, is that it limits the terms of  the extension to wages, pensions, and length of the contract and avoids more nebulous and potentially controversial issues such as jurisdiction, that could lead to lengthy and  more contentious negotiations that would send the wrong message to BCOs.

McKenna said that if a contract extension is not agreed upon in the coming months, BCOs could begin to make alternative supply-chain logistics plans that would result in a potential loss of cargo, and work opportunities, at  West Coast ports.

The ILA and USMX on the East Coast have already begun negotiations in several port areas on local or regional contracts covering pensions, work rules, and other issues specific to each region. Local contract negotiations in New York-New Jersey have not yet begun. The ILA and New York Shipping Association are still working on implementation of several of the current contract’s productivity-enhancing measures, including a “relief gang” system to replace existing open-ended shifts that often stretch more than 24 hours and drive up overtime costs.

Top issues in the next coastwide negotiations are expected to include technology and work jurisdiction. Several ILA local leaders also have called for creation of a coastwide plan to shore up underfunded pension plans, which are negotiated port by port.

The issue of early negotiations for a contract extension is front and center today for BCOs following the contentious 2014 to 2015 negotiations on the West Coast that extended far beyond the July 1, 2014 expiration of the previous contract. That period was marked by ILWU work slowdowns, retaliation by employers who eliminated all opportunities for lucrative overtime pay, and eventually involvement by the US secretaries of Labor and Commerce.

The ILA hasn’t had a coastwide strike since 1977, but it came close to one during the 2012 to 2013 negotiations. The current six-year agreement was settled after repeated strike threats, two extensions, and help from a federal mediator.

Permalink Submitted by laborrelations@... on May 2, 2017 8:47AM EDT
Nice puff piece, now check out longshore-labor-relations.com if you want to read about what is really happening in the ILWU.

Global Shipping Outlook: A Sneak Peek at 2021
Port Performance North America: Managing Cargo Flow During a Pandemic — and Beyond
END_OF_DOCUMENT_TOKEN_TO_BE_REPLACED