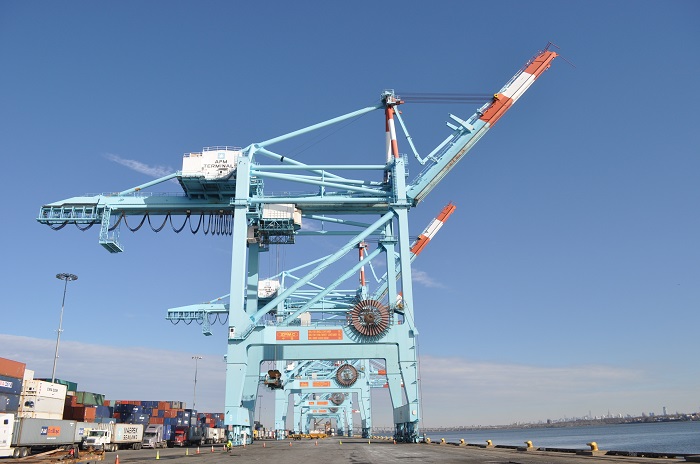 A giant crane awaits a container ship at the Port of New York and New Jersey. Photo credit: Shutterstock.com.

This week’s negotiations in Newark, New Jersey, were the first for the ILA and USMX since early December, when negotiations broke off after a disagreement over the contract’s definition of automated terminals, which ILA President Harold Daggett opposes.

Committees from both sides worked to develop a contract package to present to the ILA’s 200-member wage scale committee “in the near future,” the ILA and USMX said in a joint statement. The next step after that would be a coastwide ratification vote.

“We were able to accelerate master contract bargaining with smaller 20-member committees from the ILA and USMX to work out terms of agreement, Daggett and USMS Chairman David F. Adam said in a joint statement.

“We are confident that the work we have performed these past two days will ultimately lead to a six-year agreement that will bring stability and growth to our industry to 2024,” Daggett and Adam said. They would not comment further.

Beneficial cargo owners (BCOs) are anxious for an agreement well in advance of the Sept. 30 expiration of the current coastwide agreement.

When the ILA and USMX broke off master contract negotiations last December, Daggett said he was prepared to delay the resumption of bargaining until the contract expired. This month, however, the ILA and USMX indicated that a solution to the automation issue was in sight, and said they were ready to resume bargaining.

“The ILA has received assurances from USMX that issues and concerns regarding automation have been adequately addressed, opening a path toward successfully negotiating a new agreement well before the current master contract expires at the end of September,” the union and employers said in a joint statement on March 9.

The statement came after the National Retail Federation and more than 100 other organizations representing BCOs urged the union and employers to resume negotiations promptly in order to spare BCOs from having to implement costly contingency plans.

Although the ILA has not had a coastwide strike since 1977, supply chain managers keep a close eye on port labor issues and begin planning alternative routings when longshore contracts near expiration.

Timing is especially crucial for BCOs that are in the midst of annual rate-and-service contract negotiations with container lines in the trans-Pacific trades. The ILA-USMX contract was a prominent discussion topic at the JOC’s recent TPM 2018 conference in Long Beach, California.

The ILA came to the brink of a strike in 2012 to 2013 during its last previous round of contract bargaining. The union’s current contract was settled after a year of acrimonious, off-and-on bargaining that required two extensions and assistance from a federal mediator.

Pressure for an ILA-USMX agreement increased last year when the International Longshore and Warehouse Union and the Pacific Maritime Association agreed to extend their West Coast port labor contract to mid-2022. The six-year extension the ILA and USMX have been discussing would extend through September 2024.

The West Coast contract extension sought to reassure BCOs fed up with years of labor strife, including a 2002 lockout that idled West Coast ports for 10 days and severe work slowdowns that gridlocked Southern California ports in 2014 to 2015.

To hedge against supply chain risks, many BCOs have divided their cargo among multiple port gateways. The West Coast’s share of US containerized imports from Asia slipped to 65.3 percent last year from more than 78 percent in 2005, according to PIERS, a sister product of JOC.com.

This is an update on the ILA

Permalink Submitted by nancy_sallee@ea... on Mar 26, 2018 11:31AM EDT
This is an update on the ILA contact negotiations