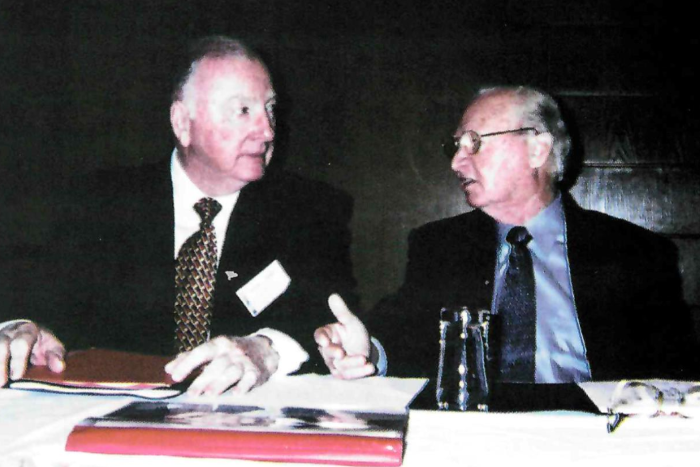 David Tolan, one of the pioneers of containerization as a longtime executive of Sea-Land Service Inc. who was especially influential in building positive longshore labor relations on the East and Gulf Coasts after decades of strife, died on Tuesday at age 88. His death was announced by his nephew, Patrick Burgoyne, chief operating officer at CMA CGM North America Inc.

The East Coast had seen a series of disruptive strikes from the 1950s through the late 1970s, but after the creation of the Carriers’ Cooperation Council (CCC) after a 1977 strike, with Tolan as its first and longtime chairman, longshore labor relations on the East and Gulf Coasts entered a prolonged peaceful period that continues today. That set the stage for significant growth of ports like Savannah, Houston, and New York-New Jersey as market share shifted from the chronically disruptive West Coast.

More than anyone else on the management side of the table, Tolan led that transformational change.

Through many a tough negotiation, Tolan earned the respect of the International Longshoreman’s Association (ILA). “I was proud to call him my friend,” ILA President Harold Daggett said in a statement Tuesday. “In his lead management role negotiating landmark Master Contract Agreements with the ILA, Dave Tolan always demonstrated unparalleled intelligence, professionalism, character, and integrity.

“His legacy and impact on our shipping industry — as the first leader of United States Maritime Alliance (USMX) and its predecessor management group, Carriers Container Council (CCC) — places Dave Tolan in the lofty ranks of Teddy Gleason, Malcolm McLean and Helen Bentley,” Daggett added. Teddy Gleason was a legondary ILA president and Helen Bentley was a fierce defender of the maritime industry as a maritime journalist, member of Congress representing Baltimore, and an FMC chairwomen. The Port of Baltimore is named in her honor.

Tolan joined Sea-Land in 1961 in the heady early days of containerization after spending six years at sea as a deck officer with Alcoa Steamship Co. and after graduating in 1955 from the State University of New York Maritime College at Fort Schuyler. Born and raised in New York City, he spent the next 38 years at Sea-Land in increasingly senior roles, including group vice president in the American division and senior vice president for labor relations.

Tolan studied labor law at the University of Puerto Rico while working there over eight years for Sea-Land, studies he pursued “because for a long period of time labor issues were highly contentious as containerization came into its own...” the United Seamen’s Service (USS) wrote upon naming Tolan its Admiral of the Ocean Sea (Aotos) in 2000.

“Sea-Land’s management, recognizing the serious challenges facing the industry in the labor-management relations arena, encouraged and supported Tolan’s initiative to stabilize the environment and create forums whereby the ocean carriers’ objectives could receive a more positive reception by the traditional collective bargaining parties,” according to a bio of Tolan.

That led to creation by carriers in the 1970s of the CCC, which according to Tolan’s bio became a formal party representing carriers in contract negotiations with the ILA, with Tolan eventually becoming the chief negotiator for management in negotiations with the union. Later he became chairman of the USMX, comprised of carriers and terminal operators, which still leads the management side in negotiations with the ILA. In these roles, Tolan “helped guide the transition from the chaotic port-by-port bargaining that prevailed when breakbulk dominated into the coastwide bargaining that exists today,” said former JOC editor Joe Bonney, who extensively covered longshore labor relations.

“The two parties were able to establish collective bargaining agreements which benefited both sides and laid the groundwork for continuity of operations, improved productivity, the implementation of technological change and enhanced wages, safety and benefits for the ILA represented workers,” according to Tolan’s bio. He formed productive working relationships with labor leaders, including John Bowers, who led the ILA from 1987 to 2007.

As Tolan wrote in his last chairman's letter for the CCC in 2002, he said, "CCC has lived up to its mission--the ILA has indeed become more competitive, the industry has enjoyed a coast-wide labor peace unbroken for 25 years, and labor and management have together created a collective bargaining process enhanced by mutual and growing trust, not undermined by strikes and slowdowns."

“Dave was able to achieve incredible results through his creativity, energy and strong and compassionate understanding of the workplace and the special role laborers played in shipping worldwide,” said Chuck Raymond, who worked under Tolan in Puerto Rico and considered him a mentor. Raymond was CEO of Horizon Lines, the domestic Jones Act carrier created in 2003 after the 1999 sale of the Sea-Land international business to Maersk.

Tolan’s labor focus at Sea-Land wasn’t just limited to longshore labor. Sea-Land had contracts at one point with a total of 12 unions, including several sea-going unions representing officers, engineers, and unlicensed deck and engine room crew members. Tolan negotiated agreements that reduced the number of seafarers required to crew the vessel. He negotiated agreements that reduced the number of crew from 42 down to an average of 21 mariners.

Tolan "was instrumental in aligning the union activities to the new container movement, including not just the longshore labor unions, but the seagoing unions as well," said Anthony Scioscia, a longtime senior labor relations executive with Sea-Land and Maersk. "His efforts brought the labor movement and management into sync in terms of containerization and in doing so he was very effective. The unions, including the ILA and ILWU, might not have agreed with him, but they certainly respected him."

According to the USS, Tolan first came ashore after seeing the decline of the American-flag Alcoa fleet and realizing that his seagoing career opportunities were limited. He joined Sea-Land five years after the first voyage of the Ideal X in April 1956 launched the era of containerization. But even in 1961 containerization remained in its infancy, with the main east-west liner services still several years away from making the transition from breakbulk to containers. But the culture of innovation that would successfully achieve that historic transition was very much alive at Sea-Land.

“We knew Malcom (McLean) was the visionary, there was no doubt about that,” Tolan told USS. “But I accepted the concept at a very early age, too, and was a strong proponent of these wonderful new ideas we were bouncing around at Sea-Land.”

Tolan’s first role with Sea-Land was as a Marine Manager and Stevedoring Superintendent, where he saw the complex jurisdictional relationships between the ILA and Teamsters.

He further recalled, “it was certainly a challenge to make the trucking community understand the limitations of ships to be sure, but we sailors had to gain a better grasp of the basics of trucking as well. Our approach always was to say ‘this is what we want to do, so let’s dispense with preconceived notions and parochial positions and figure out how we can get it done.’ It was a paradigm shift for the trucking guys and the maritime people, too.”

In those days, Tolan said, “we saw the advent of ‘just-in-time’ delivery systems, a way to eliminate large inventories. It became apparent we couldn’t just move cargo from Port A to Port B anymore. We had to develop seamless systems to allow shippers to move their products in a controlled, continuous steam. Containerization fit nicely into that approach.”

As Tolan said upon his Aotos induction: “I’ve been involved with labor at every level for a long time and I have learned that the most important message we can give to the unions is that real job security could only come from their ability and willingness to adapt to change.”

Navigating the Winding Roads This Peak Season & Beyond
END_OF_DOCUMENT_TOKEN_TO_BE_REPLACED