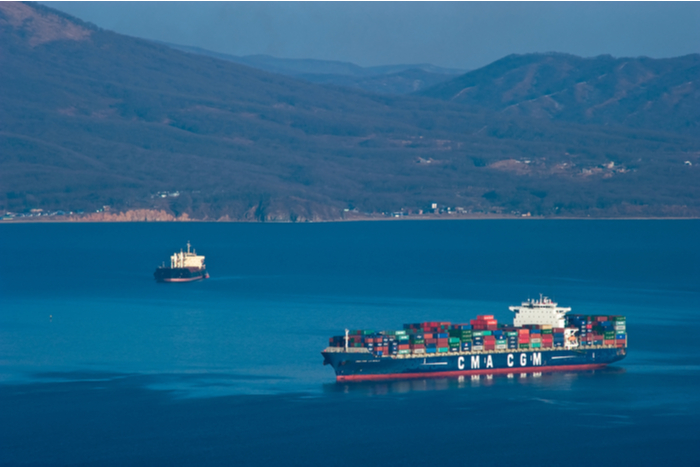 CMA CGM will receive a $1.14 billion state-guaranteed loan that will free up cash for the debt-strapped carrier. Photo credit: Shutterstock.com.

The fact that carriers are reducing capacity to support freight rates shows that state aid to container shipping companies is not having an impact on the competitive dynamics of the industry, according to Credit Suisse analyst Neil Glynn.

The investment bank’s managing director and head of European transport equity research told JOC Uncharted Wednesday that it was “reassuring” that even carriers receiving state aid were “taking capacity out in the same way as other carriers.”

Large-scale blank sailing programs have been implemented through the third quarter by THE Alliance carriers Hapag-Lloyd, Ocean Network Express, Yang Ming, and HMM, and the 2M Alliance of Maersk and Mediterranean Shipping Co. on the Asia-Europe, trans-Pacific, and trans-Atlantic trades.

Glynn also gave CMA CGM’s efforts to reduce its high debt levels as another example of a financially disciplined carrier. “It is receiving over a billion dollars of partially government-backed debt, and is also clearly trying to sell down assets to reduce its debt pile,” he said. “That is not consistent with a carrier that is taking state aid and not trying to manage its business as a going concern.”

CMA CGM will receive a $1.14 billion state-guaranteed loan that will free up cash for the carrier, which emerged from 2019 with debt levels of $17.8 billion that it is urgently working to pare down following a $229 million loss for the year. The asset sale Glynn referred to was an agreement the carrier reached with China Merchants Port (CMP) to sell its stakes in eight port terminals to Terminal Link, a joint venture created in 2013 that is 51 percent owned by CMA CGM and 49 percent by CMP.

Other debt-strapped carriers that have received government help are HMM, which received $500 million of a shipping sector emergency package, and Yang Ming, which is 45 percent owned by the Taiwan government and will receive $291 million in state support via a government-backed loan. HMM lost $261 million last year, while Yang Ming reported losses of $144 million.

Nilesh Tiwary, manager of Drewry Maritime Financial Research, said a loan guaranteed by the government should not automatically be considered as state aid. “But we know there are some container lines that operate beyond their means because they have strong state backing,” he told JOC Uncharted. “In some cases, their operating costs are as high as equaling 100 percent of their revenues.”

Maersk Group CEO Søren Skou has long been critical of subsidies offered by Asian governments to the shipping industry, and after the HMM and Yang Ming financial assistance was announced in May, he called it “unacceptable” and urged the European Commission (EC) to address the “unfair competition.”

As it happens, the EC this week launched a white paper and public consultation on the “the distortive effects of foreign subsidies on Europe’s single market.” The feedback period closes Sept. 23 and will be used to guide legislative proposals that address foreign subsidies across all industries.

Glynn said the rationale around financial support from a state perspective was to preserve employment while safeguarding economic interests, assets, and connectivity for the national economies.

“That is clearly understandable,” he said. “But for many transport companies, there is an ongoing debate as to how repayable some of those sources of financing actually are, and whether the debt is repaid or ends up becoming quasi-equity. That is something being very hotly debated in the liner sector.”