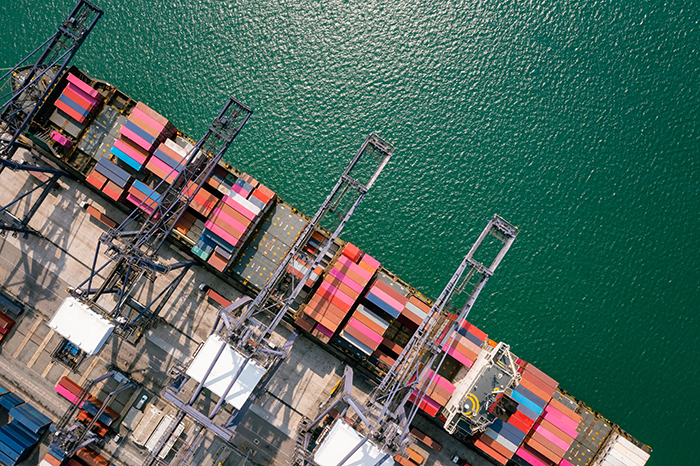 Container lines have $12.86 of earnings before interest and tax (EBIT) for every dollar of interest they owed, a massive change from as recently as 2018. Photo credit: Shutterstock.com.

Container lines are on course for a profits bonanza of approximately $300 billion in 2021 and 2022, according to Drewry, eye-popping figures that make previously lucrative cycles seem quaint in comparison.

But two questions loom going forward: just what those lines plan to do with their individual windfalls, and whether their new financial footings will create a fundamentally different operating environment.

To take a notable example of this newfound buying power, in upgrading Maersk’s credit rating to BBB+ in mid-September, S&P Global forecast that “Maersk will generate strong discretionary cash flow (after leases, capital expenditure, dividends, and share buybacks) of up to $8.5 billion in 2021.”

According to discussions with a range of industry watchers, the options to deploy those profits include acquisitions, debt repayment, dividends or share buybacks, technology investments, or rainy-day funds for future capital expenditure or acquisition activity.

“Some are going for acquisitions, others are building or chartering vessels, some are buying terminals,” Bjorn Vang Jensen, vice president of global supply chain advisory services for Sea-Intelligence, told JOC.com. “Outside of Maersk, carriers are sticking to their core business. To the extent that those need to be upgraded with hardware or software, that will happen. However, outside of these fairly large spending sprees, I think the remainder of the windfalls will be salted away for the rainy days that will inevitably come.”

To be clear, the paths each carrier takes will be different. Some lines have already ventured down the path of vertical integration and adjacent asset acquisition, while others have channeled cash toward technological initiatives. Even within a growing technology spend category, there is a path that prioritizes greater digital engagement with customers, and a path that focuses on internal optimization and decision-making.

“With record profits coming in, people will be watching how these companies spend their cash,” AlixPartners Director Brian Nemeth told JOC.com. “Making the wrong investment now could be the difference-maker in the future, and they might not have an opportunity like this again.”

And underlying all of this is an expectation from shippers that 2020 and 2021 profits will be spent, at least in part, on better serving them.

The acquisition of fellow container lines, whether regional, feeder, or global, is one path, although a spate of consolidation the past seven years has already seen Hamburg Süd absorbed into Maersk; APL acquired by CMA CGM; UASC, CSAV, and NileDutch acquired by Hapag-Lloyd; and Japan’s former trio of independent carriers merged into Ocean Network Express (ONE) — not to mention the bankruptcy of Hanjin Shipping in 2016.

Container lines could instead look to purchase traditional shipping assets, such as vessels, terminals, and containers.

Hapag-Lloyd has made a sizable investment in the latter, buying 285,000 TEU of dry and reefer containers to be delivered by the end of 2021. That represents about 10 percent of its current fleet of boxes. Rolf Habben Jansen, CEO of the German line, said in mid-November Hapag-Lloyd would prioritize investment in terminals over other options.

“The likelihood we will start investing in the areas our competitors have done, such as forwarding, warehousing, or air freight, is very slim,” Habben Jansen said in a Nov. 18 media briefing. “That’s not to say their strategy is wrong, just that it is different and is not something we intend to follow. We still see liner shipping as the core of our business.”

The competitors Habben Jansen referenced, notably CMA CGM and Maersk, prioritized investment in vertical integration long before the pandemic, but even CMA CGM sees terminals as key assets again. The French carrier repurchased the Fenix Marine Services container terminal in the Port of Los Angeles for $3.2 billion on Nov. 3, just four years after selling a majority stake in that facility.

In terms of vessels, Evergreen has been the most active buyer of new ships, committing to the purchase of 46 vessels in 2021, more than half of which are 15,000 TEU or larger. Maersk ordered eight 16,000 TEU ships that will be powered by methanol. HMM in mid-2021 announced the purchase of 12 13,000 TEU ships for approximately $1.6 billion. Hapag-Lloyd has on order the equivalent of approximately 20 percent of its active fleet of about 1.7 million TEU, including 12 vessels of 23,000 TEU and 10 13,000 TEU vessels.

Carriers could also look to purchase shipping-adjacent assets that push them into the territory of vertical integration, such as warehouses and fulfillment centers; cargo planes; trucking companies, drayage operators, or intermodal service providers; and parcel and last-mile delivery companies.

Another avenue is the purchase of non-asset or asset-light service providers, such as forwarders, non-vessel-operating common carriers (NVOs), customs brokers, domestic freight brokers in various regions, or parcel and final mile service aggregators.

Maersk, which has been pursuing its container integrator strategy since 2017, is the most aggressive container line in this area, having acquired a range of assets, including customs brokers on both sides of the Atlantic and a US last-mile fulfillment provider. CMA CGM’s purchase and integration of CEVA Logistics is another example.

Technology is an investment area that all lines are likely to pursue in the years ahead, regardless of other financing priorities. Where low-rate environments could once be used as a convenient excuse not to invest in innovation, container lines’ customers won’t countenance them turning a blind eye to systemic digital problem areas on the back of billions of dollars of profits this year.

That investment could include the development or purchase of customer-facing software, such as transportation management systems and control towers, or it could address more niche customer pain points such as billing and online quoting. More inward-facing investments could focus on areas such as network planning and asset tracking databases. For example, multiple container shipping experts have told JOC.com that the systems carriers use to track containers globally are antiquated and thus are poorly integrated with other, more modern systems the carriers use.

Investments in technology by individual lines could further hamper adoption of standardized formats for everything from track-and-trace milestones to port and facility codes developed by the Digital Container Shipping Association.

Another technology path could see container lines invest in exotic startups outside the usual scope of container activities, such as Maersk’s purchase of fast fashion inventory management and fulfillment software provider HUUB in September. Both Maersk and CMA CGM have also devoted a tranche of funds to investing in up-and-coming technology startups, Maersk through its Maersk Growth venture fund and CMA CGM as a corporate sponsor of the ZEBOX technology accelerator.

A more pressing path may involve container lines committing their profits to meeting looming environmental mandates, whether self-imposed or required by various regulatory entities. Those investments, many of which have already begun, include development of alternative fuels, infrastructure to support clean energy, and, of course, vessels that use clean energy and produce fewer emissions per container moved.

Container lines may alternatively wish to reward shareholders and investors, who patiently stuck it out the last decade, through share buybacks or increased dividends. To use Maersk as an example again, S&P Global noted that the carrier completed an existing $1.6 billion share repurchase program Sept. 30, to be followed by a new $5 billion buyback program over the next two years.

Development of rainy-day funds for general capital expenditure or specific initiatives such as alternative fuels development is another possibility. Lines will be under increased public pressure to move to net-zero carbon emissions, especially as the industry’s stockpile of earnings this year collides with greater scrutiny of shipping’s role in climate change.

All these possible investment channels are possible due to the extraordinary demand and rate environment created during the pandemic, and an array of financial metrics compiled for JOC.com by the consulting firm AlixPartners confirms that carriers are in as strong a collective position as they have ever been.

Perhaps most telling is AlixPartners’ data showing that the container shipping industry’s ability to repay interest on its outstanding debt is at an almost unfathomably healthy level relative to the global financial crisis more than a decade ago.

“One of the questions carriers have to consider is whether to show some love to shareholders that stuck with them through the tough times versus reducing debt,” AlixPartners’ Nemeth said.

That metric reached a low-water mark in 2012, with carriers losing $2.58 in EBIT for every dollar of interest they owed.

Other metrics provided by AlixPartners paint a similar picture. Container lines’ aggregate Altman Z-Score in 2021 (on a trailing 12-month basis) has risen to a recent high of 2.33, up from 1.15 in 2019. The Altman Z-Score is a predictive index measuring whether a company is headed for bankruptcy. Scores below 1.8 indicate a company in distress, while a score over 3.0 is considered safe. Those in the middle are considered a moderate risk.

The industry as a whole has been entrenched in the distress zone for the last decade, with the aggregate score ranging between 1.14 in 2013 to 1.64 in 2018 (with a pre-2021 high of 1.85 in 2010). Nemeth noted to JOC.com that despite historic profits in 2021, the industry has still not made it to the Z-Score safe zone. He added that it’s very possible 2021 calendar year financials, versus the last 12 months utilized for this analysis, will get them there.

A third, perhaps less surprising metric, is the exponential growth of container lines’ operating margin over the past 12 months. That measure has risen to 28 percent, compared with 4 percent in 2016, the year Hanjin went bankrupt, the only such casualty over a decade in which a number of lines danced on the financial brink.

The ability for carriers to service their debt (or spend their profits elsewhere) is probably the key dynamic as the industry lurches into an uncertain 2022. Paying down debt on vessels already in service allows lines to move away from focusing on full vessels at the expense of compensatory rates and move toward a strategy of long-term contracts, vertically integrated services, and indeed, higher rates per container.

“Rising [capital expenditure] will be a persistent theme over the next decade as container lines seek to make their fleets more energy efficient,” Daniel Harlid, a vice president and senior analyst with Moody’s, told JOC.com. “Although Moody’s rated shipping companies have paid down substantial amounts of debt during the pandemic, continued early repayments are unlikely to take priority given already materially deleveraged balance sheets and the need to respond to new environmental regulations. However, we could see continued [acquisition] activity over the next few years.”

But that makes AlixPartners’ interest coverage metric perhaps even more illuminating. There’s likely cash for carriers to both pay off unattractive debt and pursue growth priorities or repay investors that patiently waited the last decade for a turn of fortunes.

Some observers have told JOC.com that carriers’ attitudes toward 2022 trans-Pacific contract negotiations are a bellwether. The thinking is that they are bracing for a potentially steep turn in the supply-demand balance in early 2023, when congestion eases and frees up capacity, when new ships ordered in 2020 and 2021 come online, and when consumer demand might taper off.

While the power to use profits from 2021 to grow horizontally and vertically is likely a temptation, one container line veteran that did not want to be named told JOC.com it will be hard for shipping line executives to redirect their vision away from cost-cutting and toward growth, especially after a decade at the financial precipice.

Those pending external dynamics may well color how carriers channel their historic profits the past 12 months.