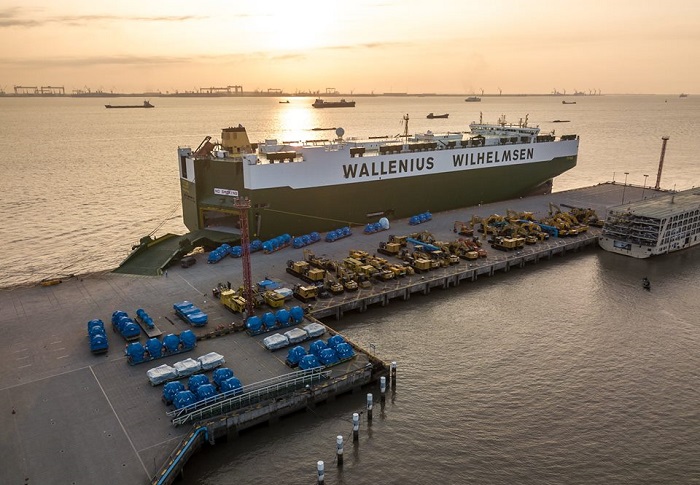 Under the International Maritime Organization's rule, starting in 2020, ships will only be allowed to emit 0.5 percent sulfur, down from the currently acceptable level of 3.5 percent. Photo credit: Wallenius Wilhelmsen.

With a risk mitigation strategy designed to put Wallenius Wilhelmsen out ahead of the International Maritime Organization's (IMO) new sulfur rules, the global roll-on, roll-off carrier will have 20 vessels retrofitted with scrubbers over the next few years.

During the carrier's second-quarter earnings presentation, CEO Craig Jasienski said that the plan was expected to cost $6 million to $7 million per vessel, including dry docking and time lost in service. Under the IMO rule, starting in 2020, ships will only be allowed to emit 0.5 percent sulfur, down from the currently acceptable level of 3.5 percent. Emissions control areas will continue at the current standard of 0.1 percent sulfur.

Implementation of the IMO's sulfur regulations is expected to have seismic repercussions throughout the shipping industry. Wallenius Wilhelmsen noted that availability and quality of compliant bunker fuel will be very difficult to ascertain, and fuel costs are expected to increase by 50 percent.

According to its quarterly report, the carrier is "relatively well covered" by sulfur bunker adjustment factors with its larger customer contracts, and it plans to add similar clauses for remaining contracts.

Wallenius Wilhelmsen operates a fleet of about 127 vessels, with another 10 currently chartered. Vessels without scrubbers will operate using different types of low-sulfur fuel, the report said.

Facing estimates of billions of dollars in annual costs, the ocean shipping industry is taking different approaches to meeting the new rule. Some such as Maersk have committed to buying the more expensive fuel while others such as CMA CGM are betting on liquefied natural gas power to meet the mandate.

Larger questions are being asked in the industry of whether carriers will be able to fully recoup the additional costs need to meet the rule.

Ocean freight rates may slide to pre-pandemic levels by end of year: HSBC