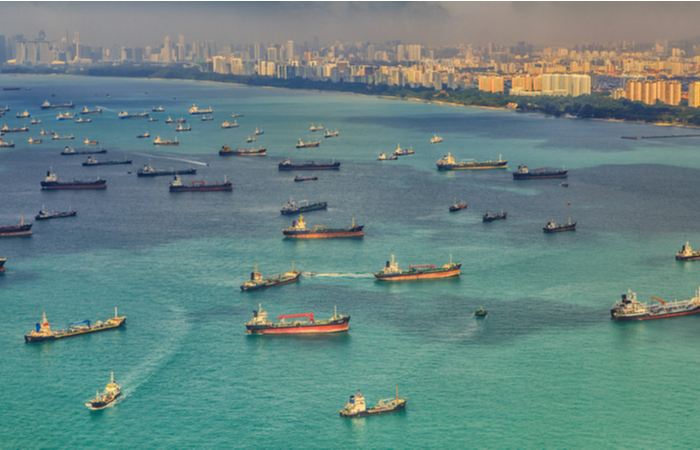 A lack of direct services from South Asia to the US means that vessels have to transship in Singapore, as more production moves to the region from China. Photo credit: Shutterstock.com.

Limited manufacturing capacity and freight infrastructure in South Asia will cap how much production can be shifted away from China to avoid United States tariffs, logistics and sourcing experts told the 18th Annual Northeast Cargo Symposium in Providence, Rhode Island.

Although ocean carrier capacity from South Asia has increased since the US-China trade war began, the lack of direct routes and extra shipping complexity required by transshipment, as well as a shortage of production skills, could stifle the growth in cargo leaving the region, speakers said.

Jack Daniels, president and CEO of EastBridge Strategic Sourcing, said the company ran into deficiencies in carrier service when it began making backpacks in Vietnam for a Massachusetts medical device company to avoid the US tariffs after making them for years in South China.

“There are no vessels that go directly from Myanmar to the United States,” Daniels said at the symposium, held last week, adding the cargo has to go to Singapore to be transshipped and sent to the US. The service, he added, “doesn't go every day of the week. It only goes a few days a week. And the forwarders there are not as sophisticated as the forwarders we are accustomed to dealing with.”

The US last year imposed tariffs of 10 percent on Chinese-made goods worth $250 billion, and this May raised the tariffs on $200 billion of Chinese products from 10 percent to 25 percent. China retaliated with its own tariffs. An additional list that targeted $300 billion of Chinese imports not already under tariff was due to take effect on Sept. 1, but President Donald Trump postponed the deadline to Dec. 15.

Chinese imports into the United States declined 5 percent in the first six months of the year against the same period in 2018, after the US levied the tariffs on Chinese goods, as some manufacturers looked to shift production to other low-cost countries, according to data from PIERS, a JOC sister company within IHS Markit. Imports from Vietnam were up 30.5 percent, the data shows, and the shift to South Asia production is expected to send more cargo to the US East Coast through the Suez Canal, from which services to US East Coast ports are more competitive than via the Panama Canal.

Amy Elmore, director of international logistics for Bob's Discount Furniture, said that in moving about 25 to 30 percent of its production in South China to factories in Vietnam a year ago, the company came across similar drawbacks in carrier service. Having to transship cargo created an additional “pain point,” and the company experienced far more rolled cargo than it had seen in shipping from South China, she said.

“There are hidden costs to any sourcing shift you make,” she said, adding that there is still too little ocean carrier coverage in certain areas. “They're not there. You can make the best product, and the best price, but if you can't get it where you need to get it, it's not worth it.”

Carriers added four strings for a total of 18 weekly services from Southeast Asia to North America this past year, according to Sea-Intelligence Maritime Consulting, but ships leaving Vietnam are mostly full.

Sri Laxmana, vice president of global ocean services for C.H. Robinson, said he expects the number of carrier services to increase between Southeast Asia and the US through the Suez Canal.

“Even if the trade war ends tomorrow, I just feel that Southeast Asia is going to continue to be an area that will get a lot more attention,” he said. The level of activity will depend on whether countries like Myanmar and Cambodia create deep, efficient ports that can “justify direct services,” or whether cargo leaving those countries for the US is going to be transshipped, he said.