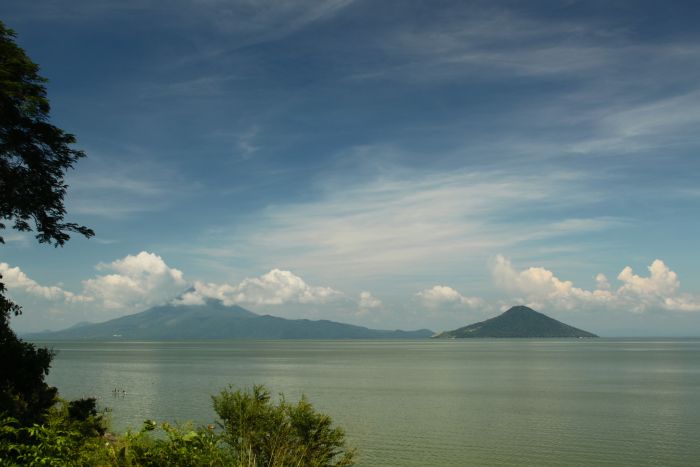 When the Nicaraguan government earlier this month approved plans by a Hong Kong-based company to build a canal linking the Pacific with the Caribbean and thus the Atlantic, observers in the maritime industry were largely left scratching their heads.

The HK Nicaragua Canal Development Investment Co.’s proposal to build a 173-mile canal raise numerous concerns about environmental issues, the danger of earthquakes or volcanic eruptions and how it could be financed, but most of all about its  cost, which the company estimates at $40 billion.

While $40 billion might suffice to build a sea-level canal, it won’t go very far if HKND plans to build locks, which it states on its website it will do, but it doesn’t go into details on where they would be and their size.

The proposed channel, which would measure anywhere from 754 feet to 1,706 feet wide and 90 feet deep, starts from the mouth of the Brito River on the Pacific side, passes through Lake Nicaragua, and ends in the Punto Gorda River in the Caribbean. The fresh-water lake is 107 feet above sea level, which means the group would have to build locks on both sides of the lake. 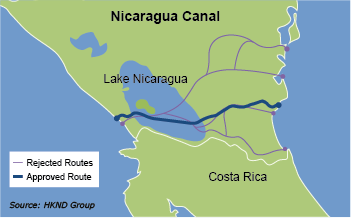 Approved and rejected routes for the planned Nicaragua canal.

By contrast, Gatun Lake, up to which the Panama Canal Authority is building a third set of locks at a cost of $5.25 billion, is 85 feet above sea level.

“If the Nicaragua canal will ever be built, the final cost will be much higher than $40 billion,” said Chaim Sacham, a former senior executive with Zim Integrated Shipping Services, who is now an independent consultant. “This is not to say that it will not be built, but if it will be built, it will be a waste of a lot of money, and it will not bring any positive ROI for many years, if at all.”

Nicaraguan President Daniel Ortega awarded the contract for the canal on a no-bid basis to HKND Group. “To the best of my knowledge, HKND Group and its chairman, Wang Jing, have nothing to do with engineering and/or construction,” Sacham said. “However, under the exclusive contract, Wang can skip building the canal (and making any payments to Nicaragua) and instead simply operate lucrative tax-free side projects. This leads me to say that if this canal will ever be built, it will not be by HKND Group but by others, and it will take much longer than the five years that they are saying it will take.”

HKND’s plan is to build a canal that will be able to accommodate the largest ships that are likely to be built up through the year 2030. Although the proposal does not specify the precise size of the ships its locks would handle, the HKND website says it will “be able to accommodate super-post-Panamax ships up to about 23,000 20-foot-equivalent units, and will offer the shortest shipping route between Asia and many U.S. East Coast ports.”

“Who needs it?” Sacham said. “When the new locks are finished, the Panama Canal will be able to handle ships of up to 12,500 TEUs, but East Coast ports won’t be ready to handle ships that big for five years.”

The largest container ships afloat today, Maersk Line’s Triple E class of 18,000 TEUs, are 1,312 feet long, 194 feet wide and have a draft of 48 feet. The Triple E ships are too large to fit through the fourth set of locks being built by the Panama Canal, which are supposed to be open in January 2016. The new locks will be 1,400 feet long, 180 feet wide and 60 feet deep and will be able to accommodate ships up to 1,200 feet long.

A Nicaraguan canal would provide a larger and slightly shorter alternative to the Panama Canal for Asian goods being transported to the U.S. East Coast, but channel size alone might not be enough. “The key is project viability,” said Walter Kemmsies,” chief economist for Moffatt & Nichol, a port design and engineering consultancy. “It’s not clear that they have checked all the boxes to get the project off the ground.”

Kemmsies said the HKND Group would have to meet strict environmental requirements by international lending institutions before it could raise the capital to fund the project. “What about invasive species?” he said. “If you have sea snakes from the Pacific coming through the canal into the Caribbean, would this affect Caribbean tourism?”

Another environmental concern is that seawater from the approach channels would mix with the fresh water of the lake, which is Central America’s largest lake and a major source of drinking water and irrigation. It also hosts a number of rare and endangered species in small ecosystems within its waters, which could be endangered by the required dredging for the canal, not to mention the potential for contamination by sediment from the dredging operation.

“It would have to offer something competitive with Panama in terms of lower cost and shorter transit time,” said John Wheeler, vice president of sales for the South Carolina Ports Authority. “We are hearing that shippers will pay for a faster transit.” He said there would be an opportunity for a canal that accommodates larger post-Panamax ships. “In five to seven years, you will have container ships of 13,000 to 14,000 TEUs coming up the East Coast.” Ships of that size would be too large to transit the Panama Canal’s new set of locks and also too large to be unloaded by the ship-to-shore cranes at most East Coast ports, which need to be taller to reach across their stacks of containers.

The Panama Canal Authority has repeatedly declared its intent to remain competitive with other ocean routes to the U.S. East Coast. Canal Administrator Jorge Quijano said the authority keeps a close watch on the cost of competing routes for Asian cargo shipments to the U.S. Midwest and East Coast such as mini-landbridge from West Coast ports or the Suez Canal in planning toll increases.

Quijano told JOC.com in an interview in June that the authority is already studying the possibility of building even larger locks than the set now under construction, and has chosen a place for them. “We will only build a bigger fourth set of locks if the demand is there,” Quijano said.

The HKND Group plans to start work on the canal in December and complete it in five years at an estimated cost of $40 billion. HKND said the Nicaragua canal would employ 50,000 workers during the construction phase and create another 100,000 permanent jobs when complete. But former Panama Canal Administrator Alberto Aleman Zubieta said the project could cost as much as $100 billion.

The problem is that Nicaragua lacks the ports, the infrastructure and the skilled labor force to support such a project. HKND said it plans six subprojects to support the canal, including two new ports, a free trade zone, tourist resorts, an international airport and several roads.

“It would be a pharaonic project saddled on a tiny nation with few resources and flagging development,” said Rosemary Werrett, a Latin American specialist with the Observatory Group, a macro economic and political advisory firm. The project would likely touch off massive inflation in Nicaragua, which does not have the resources or workforce to support it. “The Chinese have a practice of bringing in Chinese workers for a project this size,” she said.

Wang, the HKND Group’s founder, is a 41-year-old telecom executive who is also its chairman, CEO and owner. He is little known outside of China. According to his bio on HKND’s website, he is “board chairman of more than 20 enterprises which operate businesses in 35 countries.” It also says “Jing has founded or invested in businesses across major infrastructure, mining, aviation and telecommunications sectors.” Jing has said his group is a private enterprise that will build the canal without Chinese government financing.

The group would presumably have to raise capital to fund the project on international capital markets. Even if it does get some support from China, the country’s $600 billion sovereign wealth fund, the China Investment Corp., only allocates $100 billion for projects outside the country, with most of that focused on Africa and South America, Werrett said.

“It’s a hell of a thing to try to compete with the Panama Canal,” said Mark Sisson, senior port planner/analyst at AECOM, a port design and engineering firm. “It would have huge fixed costs in terms of debt payments that it would have to pass through to shipping lines.” If the Chinese government does support the project, it may do so for geopolitical reasons rather than commercial. “Maybe the Chinese government wants to buy its own canal. They have all the money in the world, so maybe they don’t care about a return on investment,” Sisson said.

It has nothing to do with

Permalink Submitted by Todd_lacasse@do... on Jul 28, 2014 4:40PM EDT
It has nothing to do with business, it will give the Chinese military global access. Have you seen their latest military ship designs?

Wonderful to have some

Permalink Submitted by mszazu@gmail.com on Nov 2, 2014 6:50PM EST
Wonderful to have some "brains" reporting on this madness that Wang has in mind. We here on Isla de Ometepe know full well the impact this proposed canal would have. Aside from the nearly daily seismic activity, the co-mixing of sea water with the lake would be disastrous for Nicaragua. already the Chinese have visited our island and offering mmoney for land. Of course, with eminent domain supported mby Ortega, they can take what they want for their sideline projects. The must be stopped.
Maritime News›International Freight Shipping
Regulation & Policy›Infrastructure News›Central America Infrastructure News
Central America›Nicaragua