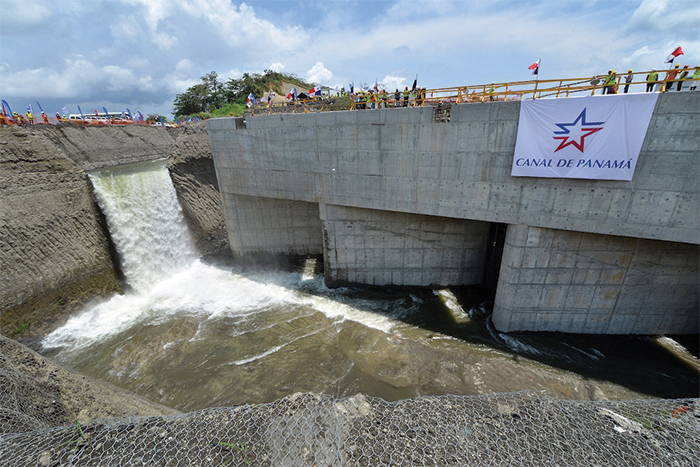 The new locks at the Pacific end of the Panama Canal began to fill with water in late June in preparation for months of testing of their new gates before they open to commercial traffic next April.

The flooding of the Pacific locks, following that of the Atlantic locks earlier in the month, puts the $5.25 canal expansion project on track with the revised timetable for completion that was established last year.

When the canal’s third set of locks finally does open next April, the expansion will be a year-and-a-half behind the original opening date of October 2014 and approximately $100 million over the original budget. Still, Jorge Quijano, the Panama Canal Authority’s administrator, thinks the canal will make up for lost time and revenue. “We expect some of the diversion from the West Coast to continue, and we expect to grab back most, if not all of what we have lost (to the Suez Canal) by not having post-Panamax vessel capacity,” Quijano told The Journal of Commerce.

Although the West Coast labor contract with the International Longshore and Warehouse Union was finally signed in May, Quijano said shippers have told him they expect problems to continue on the landside, so they may shift as much as 15 percent of the Asian cargo volume to the East Coast through the Panama Canal. “We have been seeing more utilization of vessels moving through the canal to the East Coast,” he said.

So-called sweeper vessels that aren’t part of scheduled services also are carrying more cargo from Asia to the East Coast.

Historically, U.S. West Coast ports have been the Panama Canal’s main competitor for Asian cargo moving to the eastern half of the U.S., but the Suez Canal became a larger player in recent years as carriers cut costs by shifting a lot of volume moving to the East Coast onto larger, more fuel-efficient container ships that couldn’t transit the Panama Canal. “Come completion of the expansion next year, we should be able to recover most of what has gone through Suez, so that will be a significant amount of growth in the container sector,” Quijano said.

The canal authority will increase its tolls on all vessel sectors when the new locks open, but it will introduce a loyalty program for ocean carriers that are frequent users of the canal.

The authority also will take more risk with container lines because it will charge less for ships that aren’t fully loaded. “That way if our customers are not doing too hot, we will be carrying some of the burden, but if they are doing very well and the vessel is fully loaded, we also be benefiting from the windfall they are experiencing,” Quijano said.

Although the Panama Canal tolls are slightly higher than those of Suez, Quijano said the overall cost of the all-water route from Asia to the East Coast is much lower. The round-trip transit time is 10 days shorter via Panama, he said. “Ten days shorter is a lot of fuel, it’s a lot of time, it’s a lot of capital, a lot of crew costs and it’s also a lot less emissions,” Quijano said.

Container ships that use the Panama Canal also are frequent users of the transshipment hubs at both ends of the canal for transferring cargo to other ships that call at ports on the east and west coasts of South America, throughout the Caribbean and Central America. “That’s an added value to coming through Panama,” Quijano said. “Eighty percent of the container vessels that transit the Panama Canal stop at one of the local ports, and often at both ends.”

Panama’s Atlantic ports, he said, have plenty of capacity to handle the growth in transshipment he expects, but those at the Pacific entrance need more capacity. The canal authority has asked the Panamanian government to pass legislation that would enable it to issue a tender for port developers to build a new container port at Corozal on land it owns near the Pacific entrance of the canal. “It could add $70 million to
$80 million in annual revenue,” Quijano said. Up to five operators have expressed interest in bidding on the project.

In addition to a new terminal at Corozal, PSA International of Singapore is expanding its container terminal near the Pacific entrance on the west bank of the canal on the opposite side from Balboa. PSA is expanding the annual capacity of the terminal from 450,000 20-foot-equivalent units to as much as 2 million TEUs. Although the site isn’t on the same side of the canal as the Panama railroad, PSA has an agreement with a local trucking company to move its cargo to the Atlantic side.

Quijano doesn’t perceive the proposed canal through Nicaragua as a realistic competitor. A privately owned Hong Kong-based company has signed an agreement with the Nicaraguan government to build a 173-mile canal at a cost it estimates at $40 billion, but which many say could run much higher. “If it’s going to be a private investment, then it’s not feasible to have a return,” he said. “They would have to charge twice the tolls that we charge to make the investment have some kind of payback.”

The canal authority hasn’t decided about building a fourth set of locks that could handle the kind of ships with capacities of more than 14,000 TEUs that would be able to transit the proposed Nicaragua canal but not the new Panama locks.

“We feel that the size of vessels that we will be able to handle after the expansion will be sufficient at this time,” Quijano said. “Several Chinese companies have shown interest in building and financing a fourth set of locks, but what I have told all of them is that we are going to start studying demand and how we can do other things to augment the canal’s capacity, before making any decision.”

The canal administrator acknowledged that the expansion project already has cost more than the original $5.25 billion target, but he declined to estimate how much it would cost in the long run. After a dispute with GUPC, the lead contractor that built the new locks, over cost overruns, an arbitrator ruled in January that the canal authority had to pay GUPC $233 million of the $463 million the engineering consortium had sought.

The canal authority already has paid the $233 million, but is appealing the arbitrator’s decision. “We are taking that to arbitration ourselves, and we expect to recover that money,” Quijano said. The payment used up the $100 million to $200 million in contingency funds that were part of the original budget. “By the time we complete this year, we’ll be over (budget) by maybe $100 million.”

The canal authority still faces a bigger budget-buster if another arbitration panel rules on more GUPC claims for $2.3 billion in cost overruns. That panel will hold its first hearing on the issue in December in Miami. “I cannot anticipate what the final cost will be,” Quijano said, “but we have strong cases, and we’ll see how it turns out in the end.”

Navigating the Winding Roads This Peak Season & Beyond
END_OF_DOCUMENT_TOKEN_TO_BE_REPLACED