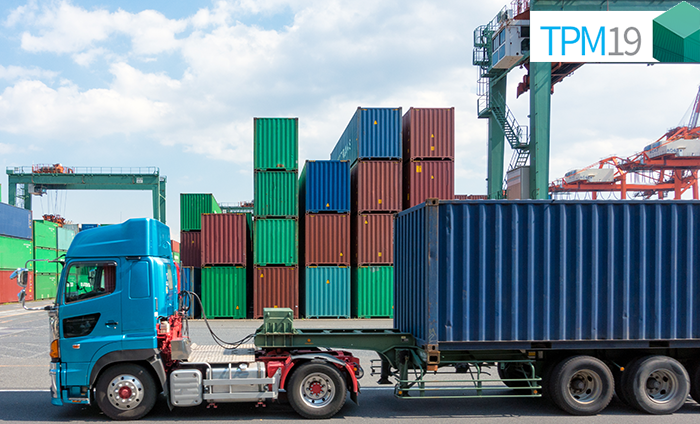 There are many considerations to take into account when deciding between merchant haulage, which is generally more expensive, and carrier haulage, which is often considered less reliable. Photo Credit: Shutterstock.com.

LONG BEACH, California — Time, as much as rising drayage costs, is forcing US importers to decide between container shipping line-arranged door moves and making their own surface transport arrangements through merchant haulage, as Amazon-era demands for speed multiply.

“Our merchant community is competing in a global marketplace with limited time to execute,” said Michael A. Symonanis, director of North American logistics for the global container logistics group at cotton exporter Louis Dreyfus. “Carrier haulage diminished because of that.”

Symonanis and other logistics executives at the 2019 TPM Conference in Long Beach Tuesday debated one of the most fundamental questions in international logistics: who handles the delivery of a container from a port terminal to a shipper’s warehouse? Who should have control?

“Historically, we’ve had strong ocean carrier relations on the door side, but as we continue to grow, we face challenges,” Symonanis told the TPM Conference. “To widen our capacity footprint, we needed to start thinking about how we could utilize carriers in different ways.”

When it comes to its suppliers, Louis Dreyfus is always on the clock. “In the cotton industry, the greatest point of friction is the warehouse and the merchant community themselves,” Symonanis said. Those merchants have “must pick up by times.”

Like a retailer with a “must arrive by” date, Dreyfus’s suppliers penalize the company if it fails to pick up within a certain window, he said. “It’s not purely the transportation cost; we have to pick up on their ready day. It’s a broader consideration in terms of the risks.”

That’s led the Netherlands-based international agricultural shipper to pay for more of its own merchant haulage, arranging pickups for its exports.  “You have to look at how much do I control, how much do I allow the providers we’re working with to control,” Symonanis said.

There are other considerations to take into account when deciding between merchant haulage, which is generally more expensive, and carrier haulage, which is often considered less reliable. It may come down to where a company wants to focus the time and effort of its employees.

“We’re a footwear company, and we want to be really good at designing, producing, and selling footwear,” said Mike Gavle, vice president of Rockport Group, which uses carrier haulage. “We’d rather put human capital into those things than into chasing chassis.”

As a shipper, “you’ve got to understand how everything fits together,” Gavle said. “If you’re signing a store door contract with your ocean carrier, you can nominate your preferred truckers and then let them go figure out [who gets freight]. It has to be an equitable relationship.”

Looking at the big picture

The decision, in many ways, resembles the process shippers go through when determining whether to use for-hire trucking companies, dedicated carriage, or their own private fleet.

“You have to ask whether, internally, you have the bandwidth to handle [merchant haulage]?” Symonanis said during a panel discussion with Gavle and others. “I dispatched 3,500 drays last year. You have to look at your costs in a basket.” And there’s no “either/or” answer.

“We still have some carrier haulage,” Symonanis said. “It gets down to managing customer commitment and managing risk. What’s the right answer in certain operating geographies? We’ve been more merchant-haulage-focused in certain areas than in others.”

A blend of solutions also may work as options, said Dean Tracy, executive vice president and chief operating officer of RCS Logistics. “Previously, I had a hybrid solution, carrier haulage rates, and merchant haulage service,” he told the panel. “That proved for us to be the most viable.”

Carrier and merchant haulage “both work in certain instances,” he said, “but if you have a more complex supply chain and speed of market is important to you, we found the merchant haulage service was more predictable.”