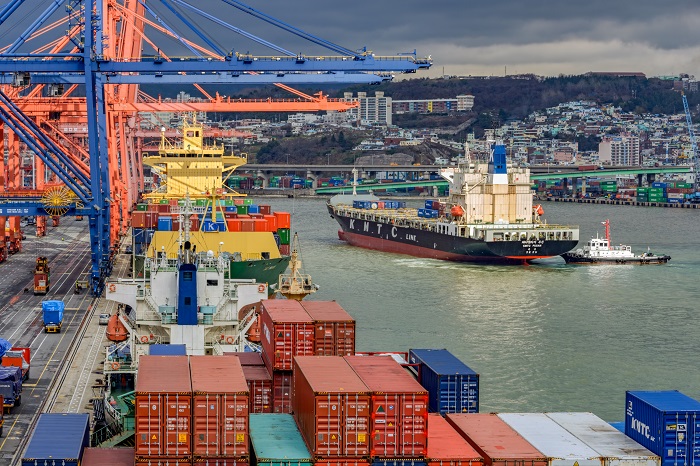 Scores of shipping lines competed for the estimated 30 million TEU in 2016 volume that moved among thousands of port pairs across Asia. Photo credit: Shutterstock.


A key development in intra-Asia during 2018 will be the first-quarter launch of the Korea Shipping Partnership, an alliance of South Korean container shipping companies that will initially target Southeast Asia operations.
The alliance of 14 carriers, set up by the Korea Shipowners’ Association, aims to improve operating costs and address the persistent supply-demand imbalance on intra-Asia routes.
Hyundai Merchant Marine and SM Line are the only two mainline operators in the alliance, which also includes Sinokor, Heung-A, Namsung Shipping, CK Line, Pan Continental Shipping, Dongjin Shipping, Pan Ocean, Dong Young Shipping, Doowoo Shipping, Taiyoung Shipping, Korea Marine Transport Co., and Hansung Line (an affiliate of Sinokor).
The 14 carriers operate a combined capacity of 308,000 TEU on intra-Asia routes, short of the 1.3 million TEU operated by the main non-Korean carriers in the trade.
Arguably the main obstacle to the Korea Shipping Partnership is that Korean carriers are fiercely competitive with each other. Case in point: KMTC and SM Line opted to stay out of the HMM + Sinokor and Heung-A partnership and pursue their own growth plans, industry Alphaliner noted.

That competition extends across all players in the region. Scores of shipping lines competed for the estimated 30 million TEU in 2016 volume that moved among thousands of port pairs across Asia.
Intra-Asia is the world’s largest trade and is growing strongly as demand increases in the Asia-Europe and trans-Pacific trades. The trade is inextricably tied to these two major east-west routes, with much of the regional shipments being driven by the production of components assembled in a final Asian country before being shipped to the foreign markets. This connectivity with the major trades means carriers to a large extent can treat intra-Asia routes as loss leaders. Freight rates on many routes often do not even cover the loading of a ship, let alone the actual transportation of a container.
Although rates remain largely below break-even levels, there is no slowdown in trade, as Asia’s economies lead global growth. The International Monetary Fund (IMF) put 2017 economic growth for Asia and the Pacific at 5.5 percent, up from 5.3 percent in 2016. Growth will remain strong at 5.4 percent in 2018, the IMF forecasts.
“The signs of growth in the region are encouraging so far,” said Changyong Rhee, director of the IMF’s Asia and Pacific Department. “The policy challenge now is to strengthen and sustain this momentum.”
The star in Asia’s economic crown is Southeast Asia, and most of the countries are expected to see accelerating growth in 2018, supported by robust domestic demand. This is seen in the huge increase in online shopping that is supporting demand for container shipping.
The biggest e-commerce provider in Southeast Asia is Singapore-based Lazada, which said brand and cross-border sales volumes soared three to four times in October, on a year-over-year basis. Goods that are less time-sensitive and rely on forward inventory systems close to markets — the preferred e-commerce supply chain model — use ocean shipping as a go-to mode of transportation. This e-commerce supply chain model is more cost-effective and allows for e-commerce-specific services that are well-integrated with logistics.
The intra-Asia trade traditionally refers to the region stretching north as far as Korea and Japan, east to the Philippines, south to Indonesia and west as far as Myanmar. Another region often included in intra-Asia is South Asia, where growing exports have led to the rolling out of new services by container lines confident that India and Pakistan, the subcontinent’s powerhouses, will continue to generate rising volumes.
“Future growth seems assured as consumer demand remains high in India, while Pakistan stands to be one of the major beneficiaries of Chinese One Belt, One Road investment,” London-based shipping analyst Drewry noted in a recent report.
Contact Greg Knowler at greg.knowler@ihsmarkit.com and follow him on Twitter: @greg_knowler
Maritime News›International Freight Shipping
International Logistics
International Logistics›Logistics Providers
Asia
Asia›China
Asia›India
Asia›Indonesia
Asia›Japan
Asia›Myanmar
Asia›Pakistan
Asia›Philippines
Asia›Singapore
Asia›South Korea
Maritime
ARO Issue Year:
2018

Freight Data Insights Report: A Look Back To Look Ahead
Download