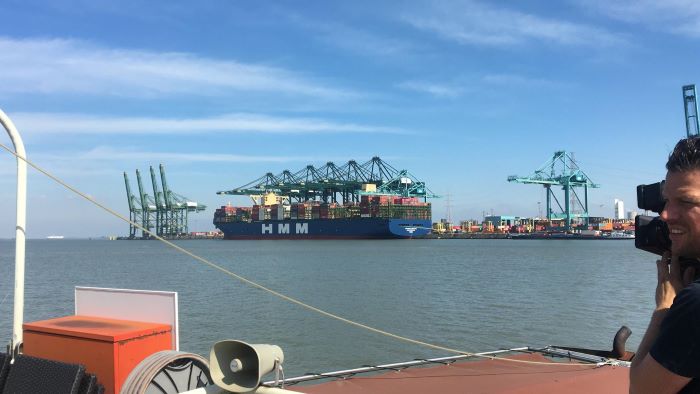 HMM is the latest carrier to report strong improvement in financial performance despite plunging volumes, with its first-half results reflecting container carriers’ newfound ability to match capacity with falling demand while maintaining — and even increasing — rates.

The South Korea–based shipping company carried 21 percent fewer containers in the first six months of the year at 2.24 million TEU, a drop of almost 500,000 TEU. Over the same period, average spot rates rose 12 percent as sailings were blanked and bunker costs fell 11 percent, pushing HMM’s operating profit up 60 percent. The carrier posted a $31 million net loss in the first half, a substantial improvement over the $314 million loss recorded in the first half of 2019.

But HMM has warned that the profitability it has enjoyed on the trans-Pacific and Asia-Europe trades in the first half is threatened by an uncertain market through the second half. The carrier cited the possibility of a second wave of the coronavirus disease 2019 (COVID-19) emerging in the winter months, and growing geopolitical tensions between the United States and China as two important variables that could affect trade over the rest of the year.

HMM’s results follow those of Ocean Network Express (ONE), which reported a $167 million profit in its first fiscal quarter ending June 30 compared with a $5 million profit during the same quarter of 2019. ONE attributed the earnings growth primarily to stronger ship utilization through blank sailings and lower bunker fuel prices.

Cosco Shipping subsidiary OOCL reported its first-half operating results earlier this month, and even with a 4.6 percent year-over-year decline in volume to 1.68 million TEU, the carrier grew its revenue 1.1 percent to $1.58 billion.

Hapag-Lloyd and Maersk Line will release their interim results later this month, and the carriers, both industry bellwethers that tend to outperform their peers, are likely to report a profitable first half. The positive results will underscore analyst expectations that the container shipping industry could end the year with a $9 billion profit if it maintains its control of capacity.

Despite its cautious view of the second half and uncertainty surrounding the escalating US–China trade dispute, HMM expects rates on the trans-Pacific to remain elevated over the short term, driven by an increase in volume as US economic activity increases.

Retailers in the US are forecasting that August could be the busiest month of an early and highly unusual trans-Pacific peak season following a July that saw US imports from Asia grow year on year for the first time since September 2019. Total US containerized imports fell 3.5 percent year over year in July, but volumes from Asia ticked up 0.9 percent after declining for nine consecutive months dating back to October 2019, according to PIERS, a JOC.com sister company within IHS Markit.

HMM has more measured expectations for the Asia–North Europe trade for the second half, forecasting relative balance in supply and demand. Asia–Europe volume slid 3.8 percent in June to 1.39 million TEU compared with the same month in 2019, according to the latest data from Container Trades Statistics (CTS). But the June volume shows a trade recovering after volume fell almost 20 percent and 14.5 percent year over year in April and May, respectively.

Global Shipping Outlook: A Sneak Peek at 2021
Port Performance North America: Managing Cargo Flow During a Pandemic — and Beyond
END_OF_DOCUMENT_TOKEN_TO_BE_REPLACED