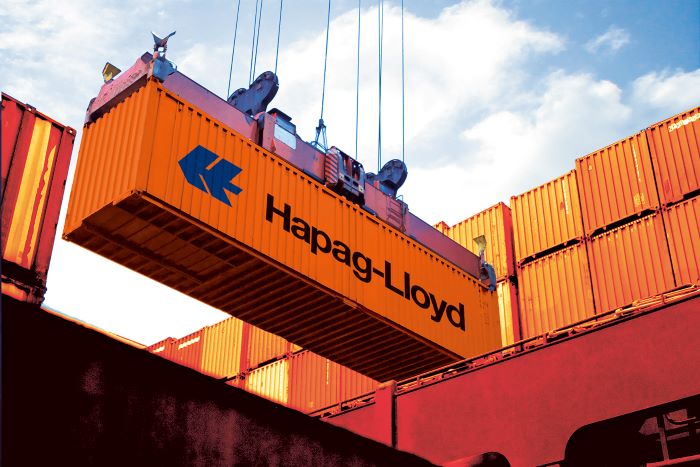 So far, 2020 has been a good year for Hamburg-based Hapag-Lloyd, despite the impact of COVID-19. Photo credit: Hapag-Lloyd.

Hapag-Lloyd sailed to a highly profitable first half, with the bulk of its earnings growth made in the second quarter as the carrier matched capacity with an 11 percent drop in volume during the COVID-19 lockdowns.

Apart from a marginal decline in revenue compared with the first six months of last year — down less than 1 percent to $7 billion — all key first-half indicators for the Hamburg-based carrier were positive. But it was the second quarter where much of the heavy financial lifting was done.

Hapag-Lloyd built on a good start to 2020, aggressively managing capacity through the peak pandemic period to quickly cut operating costs and elevate rates from April through June, even as volume fell 11.1 percent to 2.7 million TEU. Earnings before interest and taxes (EBIT) in the second quarter grew 96.4 percent over the year-ago period to $387 million, while earnings before interest, taxes, depreciation, and amortization (EBITDA) increased 47 percent to $770 million.

The strong second-quarter performance, combined with a 3.1 percent increase in average freight rates to $1,104 per TEU, led Hapag-Lloyd to a solid first-half result, with the $314 million net profit almost double that of the same period in 2019.

But even as the ink dried on his convincing P&L report, Hapag-Lloyd CEO Rolf Habben Jansen was cautious with his second-half expectations, warning in an earnings call Friday that “the pandemic is by no means over.” He pointed to COVID-19 infections rising in Europe and parts of Asia and sweeping through the US and South America.

“It is very easy to get carried away by optimism when you have a couple of good weeks, but we are seeing bookings varying by 20 percent up or down from one week to another, something we normally do not see, which shows the uncertainty that is still out there,” he said.

Habben Jansen said carriers had no option but to react to the volatile demand the uncertainty created in the container shipping market, with blank sailings likely to remain a key strategy going forward.

“If demand drops away quickly, the only thing you can do is blank sailings because you just have to save costs,” he said. “If you don’t operate a sailing, you save 60 percent of the costs associated with that. When we see things are getting better, like we see now, you also need to react quickly and put services back in, as we are doing.”

He said Hapag-Lloyd had planned to remove the same level of capacity from global trades in the third quarter as it had during the second, but rising demand on the major trades meant “considerably less capacity” had been taken out. “I would estimate that the capacity we will take out [in Q3] is at a mid-single digit percentage,” Habben Jansen told analysts and reporters.

Hapag-Lloyd follows other carriers in reporting strong year-over-year performance. Key to the earnings improvement of the carriers is their capacity management; combined with peak season demand currently being seen on the trans-Pacific and Asia-Europe trades, it continues to drive up spot rates. Maersk Line will announce its results Aug. 19.

On the trans-Pacific, the rate this week from China to the US East Coast rose almost 12 percent to $3,913 per FEU, and was up 8.3 percent on China-US West Coast routes, to $3,406 per FEU, according to the Shanghai Containerized Freight Index (SCFI). China-North Europe rates increased 0.7 percent to $916 per TEU, while China-Mediterranean rates were up almost 3 percent to $967 per TEU.

Still, Habben Jansen said the market should not “get carried away” by the performance of the SCFI during the second half, despite the rising rates.

“The spot market is different, and some trades are strong because of the peak seasons, and some are weak,” he said. “But a big chunk of our business is contracted, and all those contracts contain bunker fuel clauses. On the back of a drop of bunker prices in Q2, that automatically places us at lower rates in Q3 even if bunker prices go up.”

Global Shipping Outlook: A Sneak Peek at 2021
Port Performance North America: Managing Cargo Flow During a Pandemic — and Beyond
END_OF_DOCUMENT_TOKEN_TO_BE_REPLACED