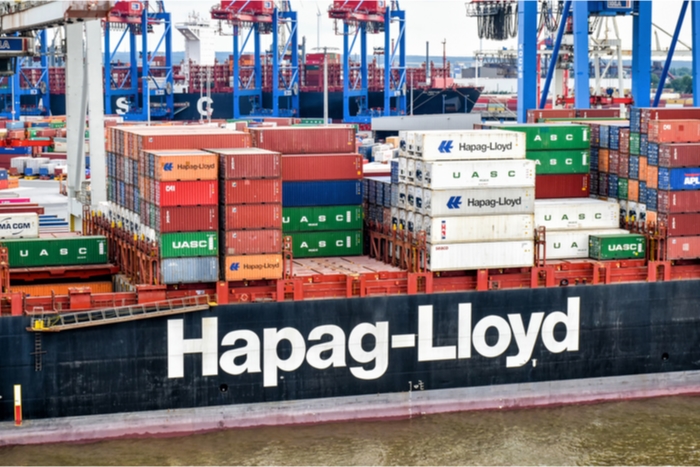 Hapag-Lloyd saw its year get off to a good start, but the solid performance will quickly fall off through the second quarter. Photo credit: Shutterstock.com.

Hapag-Lloyd is heading for a low double-digit decline in volume in the second quarter when the greatest impact of the coronavirus disease 2019 (COVID-19) will be felt, CEO Rolf Habben Jansen said Friday.

Announcing the carrier’s solid first quarter results, Habben Jansen said the expected drop in second quarter volume was based on April's performance and the carrier’s current bookings and loadings.

“We see a steep decline in the course of the second quarter and expect it will run into the third quarter, then improve through Q4, with a solid recovery in 2021,” he told analysts during an earnings call. “But we will only be able to judge that in about six months.”

It was a strong start to the year for the Hamburg-based carrier that increased its volume 4.2 percent in the first three months to just over 3 million TEU, accompanied by an average freight rate increase per TEU of 1.4 percent, to $1,094. That enabled Hapag-Lloyd to post a 6 percent year-over-year increase in revenue for the first quarter, to $3.7 billion.

However, rising bunker costs as the IMO 2020 low-sulfur mandate was introduced from Jan. 1 pushed up transport costs by almost 10 percent and eroded earnings that were further impacted by a $64 million devaluation of bunker inventories as the oil price declined rapidly through the first quarter. That pulled down earnings before interest, taxes, and depreciation (EBITDA) by 7 percent to $517 million and left first quarter net profit at $27 million, down $82 million compared with the first three months of 2019.

Based on the premise that the second quarter would see the peak impact of COVID-19, followed by a gradual recovery, Habben Jansen said the guidance provided by the carrier earlier in the year of EBITDA at $1.84 billion to $2.38 billion and earnings before interest and taxes of $540 million to $1.8 billion still holds. However, he added a caveat — unless there was a recovery in demand for container transport services earlier and stronger than those outlined in the market studies cited in Hapag-Lloyd’s first quarter's financial report, the upper end of the forecast ranges would be barely achievable.

“Although we were able to pick up a bit of tailwind at the beginning of the year, we anticipate that the coronavirus pandemic will have very significant impacts in 2020, beginning in the second quarter,” he said.

In a LinkedIn post, Lars Jensen, partner and CEO of Sea-Intelligence Maritime Consulting, said Hapag-Lloyd had managed to substantially grow its volume in a global environment where volume declined 5 percent in the first quarter.

“In a nutshell, when compared with Maersk, which also had a good Q1 under the circumstances, Hapag-Lloyd has favored volume growth but has seen slightly less increase in rates whereas Maersk saw stronger increases in rates but lower growth in volumes,” Jensen said.

“However, unlike the other carriers, which for now appear to shy away from making any predictions of profit for full-year 2020, Hapag-Lloyd maintains its view from the annual report a few months ago,” he added.

Simon Heaney, container research senior manager at Drewry Shipping Consultants, said in a market outlook update this week that the industry will not see any year-over-year growth rates in volume until the first quarter of 2021, although the volume will start to improve quarter on quarter.

“The second quarter is the nadir, the worst of it, and then the third quarter will be roughly the same as the first quarter volume, but obviously the growth will be bad because that is the peak season period,” he said. “But in terms of annualized growth, you won’t see that until the first quarter of 2021. Then you will see some mega growth rates from the second quarter next year.”