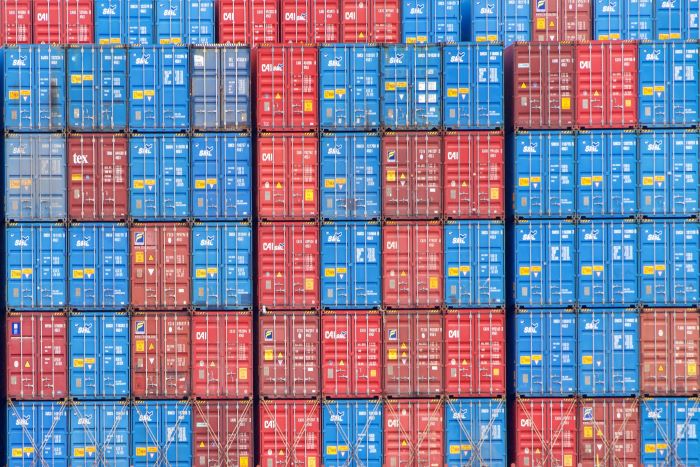 The immediate root cause of the spike in empty containers is the first-half inventory surge that collided with weakening consumer demand in the spring and summer. Photo credit: Shutterstock.com.

The inevitable consequence of the first-half inventory buildup that continues to force dozens of ships to wait at anchor off major US East Coast ports is that the containers that carried those goods must eventually be unloaded and sent back empty to the ports. That’s exactly what’s happening now, sources tell JOC.com, unleashing yet another wave of disruption on a still-precarious US supply chain.

The disruptive impact of a “mounting challenge of returning empty containers to the marine terminals,” as US Federal Maritime Commissioner Carl Bentzel put it, is magnified by the fact that ocean carriers lack the incentive they had last year to rapidly reposition those containers back to Asia.

Due to more than a doubling of new containers manufactured last year to more than 5 million TEU, according to the container lessor Triton International — a response to the spike in pandemic demand for containerized goods — there is now more than enough equipment in Asia to satisfy shippers’ demands, according to several shippers who spoke to JOC.com this month. For ocean carriers, loading empties when they are not needed at origin is costly and further delays services that in many cases are still operating far behind schedule.

“When you put a ship into New York and you’re already five, six, seven days behind schedule, you have a choice to make: You can take as many export-laden containers as you have, but do you leave your ships alongside loading empties, further delaying getting back on schedule, or do you cut and run? The carriers have been cutting and running to try to regain service levels,” said Craig Grossgart, senior vice president of ocean at SEKO Logistics. “That is always the decision you have to make because the loading of empties is pure cost and no revenue in this market because [carriers] are flush with equipment in Asia.”

The situation is a sharp contrast to 2021 when carriers, seeking to capitalize on record eastbound trans-Pacific spot rates, spared no effort in rushing empty containers back to Asia, denying service to many exporters in the process. This prioritization of empties over exports ignited a political firestorm in Washington, DC, that led to the June signing of the Ocean Shipping Reform Act of 2022.

Recent behavior by carriers reflects the surplus in containers. “In the past, the carriers were not returning any expired equipment. They were holding on to it,” Grossgart said. “Now, they are returning the equipment as soon as the lease has expired.”

That is reflected in container pricing. According to Container xChange, used container prices in China are down 50 percent from a year ago, while one-way leasing rates for containers from China to the US dropped 17 percent from June to July. "There are more reasons for shippers to rejoice as the average container prices and one-way leasing rates (from) China show a downward trend at a time when shipping is historically at its peak," Container xChange CEO Christian Roeloffs said in statement Thursday.

The empty container surge will likely continue for a number of months before ultimately running its course, like many prior and largely unanticipated surges of containerized cargo that affected port flow.

But until that happens, the return of empty containers en masse is contributing to worsening congestion at major gateways such as the Port of New York-New Jersey. The congestion is triggering conflict over per diem charges when shippers are unable to return empties because there are already too many containers dwelling on terminal property. Following a meeting at the port on Aug. 3, FMC Chairman Daniel Maffei zeroed in on excessive empties and the need for them to be removed as a chief cause of the port’s current congestion woes.

“When ocean carriers continue to bring thousands of containers per month to a port and only pick up a fraction of that number, it creates an untenable situation for terminals, importers and exporters, trucking companies, and the port itself,” Maffei said in a statement. “The commission will ask the carriers that have fallen the most behind in picking up their empties what their plan is to rectify the situation.”

A worsening trade imbalance has exacerbated the surge of empties at ports such as New York-New Jersey; while import volumes have surged, export volumes have stagnated so empties represent a greater percentage of outgoing containers. At New York-New Jersey, loaded imports grew 36 percent in the first half of 2022 versus the same 2019 period, while exports fell 10 percent, according to the port’s published data.

The immediate root cause of the spike in empty containers is the first-half inventory surge that collided with weakening consumer demand in the spring and summer, hurting profits and stock prices of major retailers. Containerized imports from Asia in the first seven months of this year were up 6 percent from the same period in 2021 and 32 percent from the same period in 2019.

While loaded containers of inventory were often left to idle at marine terminals, at inland railheads, and outside distribution centers because inventory wasn’t immediately selling, now as those containers get unloaded and their contents put into downstream distribution steams, retailers say empties are being put back into circulation in large quantities.

“In Q1 and then in Q2, as the backlog of containers work itself through … we’ve ingested all that inventory,” John David Rainey, CFO at big-box retailer Walmart, said during an Aug. 16 earnings call. “We’ve largely gotten out of the container storage and movement business.”

How to Improve OTIF: 15 Tips for On Time and In Full Delivery
END_OF_DOCUMENT_TOKEN_TO_BE_REPLACED