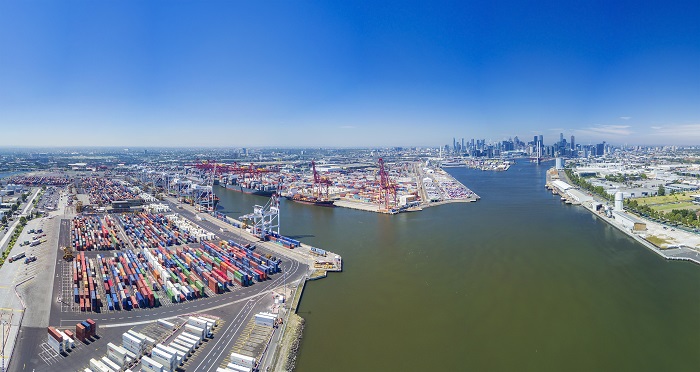 
Container volume on the Asia-Australia-New Zealand trade is expected to soar in 2018, and while the 5 to 7 percent growth in demand predicted by carriers will be driven by traditional economic reasons, rising tensions between Beijing and Washington have the potential to further push up China imports on the north-south trade.

US tariffs on steel and aluminum have sparked retaliatory tariffs by China on US products, and with Australia and New Zealand among China’s top sources of fruits, aluminum, and pork, the countries could benefit from the trade dispute.

Data from IHS Markit’s Global Trade Atlas (GTA) clearly show the areas where Australiaand New Zealand are well positioned to pick up any slack in China’s US imports. New Zealand is second behind the United States in exports of apples, pears, and quinces to China, while Australia is also China’s number two trading partner in citrus fruit. Other products where the two South Pacific nations see strong Chinese import demand are grapes, wine, and nuts.

China’s increasing income, rising middle class, and consumer demand for perishables, plus improving GDP in Australia and New Zealand, helped generate solid 2017 throughput growth at the ports in both countries.

In Australia, the country’s busiest container port of Melbourne also added 100,000 TEU in 2017 to its annual throughput, but that growth has strengthened into 2018. In the first two months of the year, Melbourne volume has increased by 12 percent to 426,000 TEU. In its fiscal first half (July to December), New South Wales Ports’ Port Botany recorded an 8 percent increase in volume to 1.35 million TEU, while Brisbane’s January volume was up almost 9 percent.

Hong Kong’s OOCL and Singapore’s APL are expecting the remarkable demand on the trade to continue this year, although competition and surplus capacity could limit profitability on the busy trade route.

An APL spokesperson was optimistic about the trade and expected volume to grow by 5 to 7 percent in 2018 as demand exceeded supply, particularly in the peak periods. He said strong competition meant the carrier had to offer a portfolio of services with a competitive cost structure and transit times.

OOCL’s growth forecast for the Asia-Australia/New Zealand trade was slightly more moderate at 4 to 5 percent for 2018, a spokesperson for OOCL told JOC.com. “Competition in this trade has been fierce over the past year and we believe the industry may face tough challenges in gaining market share and meeting vessel utilization objectives through 2018 if larger capacity containerships move into the trade from the cascading effect.”

The cascading of larger vessels will not help the chronic rate volatility that has characterized the north-south trade in the past year, something OOCL put down to the supply-demand imbalance and seasonality factors in the market. Data from SeaIntel Maritime Analysis show capacity scheduled to be deployed on Asia-North Europe in the second quarter will grow by 8.8 percent year over year, while Asia-Mediterranean capacity will rise by 6.5 percent. The vast majority of the capacity will be in the form of mega-ships, forcing larger vessels out of Asia-Europe and down to the north-south trades such as Asia-Oceania.

“We are currently in the post-Chinese new year slack season and we hope that the imbalance will improve during the second half of 2018 when we hit the traditional peak season for this trade, particularly southbound from Asia to Australia,” the OOCL spokesperson said.

The GTA shows total Chinese exports to Australia and New Zealand had a five-year compound annual growth rate of 7.5 percent, with Chinese exports reaching 13.9 million tonnes (15.3 million tons) in 2017. However, China’s imports from Australia and New Zealand only reached 848,000 tonnes, and although this represented year-over-year growth of almost 7 percent, the trade imbalance is creating headaches for carriers.

OOCL said the equipment imbalance and relocation costs of empty boxes continued to be a challenge on the trade with greater volume of laden boxes heading southbound than those moving northward.

This can be seen in the container data of Australian ports. For instance, almost one-fifth of container exports from the Port of Melbourne in 2017 consisted of empties. In Brisbane, 35 percent of the 121,869 TEU exported in January were empty.