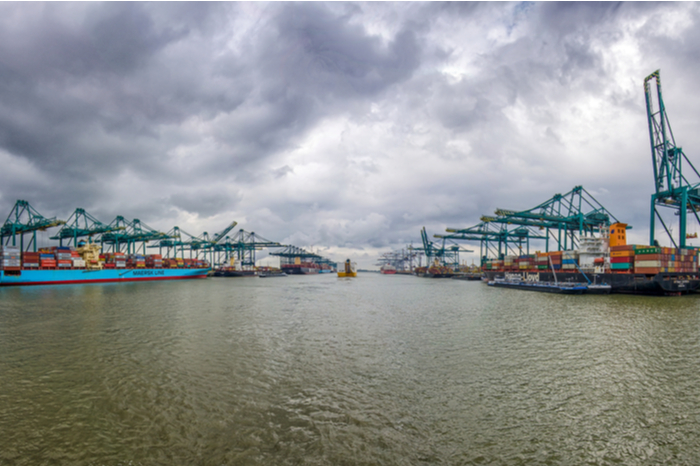 Faced with economic upheaval in the major European markets and a steep drop in demand for containerized imports from China, carriers have significantly cut their capacity levels on the Asia-Europe trade. Photo credit: Shutterstock.com.

Europe is facing a sharp contraction in economic activity this year, with the latest trade outlooks revealing the impact that measures taken to limit the coronavirus disease 2019 (COVID-19) will have on countries across the Eurozone.

The United Nations Conference on Trade and Development (UNCTAD) said in a global trade update released Wednesday that incoming data for the second quarter indicated a dramatic decline in global trade, with the trade contraction from the COVID-19 pandemic likely to be greater than that seen during the global financial crisis of 2008-09.

UNCTAD expects a decline in trade of about 20 percent for 2020, in line with the World Trade Organization (WTO) that is forecasting a 13 to 32 percent decline in international trade this year, but slightly less optimistic than the European Commission, which expects trade among its 27 member countries to decline by 10 to 16 percent in 2020.

The latest 2020 economic outlook by the Organization for Economic Co-operation and Development (OECD) forecasts significant GDP contractions from the continent’s largest economies. The OECD warned Wednesday that the UK’s economy will contract by 11.5 percent in 2020, with France declining 11.4 percent, Italy 11.3 percent, and Germany 6.6 percent. Should there be a second wave of the coronavirus in Europe, the economic impact will be even greater.

Faced with such economic upheaval in the major European markets and a steep drop in demand for containerized imports from China, carriers have significantly cut their capacity levels on the Asia-Europe trade as they try to match the weak demand.

The major carriers shared similarly gloomy outlooks in recently released first-quarter financial results, with the only variance being in the level of expected demand. Hapag-Lloyd, for instance, is expecting a “low double-digit” decline in volume for the second quarter, while Maersk is expecting volume to drop by up to 25 percent.

Looking ahead, Hapag-Lloyd CEO Rolf Habben Jansen said container shipping demand would remain “very fluid, so things could get better or they could get worse. Based on what we can see right now, I expect some sort of recovery in the third quarter and further improvement running into Q4, but I don’t think this year we will reach the volumes we saw in 2019,” he said.

Getting the balance right

To balance this volume with capacity, carriers have blanked 94 scheduled sailings on Asia–Europe routes from April through August as a direct result of the coronavirus, according to Sea-Intelligence Maritime Consulting. The analyst said more withdrawn capacity was expected with the Ocean Alliance yet to announce its Q3 blank sailings program.

The extensive blank sailings have caused capacity out of China to tighten, an issue that will likely become more acute in the second half as some demand returns while blank sailings remain at a high level through August, according to the latest European Shippers’ Council-Drewry shipper satisfaction survey.

In the survey of 227 shippers and forwarders, the respondents said space availability was their top concern, with booking reliability and carriers’ financial stability also shaping their freight procurement choices going forward.

“These are key factors of carrier and forwarder selection, particularly in today’s disrupted market, but also in the next year as and when ocean-borne volumes recover,” Philip Damas, head of the logistics practice at Drewry, said of the annual survey findings.

Shippers contacted by JOC.com said the limited available capacity being offered by carriers meant import plans had to be highly flexible, with additional lead time built in to compensate for cargo rolling, missed sailings, or terminal delays because of manpower issues.

The South China-based logistics manager for an Asia-Europe shipper said demand was not returning evenly as economies reopened across Europe.

“Even for a single shipper, it still depends on the type of products they have on offer,” he told JOC.com. “For instance, garments are different from furniture, so the order patterns will vary. But the high runners and year-round products need availability in shops, so they have to be brought in continuously.”

A Germany-based shipper said he was still managing to secure enough capacity. “Space wise, I do not feel the burden yet and we manage to ship everything on time somehow, even with much of the fleet lying idle,” he said. “In the end, we will replenish goods from Asia, though for the time being we are postponing that until September or October and are only ordering out-of-stock items. We still have enough goods in our regional warehouses to supply our needs and expect to be back on track by the end of Q4.”

The supply chain director at a European retailer said so far, all his containers have been transported from China to Europe as planned. “Right now, we see capacity out of Asia is becoming tight, but we have not had major problems since we go through accurate allocation planning with every carrier on a monthly basis,” he said.